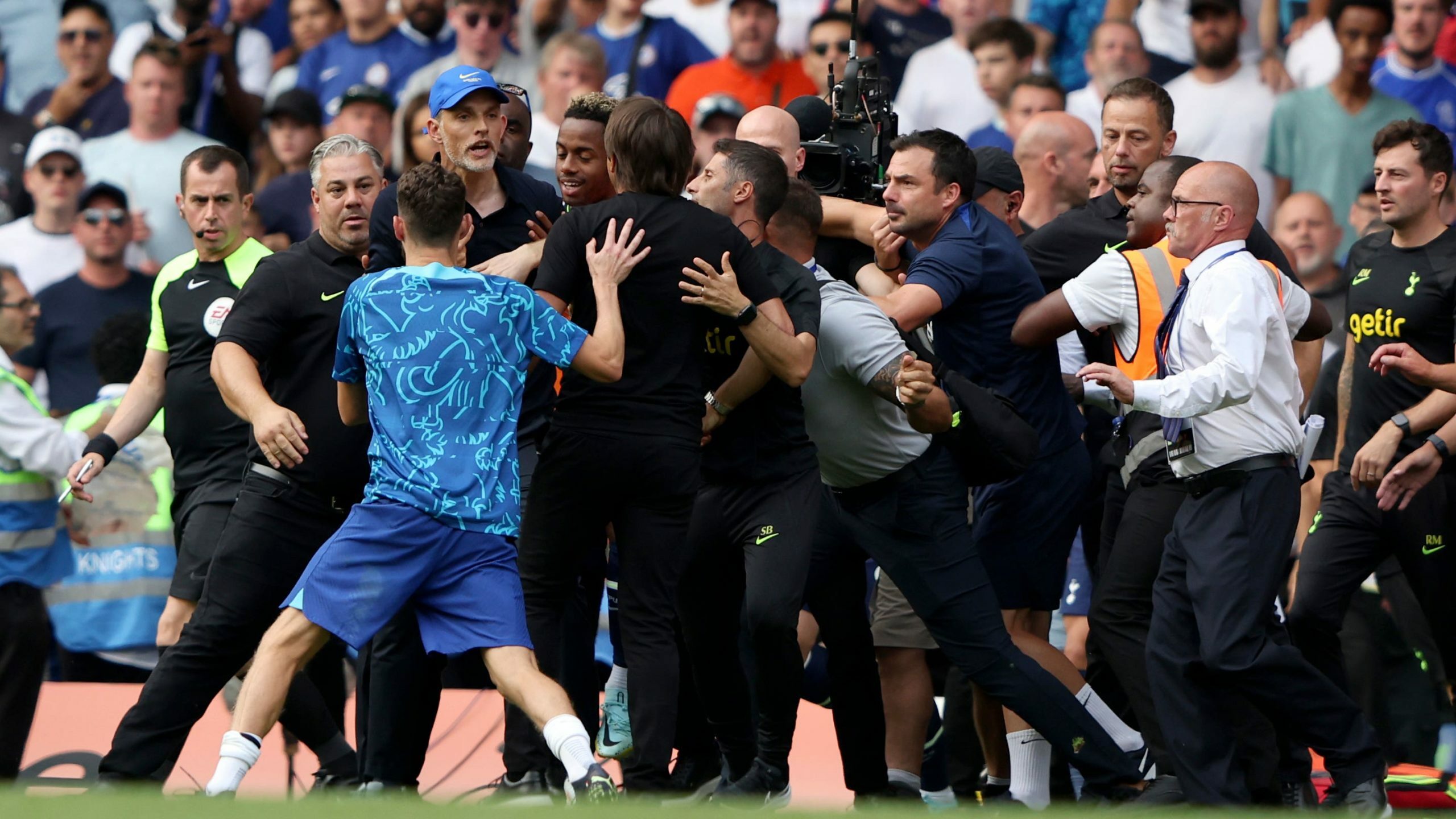 Antonio Conte pleased with Tottenham’s fight in comeback at Chelsea

Antonio Conte hailed the fight of his Tottenham team and insisted they showed they have “good blood” after a heated 2-2 draw at his old club Chelsea.

Spurs have only won once at Stamford Bridge in the Premier League era and lost three times to Thomas Tuchel’s team back in January, but fought back on Sunday to salvage a dramatic point.

While Chelsea were the better team and led 2-1 going into stoppage time after Kalidou Koulibaly and Reece James goals, Harry Kane’s dramatic equaliser added to Pierre-Emile Hojbjerg’s initial leveller to earn the visitors a point.

Conte, who had celebrated their first effort wildly, received a red card from referee Anthony Taylor following a second heated exchanged with rival boss Thomas Tuchel, but the Italian was eager to focus on the positives in the aftermath of a white hot battle.

He said: “I think the celebrations involved on both sides were really good celebrations, yes? The run, then the jump and you can understand about these celebrations because the feeling about us and Chelsea for this game.

“I think this game is an important game for both clubs. For sure for me it was important because to lose three games in a row against the same coach I don’t like.

“I hate to lose and you know very well I try to transfer my mentality and my passion into my players because you can be good tactically, technically but then you need good blood in your veins to fight for something important.

“I think we have started a process in this aspect and today I am happy because my players wanted to stay in the game despite the difficulty of the game.”

After being second-best for much of the first half, Conte switched to a 4-2-4 formation with summer recruit Richarlison introduced for his debut in the 57th minute.

The number of attacking players on the pitch contributed to Tottenham winning the ball back for Hojbjerg to equalise and while the same tactics also saw them caught out for James’ goal, another substitute Ivan Perisic produced a wonderful delivery from a stoppage-time corner to help Kane head in.

“In this game Chelsea showed to be better than us. We can do better, but we scored twice. In the last three games we didn’t score, so we got a point and showed in my opinion character and personality,” Conte insisted.

“We have to work on this system because the second goal we conceded was because defensively we were very poor, very poor.

“If we stayed with three centre backs for sure we wouldn’t concede this goal, but this could be a good option for us.

“Yeah, we can switch sometimes to play in this new formation but for sure we need to work and have the same knowledge that we have in 3-4-2-1.”

Giovani Lo Celso was not part of the squad and later on Sunday evening Tottenham confirmed the midfielder had completed a season-long loan to Villarreal.

The Argentina international spent the second half of the 2021-22 campaign with the LaLiga side and has returned there, but there is no obligation for the move to be made permanent, the PA news agency understands.

Instead, Spurs have inserted a break clause where they can listen to offers for Lo Celso and end the loan early if they wish to let the 26-year-old depart on a permanent basis in January following the winter World Cup in Qatar.