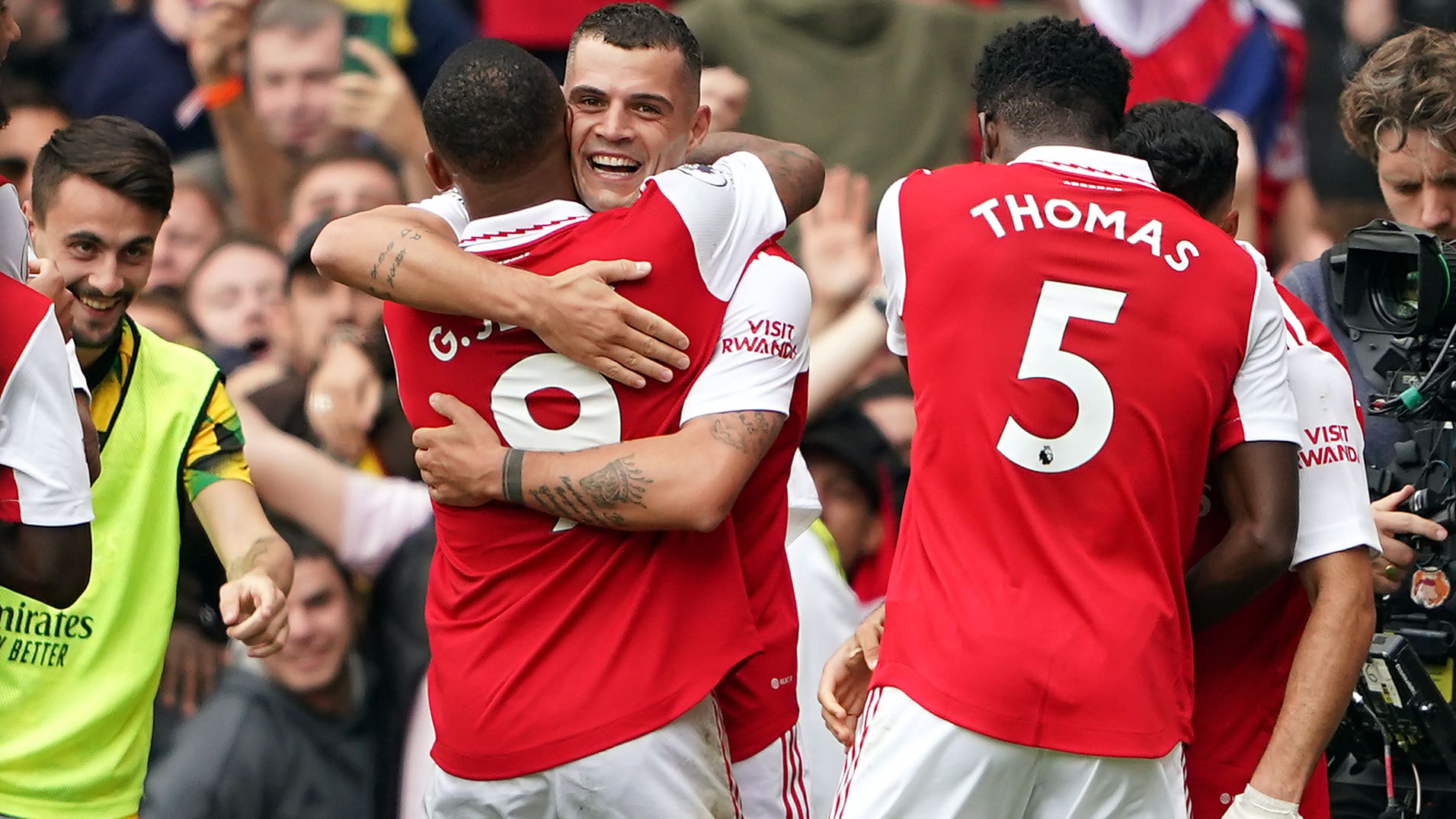 Arsenal retained their place at the top of the Premier League with a fine north London derby victory over 10-man Tottenham.

A rare Thomas Partey strike and goals from Gabriel Jesus and Granit Xhaka secured a well-deserved 3-1 win, Spurs losing for the first time in the league this season having equalised through Harry Kane’s penalty.

Partey got the ball rolling with his first Arsenal goal from outside the box in his 65th match for the Gunners, with Kane levelling from the spot to take his tally in this fixture to 14 in 18 appearances.

But the second half belonged to the hosts, Jesus striking on his north London derby debut and Xhaka continuing a fine run of form either side of Emerson Royal’s red card for Spurs.

It was a rousing start from Arsenal, Gabriel Martinelli forcing an early corner with a low drive as Mikel Arteta’s men built on a raucous atmosphere inside the Emirates Stadium.

Spurs held their resolve though and arguably should have taken the lead themselves, Richarlison prevented from getting a clean strike at goal by team-mate Eric Dier as Aaron Ramsdale made a smart save.

Xhaka then arrowed a shot wide before his midfield partner showed him how it is done, Partey shaping up and curling home a fine finish for just his third Arsenal goal.

The lead would last just 11 minutes, however, a rash challenge from Gabriel Magalhaes on Richarlison leading to a penalty which Kane converted with the usual aplomb to continue his excellent form in this fixture, seven of his 14 goals against Arsenal coming from the spot.

Arsenal slowly regained their composure and Jesus danced past two defenders before testing Hugo Lloris just before the interval.

Arteta’s side started the second-half at the same high intensity and soon reaped their rewards as Jesus restored their advantage.

Lloris could only palm a Bukayo Saka shot into the path of Cristian Romero, the ball ricocheting back under the Spurs captain and allowing Jesus to tap into a open goal from point-blank range.

The Brazil forward should have headed in a second of the afternoon moments later but sent his effort well wide when picked out unmarked by Saka.

Tottenham’s task was made all the more difficult just after the hour when Emerson was shown a straight red card for a foul on Martinelli – who was then almost immediately involved in Arsenal’s third.

The Brazilian bundled his way towards goal, the ball ultimately breaking into the path of Xhaka, who finished superbly.

Conte responded by making four substitutions but the game was beyond his side by that point.

Arteta, too, was able to make alterations, resting Partey, Martin Odegaard and Jesus as they all came off to standing ovations.

The Gunners had been roundly beaten in the reverse fixture last season, a 3-0 defeat in May that all-but put pay to their Champions League hopes.

Now though, they remain top of the table having won seven of their eight Premier League games and with a chance to once again prove their credentials when Liverpool visit north London next Sunday.