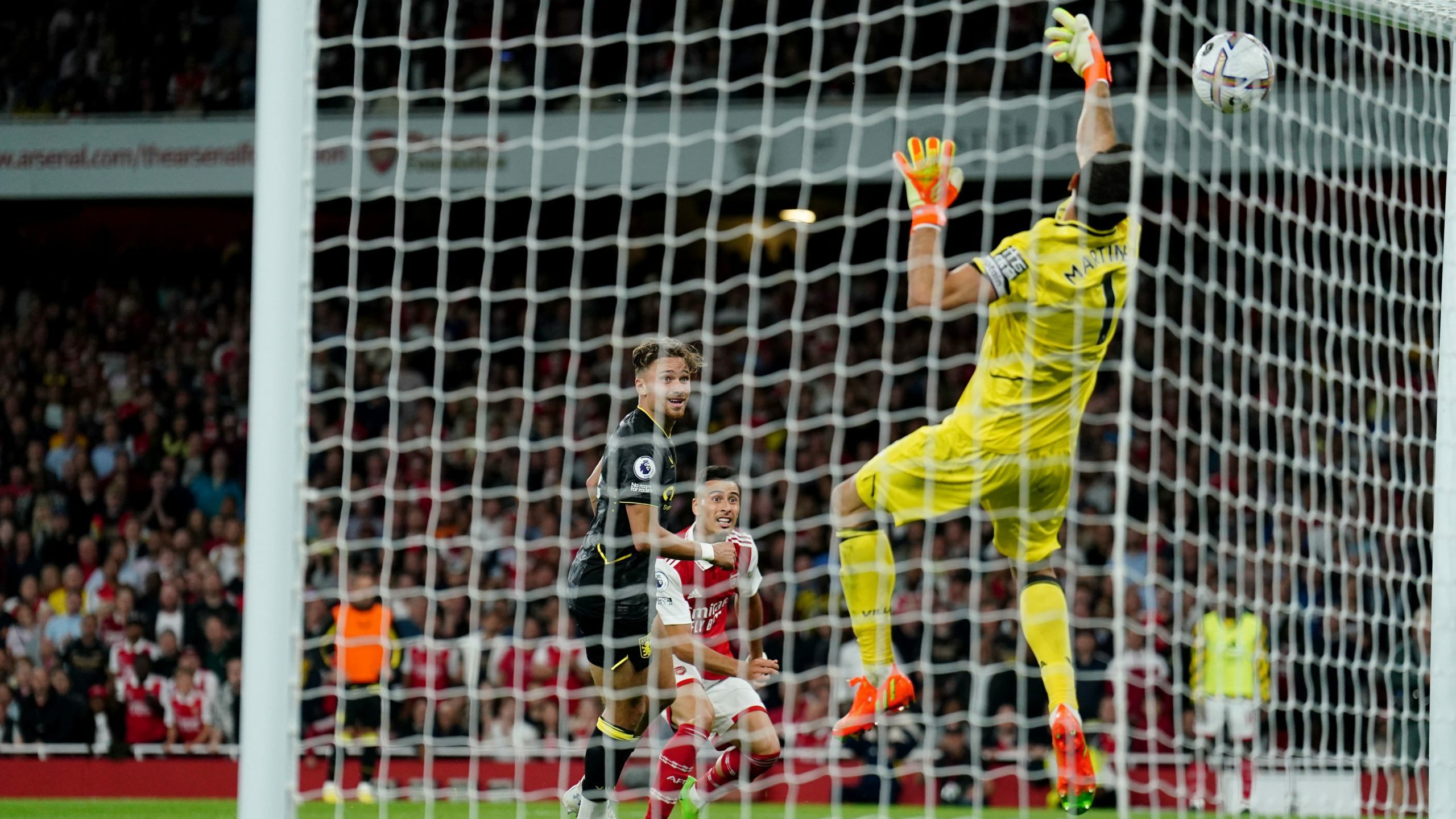 Arsenal edged to a fifth successive Premier League victory of the season as Gabriel Martinelli hit the winner against Aston Villa on a night of questionable goalkeeping at the Emirates Stadium.

A deserved 2-1 win meant the Gunners remained top of the table with a perfect record, with Martinelli settling the game after Douglas Luiz had levelled direct from a corner.

Ex-Arsenal goalkeeper Emiliano Martinez had earlier gifted Gabriel Jesus the opener as Steven Gerrard’s side slipped to a fourth defeat, heaping the pressure on the former England captain.

For the second home game in a row, Mikel Arteta’s Arsenal showed their guile to seal the three points after they had come from behind to beat Fulham four days earlier.

It was all the home side in the first half, with Bukayo Saka wanting a penalty early on after seemingly being dragged to the ground by the returning Tyrone Mings.

A VAR check sided with referee Robert Jones and no spot-kick was awarded, much to the chagrin of Saka.

Jesus was played in over the top by a smart Martin Odegaard pass but his low effort was turned behind by Martinez.

It was pinball in the penalty box from the resulting corner with Villa unable to clear their lines and the ball eventually dropping to Gabriel Magalhaes, whose shot was deflected behind.

Mings was the last line of defence to block an Odegaard strike but Villa had ridden their luck one too many times.

Martinez failed to deal with a simple cross-cum-shot from Granit Xhaka, pushing the ball straight into the path of Jesus, who made no mistake.

The Argentina international was clearly rocked by the mistake and soon put the ball out for a corner when trying to take it around Saka.

The visitors somehow survived another goalmouth scramble before Martinez showed just how good he can be, tipping behind a Martinelli effort while at full stretch.

He was in the thick of the action as the second half got under way, saving well from an Odegaard free-kick before tussling with Jesus.

As Arsenal toiled for the second goal, Gerrard turned to his bench and introduced Philippe Coutinho and Luiz.

The latter was instantly involved as he whipped in a corner that flew directly in for the equaliser, Aaron Ramsdale this time the keeper at fault as his cries for a foul were turned away by a VAR check.

It turned out to be just the wake-up call Arsenal needed to move through the gears and they regained the lead just three minutes later.

Martinelli passed into substitute Takehiro Tomiyasu, who laid the ball off for Saka to cross to the back post where Martinelli had drifted in unmarked to score, Martinez again suspect in the Villa goal.

The hosts saw out the remainder of the contest with relative ease to extend their winning run – with Real Madrid, with three victories out of three in LaLiga, the only other side to boast a perfect start from the top five leagues in Europe.