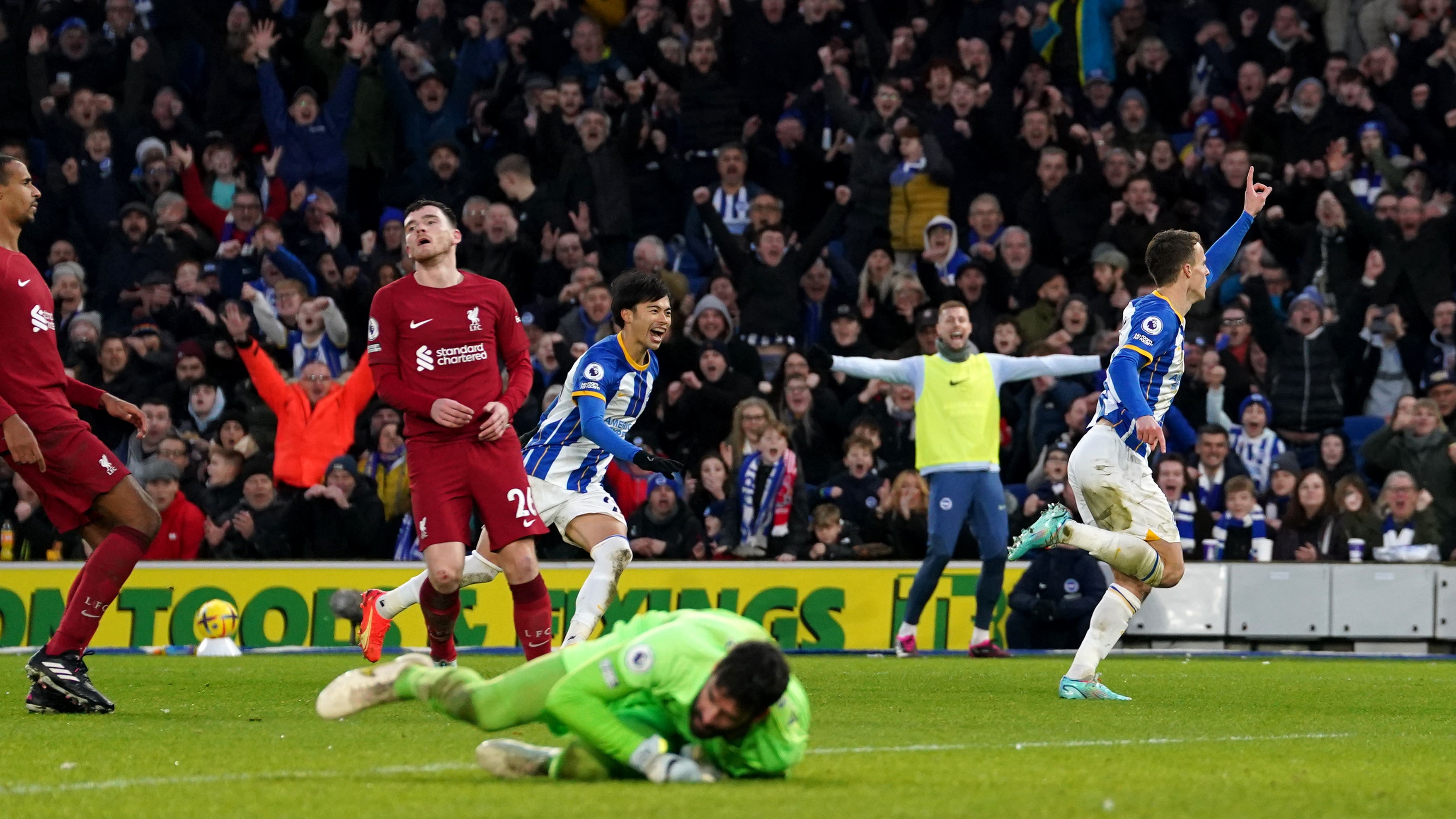 Brighton march above Liverpool in table with stunning home victory

Solly March scored twice as Brighton set aside the absence of wantaway star Leandro Trossard to inflict another setback on Liverpool’s stuttering season with a superb 3-0 win.

Substitute Danny Welbeck wrapped up Albion’s victory after March’s quick-fire double early in the second period put them on course for a resounding success.

Jurgen Klopp’s stunned visitors had no response to being outplayed at the Amex Stadium, leaving the Seagulls to leapfrog them into seventh position.

Pre-match talk on the south coast was dominated by Trossard being dropped by head coach Roberto De Zerbi due to his attitude before a statement from his agent outlined his desire to leave Sussex.

But Brighton proved they can still produce their scintillating best without the Belgium forward as they ripped apart the Reds with a sensational display on a memorable afternoon.

The 2020 Premier League champions have now dropped a staggering 26 points this season, with just 18 games gone.

De Zerbi’s men had the Reds rattled from the outset, benefiting from slick passing, high intensity and a willingness to take risks in possession.

Argentina international Mac Allister, who was afforded a standing ovation ahead of his first start since returning from Qatar, threatened with an early header from a Pascal Gross corner after Alexander-Arnold turned behind March’s dangerous cross-shot.

The depleted visitors struggled to gain a foothold in the game and were restricted to opportunities on the counter-attack during a first half in which they failed to register an attempt on target.

Roared on by the home crowd, Albion continued to control proceedings, with Mitoma dragging wide after once again bursting away from Alexander-Arnold.

Brighton thought the breakthrough moment had arrived four minutes before the break, only for a penalty award to be overturned by VAR after replays showed March was offside prior to being brought down by Alisson.

Albion’s frustrations were alleviated by a rapid start to the second period.

Liverpool initially contributed to their own downfall, conceding possession outside their own penalty area, allowing the lively Mitoma to skip beyond Alexander-Arnold and deliver a low cross for the unmarked March to slot home in the 46th minute.

Klopp’s side had barely regrouped when March doubled the advantage seven minutes later with a fine finish into the right corner from just inside the 18-yard box after being slipped in by Evan Ferguson.

The swift double – March’s first goals at the Amex Stadium since September 2020 – had three sides of the ground rocking.

Elliott skewed wide as the below-par Reds sought to give themselves hope before a chance for Gakpo was snuffed out by Sanchez.

De Zerbi began his tenure with a thrilling 3-3 draw at Anfield at the start of October.

He described that day as “one of the best moments” of his life and was able to celebrate an even greater occasion as Welbeck sealed Albion’s first home league win over Liverpool since 1961 nine minutes from time.

After March’s flick on, the former Manchester United forward expertly lifted the ball over Gomez before thumping a volley beyond Alisson to cap a dominant display.