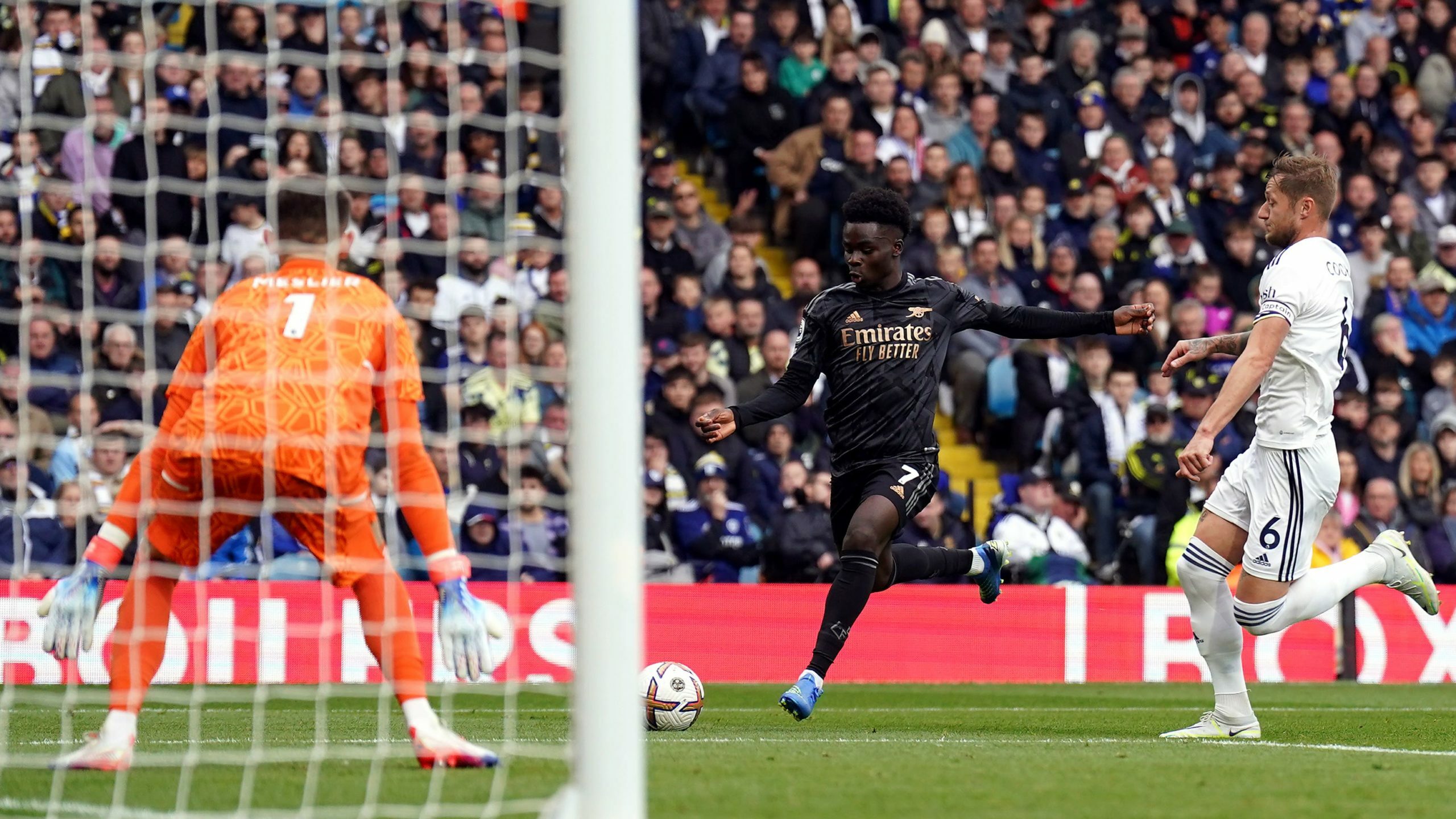 Bukayo Saka’s first-half goal clinched Arsenal a hard-fought and controversial 1-0 win at Leeds and kept them top of the Premier League table.

Saka slammed home an emphatic finish 10 minutes before the interval as Arsenal won for the ninth time in 10 league games this season.

But Leeds, inspired by the half-time introduction of talisman Patrick Bamford, dominated the second period and will feel aggrieved to have lost.

Bamford missed a penalty and Leeds had another spot-kick decision in stoppage time, initially awarded by referee Chris Kavanagh, overturned after a VAR intervention.

Play was suspended by Kavanagh less than a minute after kick-off when all the match officials lost contact with the video assistant referee and goal-line technology due to a power cut.

Kavanagh led the players off the pitch amid a chorus of boos and play did not resume until almost 40 minutes later.

Leeds showed no adverse effects as Luis Sinisterra forced Arsenal’s rearguard on to the retreat before dragging a low shot wide.

Another curling effort from Sinisterra was deflected wide and from the subsequent corner Pascal Struijk’s stabbed effort was saved by Aaron Ramsdale.

Arsenal then broke ominously down the other end and Gabriel Jesus lifted his shot over the crossbar after Martin Odegaard’s neat flick.

Leeds continued to threaten though and Rodrigo’s effort was deflected over the crossbar before Brenden Aaronson curled a shot across the face of goal.

But their good start was undone by Rodrigo’s wayward pass deep in his own half, which led to Arsenal’s 35th-minute opener.

Odegaard and Saka combined on the right edge of the area and the England winger slammed home an angled finish into the roof of the net.

Leeds replaced Rodrigo with Bamford at half-time and he thought he had equalised within seconds of the restart, only to be penalised for a push on Gabriel.

The home fans were lifted further when Leeds were awarded a penalty for Saliba’s handball.

Referee Kavanagh was initially unmoved by Leeds’ protests, but eventually pointed to the spot after consulting the replay monitor, only for Bamford to fire wide.

Undeterred by that setback, Leeds continued to crank up the pressure.

Bamford, causing the Gunners no end of trouble, was crowded out in the area as another chance went begging and was then awarded a penalty after tangling with Gabriel.

The referee’s assistant flagged for an apparent kick on Bamford by the Gunners’ defender, who was shown a red card before Kavanagh pointed to the spot.

But after another VAR intervention, Bamford was ruled to have shoved Gabriel first and Kavanagh overturned his penalty decision and also changed the defender’s red card to a yellow.

Leeds then spurned another chance to level deep in time added on when substitute Crysencio Summerville fired over after good work between Bamford and Aaronson.