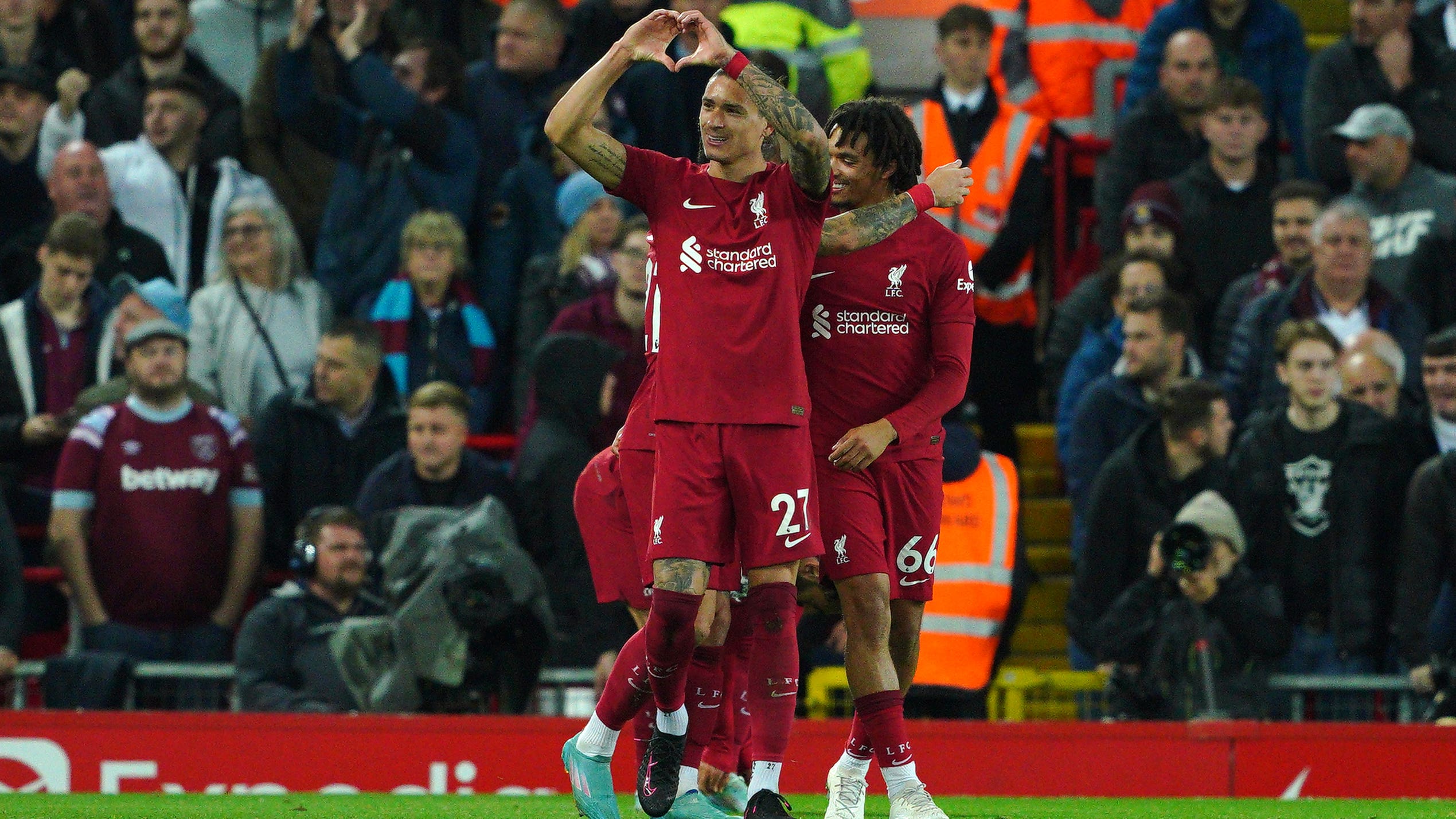 By By Carl Markham PAOctober 19, 2022No Comments

Liverpool striker Darwin Nunez’s first Anfield goal capped an impressive individual performance as a 1-0 win over West Ham was secured thanks to Alisson Becker’s penalty save.

The 23-year-old, a summer arrival in a £64million deal which with add-ons could eventually make him a club-record signing, has had a disjointed start to his Liverpool career but is already becoming something of a cult figure.

His willingness to shoot on sight offers Jurgen Klopp’s side an unpredictability in the final third and West Ham experienced that first-hand in a showreel 45 minutes from the striker, one of five changes from Sunday’s win over Manchester City.

It helped extend Hammers boss David Moyes’ winless run at Anfield to 19 matches and the club’s woeful record to one victory since 1963 and just 10 points out a possible 111.

But they may have eked out a point had another South American – Brazil international Alisson – not come to Liverpool’s rescue by denying Jarrod Bowen’s penalty late in the first half.

Mohamed Salah moved back to the right side of a 4-4-2 to accommodate Nunez, whose role in the team has taken on more significance after Diogo Jota was ruled out until after the World Cup with a calf injury, but it did not affect the hosts’ attacking intent.

They had 11 shots before the interval with the Uruguay international responsible for five of them as West Ham fans’ taunts about being a poorer version of Andy Carroll came back to haunt them.

In the 15th minute Thiago Alcantara, given far too much space by England international Declan Rice and his midfield colleagues, clipped a pass over the top and Nunez allowed it to bounce once before hitting a dipping volley which Lukasz Fabianski did well to tip over.

But the Hammers goalkeeper was given little chance with his second effort seven minutes later when Nunez drifted in front of Thilo Kehrer to meet Kostas Tsimikas’ cross with a downward header inside the far post.

Nunez then robbed centre-back Kurt Zouma but had his near-post drive beaten away and also saw his rasping drive rebound off the after Kehrer’s weak clearance from a delicious Thiago lob pass.

In between those two efforts Salah missed a golden opportunity to double their lead when he was found by Trent Alexander-Arnold in the penalty area and curled a left-footed shot the whole ground expected to see nestle inside the far post only for it to roll wide.

That Liverpool did not score a second goal their dominance warranted was a concern for the home fans when the visitors, who had failed to have a shot and barely touched the ball in the Reds’ area, were gifted a penalty when Joe Gomez inadvisably challenged Bowen to a bouncing ball.

Referee Stuart Atwell was advised by VAR to consult the pitchside monitor and duly pointed to the spot. Bowen stepped up to take but Alisson guessed correctly, diving to his right to parry.

The second half produced more of the same, although Nunez was withdrawn just before the hour to a standing ovation, with Jordan Henderson lofting a shot over, Aaron Cresswell deflecting Roberto Firmino’s toe-poke behind and the woodwork coming to the rescue again as Zouma turned Henderson’s cross onto the bar.

But, with such a slender lead, Liverpool remained vulnerable and they were fortunate when Alisson produced a brilliant close-range stop from Gianluca Scamacca five minutes from time.