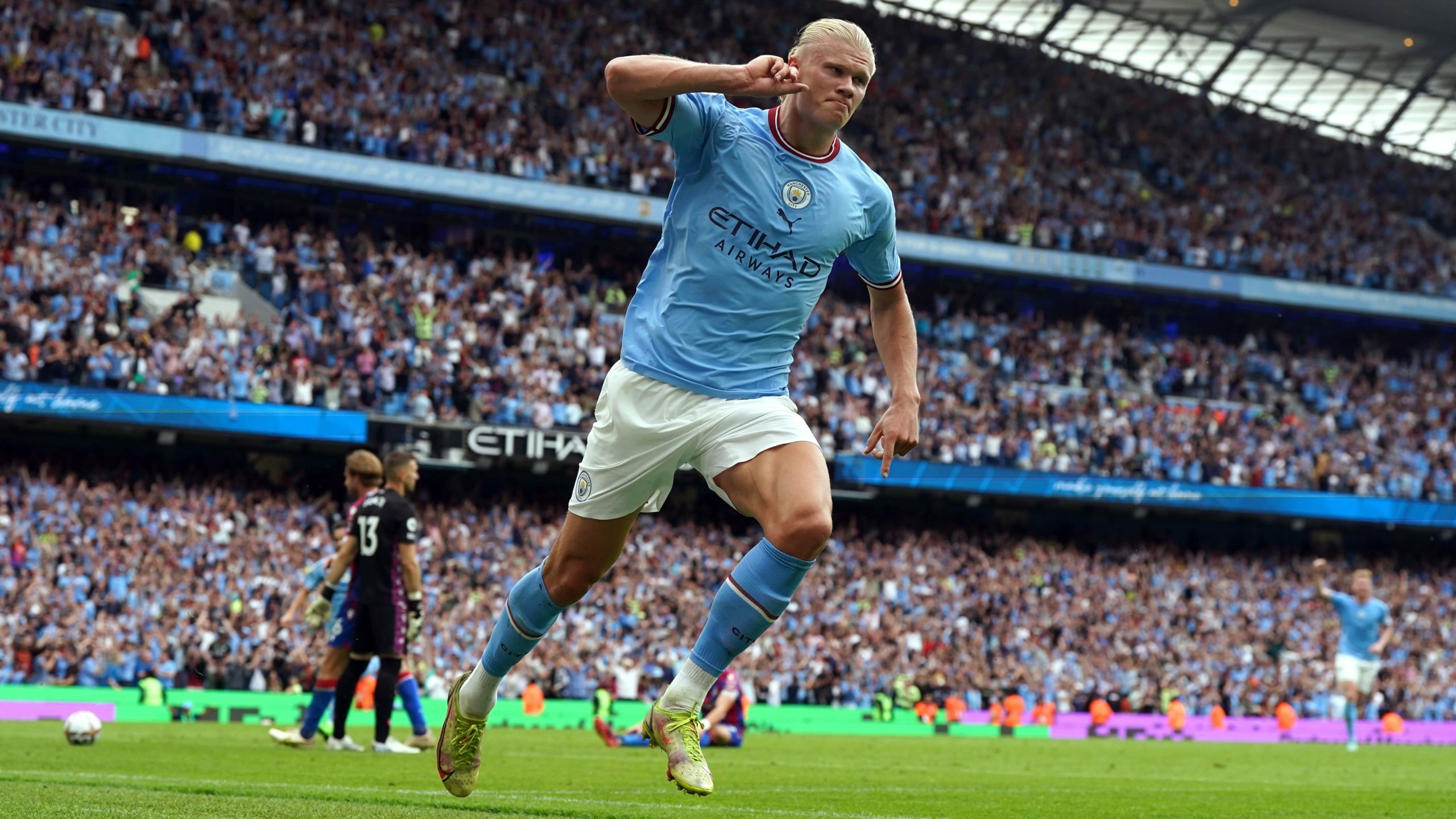 Nine goals in his first five games surpassed a Premier League record jointly held by his Etihad Stadium predecessor Sergio Aguero – and it came about thanks to back-to-back hat-tricks against Crystal Palace and Nottingham Forest, something achieved by only five men previously, with the great Alan Shearer not among them.

Quick out of the blocks

Haaland scored twice on his league debut against West Ham and though he drew a blank against Bournemouth, he was back on the scoresheet in the thrilling 3-3 comeback draw with Newcastle.

Another fightback to beat Palace was sparked by a Haaland hat-trick and he followed up in similar style against Forest as City strolled to a 6-0 win.

His start is eerily reminiscent of Aguero when he arrived in Manchester in 2011. The Argentinian also opened with a brace, against Swansea, followed by a scoreless outing and then a single goal against Bolton and Tottenham respectively. A hat-trick followed against Wigan before Aguero scored both City goals in a draw with Fulham in his fifth appearance – the one time so far Haaland has gone one better. Aguero went on to score 23 league goals that season.

Micky Quinn scored eight in Coventry’s first five games in the inaugural Premier League season in 1992-93. He netted twice in defeat to Manchester City, scored in draws with Sheffield United and Ipswich and added further braces against Southampton and Liverpool – and then against Aston Villa to make it 10 goals in six games.

He has had 22 shots with 12 on target. He also hit the woodwork against Newcastle and the Premier League website records him with four ‘big chances missed’ already.

Six of his goals have come with his trusty left foot, one with his right and two headers – including a ‘perfect’ hat-trick against Forest.

While his goalscoring is the issue in focus, filling the number nine position left largely vacant since Aguero’s departure a year ago, Haaland has also contributed to City’s team play.

He set up Ilkay Gundogan in the 4-0 win over Bournemouth, the only game so far he has not scored in, was denied another assist when John Stones was flagged offside against Forest and is credited with two big chances created. Haaland’s 59 passes attempted average out to 11.8 per match.

His first two have come just four days apart – though on that front Ferdinand has him beaten, scoring his first for QPR against Forest on April 10, 1993 and his second two days later at Everton.

Wright scored consecutive hat-tricks in March 1995, while Rooney did it in 2011 either side of an England brace against Bulgaria.

Drogba’s came in separate seasons as Chelsea beat Wigan 8-0 in the last game of 2009-10 and opened the following campaign with a 6-0 win over West Brom.

Kane is the only man to achieve the feat twice. He netted four at Leicester and three at Hull in the last two games of 2016-17 and then trebled up against Burnley and Southampton that December to set a record of 39 Premier League goals in a calendar year.

Shearer’s 11 hat-tricks never included successive games, though he did have separate instances of two in three games and two in four in 1995. Aguero holds the Premier League record with 12 hat-tricks in total.