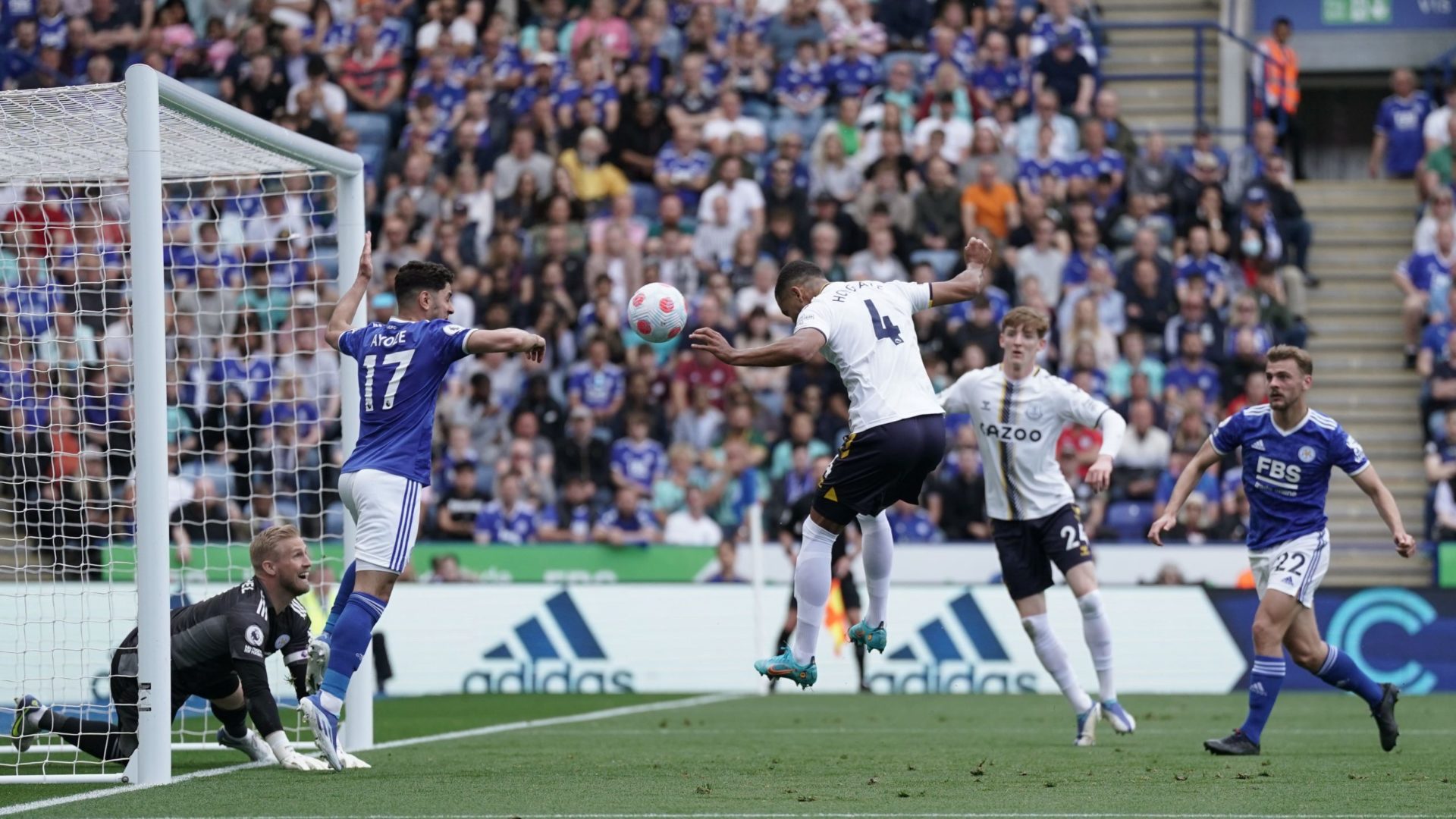 Mason Holgate fired resurgent Everton out of the Premier League relegation zone with the winning goal in a 2-1 victory at Leicester.

The defender’s header secured back-to-back league wins for just the second time this season as the Toffees moved above Leeds, who were beaten at Arsenal on Sunday, and Burnley.

Vitalii Mykolenko’s stunning opener was cancelled out by Patson Daka – following comical Everton defending – but the Toffees recovered to give themselves a huge lifeline.

It was just their second away win in the Premier League this season and first since August.

Trailing Burnley by five points before beating Chelsea last week, the Toffees are now a point above the bottom three after the Clarets lost to Aston Villa and Leeds’ 2-1 defeat to the Gunners.

Everton also still have a game in hand and it represents a dramatic turnaround but they needed three fine second-half saves from Jordan Pickford to earn the points.

Leicester – who lost their Europa Conference League semi-final second leg 1-0 to Roma to bow out 2-1 on aggregate on Thursday – remain 14th.

The Foxes’ season has unravelled having been three points off the top seven at the start of the year with boss Brendan Rodgers ready to revamp his squad in the summer.

Everton, unchanged from their vital win over Chelsea, would have surely been buoyed to see Jamie Vardy only among the substitutes but they needed Yerry Mina to bail them out after three minutes.

The Toffees lost the ball in midfield and Kelechi Iheanacho darted towards goal, he slipped in Daka to beat Pickford but not the sliding Mina who diverted the goalbound shot behind.

But, despite Leicester’s start, it was Everton who grabbed the lead after just six minutes.

The Foxes were slow to react from a throw-in which allowed Alex Iwobi to cross for Mykolenko and he crashed a brilliant volley into the bottom corner from the edge of the area.

Mina’s afternoon then quickly got worse as he soon played his own calamitous part in Leicester’s 11th-minute leveller.

He and Seamus Coleman – neither under pressure – went for the same header 25 yards out only to collide and crumple into a heap.

Daka seized on the gift and ran through to easily beat Pickford for his first goal since February.

It was all Everton’s own making but came just seconds after Kasper Schmeichel had turned a close-range Abdoulaye Doucoure effort onto the post to stop the visitors doubling their lead.

Mina was forced off injured to complete his misery but Everton regained their composure to retake the lead after half an hour.

Again it was Leicester’s Achilles heel, a set-piece, which provided the chance with Demarai Gray swinging in a right-wing corner.

Schmeichel parried Richarlison’s header but the Foxes failed to track Holgate as he was quickest to react to nod in from close range.

It was the 56th league goal the hosts have conceded this season with 18 now coming from set-pieces.

Improvement was needed and Pickford turned Nampalys Mendy’s drive wide just after the hour before Vardy replaced the midfielder with the Foxes desperately seeking inspiration.

The hosts had hardly cranked up the pressure but England’s number one Pickford produced an excellent reaction stop to keep Harvey Barnes out after 68 minutes.

That did spark Leicester into life and Pickford continued his own personal battle with Barnes by pushing his low effort behind with 19 minutes left.

Barnes glanced a header wide as the hosts edged closer to a leveller which never came as Everton celebrated a huge step towards survival.