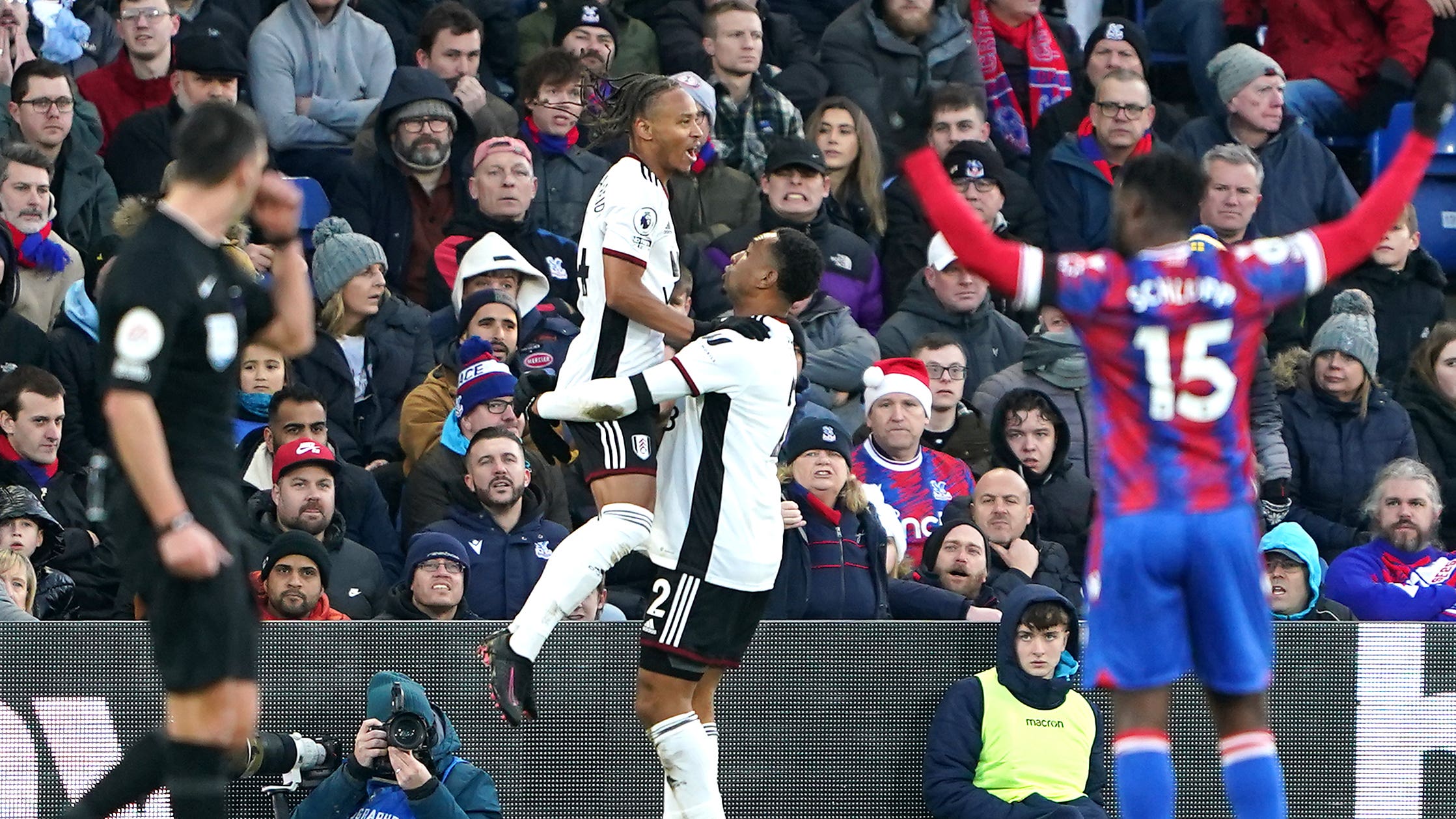 Fulham put their struggles against London rivals firmly behind them with a 3-0 victory over nine-man Crystal Palace, winning a Premier League derby in the capital for only the second time in 29 attempts.

But Palace contributed to their own downfall at Selhurst Park, with Tyrick Mitchell sent off in the first half and James Tomkins following suit before the hour.

Bobby Decordova-Reid put Fulham ahead after 31 minutes before Mitchell was shown a straight red card after 34 minutes and Tomkins – making his first Premier League start for exactly a year – saw a second yellow after 57.

Fulham skipper Tim Ream then scored his first Premier League goal after 71 minutes and Aleksandar Mitrovic nodded in his 10th of the campaign 10 minutes from time.

To mark the passing of their World Cup-winning former England right-back George Cohen last week, Fulham came out in warm-up tops with ‘Cohen 2’ on the back, and a rousing minute’s applause preceded kick-off.

They began brightly and a free-kick from distance by Andreas Pereira forced a fingertip save from Palace goalkeeper Vicente Guaita.

The home side found it difficult to make an impression as Pereira and Harrison Reed controlled the midfield.

Palace’s only clear chance of the first half came in the 27th minute, when a Fulham error allowed Michael Olise to find Jordan Ayew coming in from the right.

The Ghana World Cup man did well to get his shot in before Antonee Robinson could block, but his effort hit the crossbar.

However, Fulham took the lead their early dominance had deserved just after the half-hour mark.

Mitchell hesitated as he went for Joachim Andersen’s under-hit pass and Kenny Tete intercepted before playing the ball forward to Mitrovic on the right. The Serbia striker flighted a perfect cross for Decordova-Reid to glance a header past Guaita.

Palace’s task became even harder three minutes later when Mitchell mis-controlled a pass from Tomkins and made a juddering contact with Tete’s shin in an attempt to win the ball back. Referee Andy Madley had no hesitation in showing a red card, the decision quickly upheld by VAR.

Tomkins, booked earlier for a foul on Mitrovic, departed after 57 minutes after being shown a second yellow card when his raised arm made contact with the Serbian as he ran past the Palace defender.

Pereira hit the outside of the post as Fulham tried to capitalise on their numerical advantage, and Ream finally doubled the away side’s lead when he hooked in a fierce left-foot shot after Mitrovic had nodded back Pereira’s corner from the right.

Referee Madley consulted the monitor after VAR suggested that the ball had hit Mitrovic’s arm, but the goal stood.

Mitrovic then headed home the third himself from close range from Willian’s bouncing pass to wrap up a convincing win.