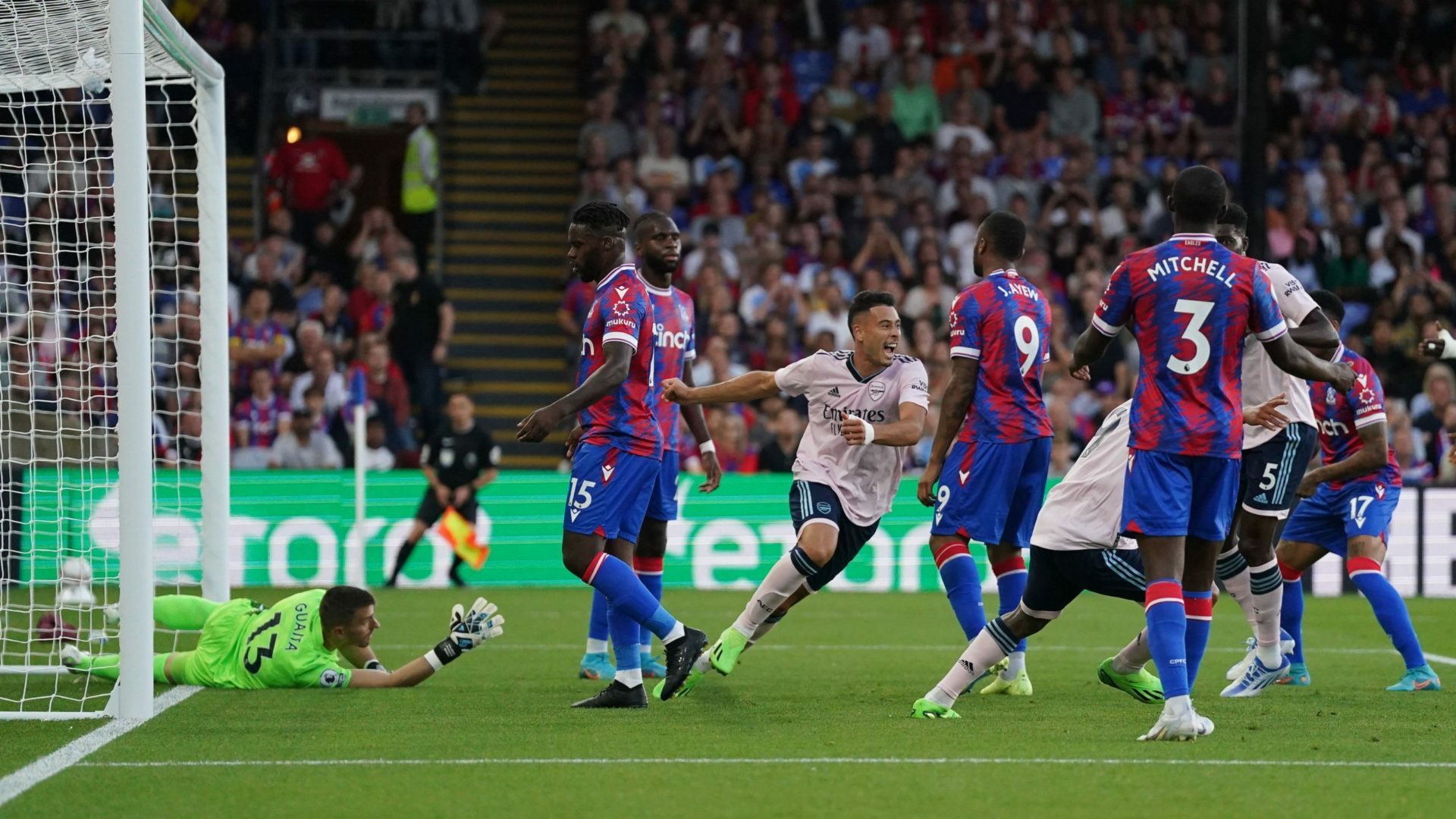 Gabriel Martinelli helped fire Arsenal to the first three points of the Premier League season in their 2-0 victory over Crystal Palace.

Martinelli headed home after 20 minutes as the Gunners made a promising start at Selhurst Park.

And while the hosts returned brighter after the break in a second half that saw few chances for either side, the wind was firmly taken out of their sails when Bukayo Saka’s cross deflected in off the head of Marc Guehi to put the game away.

Arsenal came to Selhurst Park hoping to avoid a repeat of last season’s shock opener when they lost 2-0 at Brentford.

The night began with a bit of last-minute drama for the hosts, who announced the departure of Christian Benteke to DC United after six seasons with the club.

Gabriel Jesus was one of three debutants for Mikel Arteta’s side, with Oleksandr Zinchenko and William Saliba also named in the Gunners’ starting XI.

Arsenal were the first to get a shot in after Jesus cleverly worked his way into the box, dodging two Palace shirts before his shot bounced off Guehi.

The ball landed at the feet of Martinelli at the edge of the area, but the Brazilian’s effort sailed well wide across the face of goal.

Moments later it was Zinchenko who unleashed a shot of his own from nearly the same location, his attempt better-directed but batted away by Vicente Guaita.

The Eagles worked their way back into their attacking end, Eberechi Eze and Wilfried Zaha exchanging passes to move the ball down the left flank but unable to create any real opportunities.

The Gunners piled on the pressure, their debutants showing no sign of first-game jitters in front of the notorious Holmesdale stand.

Finally they got the breakthrough they were looking for off the set-piece, Zinchenko first connecting in the air before Martinelli redeemed his earlier miss, rising highest in front of a crowded goal to nod in the opener.

Guaita prevented the visitors from quickly doubling their advantage, punching away a dangerous corner moments later.

Palace’s best chance came near the end of the half when Joachim Andersen found himself in the box to meet a free-kick, which he headed across goal.

Odsonne Edouard, who earned his place in Patrick Vieira’s starting XI after scoring a brace in the Eagles’ final friendly against Montpellier, was in a good position in the centre of the area and ducked to meet the ball but directed his effort straight at Aaron Ramsdale.

The Frenchman found himself with one final chance to equalise before the break but skied the hosts’ second-best opportunity of the half.

Palace looked brighter after the restart and could have levelled after Zaha issued a pin-point pass to Eze in the centre of the box to set up a one-on-one, but the south Londoner scuffed his effort.

What should have been an easy clearance for Arsenal turned into a scare after the ball bounced off several players and into the hands of Ramsdale, who somehow let it slip away before recovering.

Neither side was able to create many more opportunities, though the hosts asked much more of the Gunners in the second period.

Any hope of splitting the points, however, ended in the 85th minute when Saka’s cross deflected off the head of the unfortunate Guehi and into the bottom left corner.