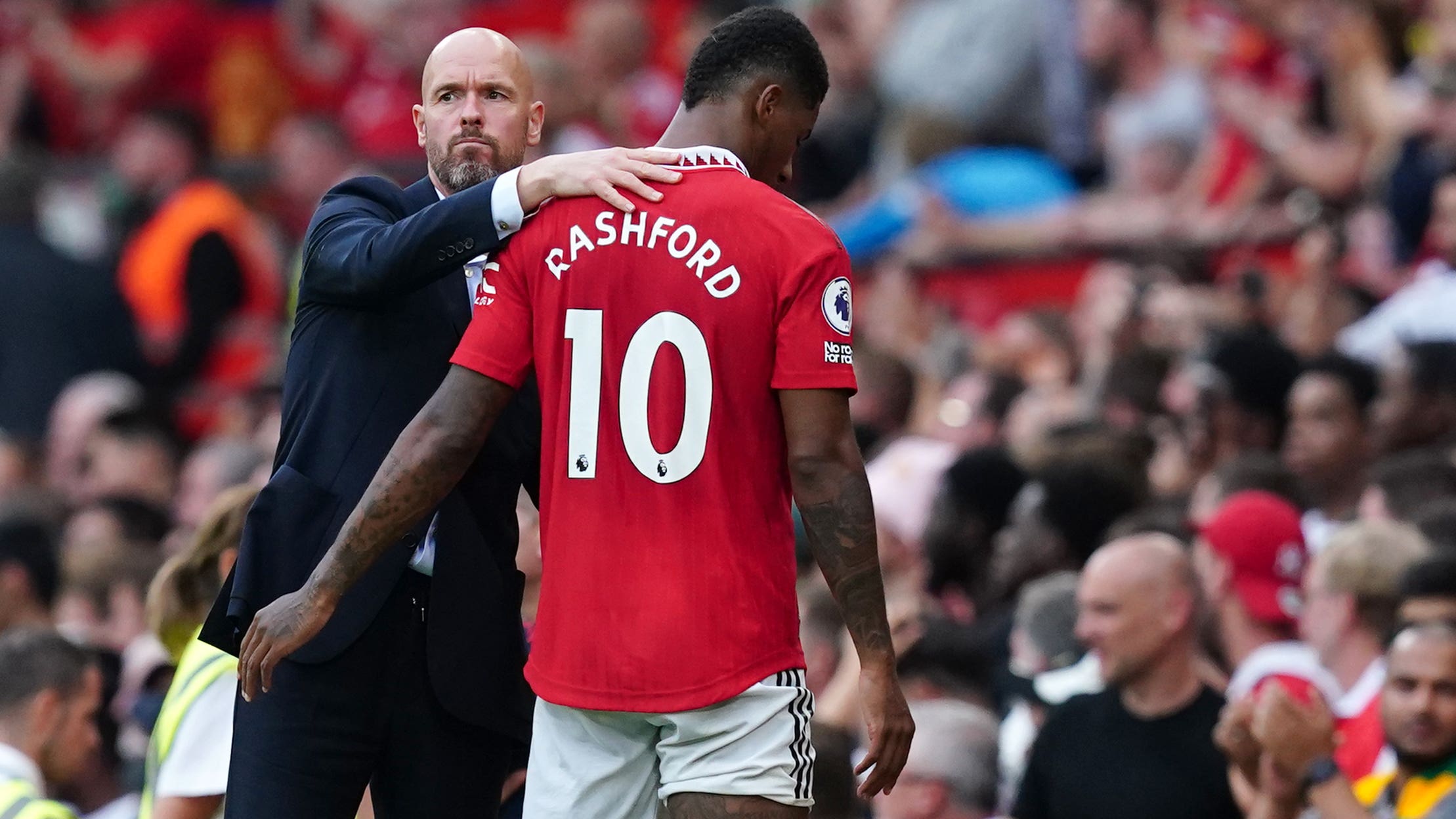 By Press AssociationOctober 29, 2022No Comments

Marcus Rashford says Manchester United manager Erik ten Hag is a “joy to work with” as the rejuvenated forward gradually gets back to his best.

The 2021-22 season was the most challenging campaign of the 24-year-old’s career to date, with last year’s heart-breaking penalty shoot-out miss in the Euro 2020 final loss to Italy compounded by injury, poor form and criticism.

Rashford managed just five goals in 32 appearances during a poor club season on both an individual and collective basis, but things are on the up at United under summer appointment Ten Hag.

The Old Trafford giants remain a work in progress but the meticulous Dutchman’s fingerprints have been clear since pre-season, leading to improved performances and togetherness.

“The manager’s a joy to work with, really,” Rashford told the PA news agency.

“Is it hard work? Yeah, but I think we are enjoying it and we’re playing better football.

“I feel like when we don’t concede goals, we’ve got a good chance of winning games because we’re creating chances.

“We just need to finish them off, be a bit more clinical in front of goal.”

Rashford is United’s top scorer in all competitions but knows he should have more than six goals – a figure that is already one more than he managed last term.

He says he was able to recover mentally and physically from that mightily disappointing campaign during a rare summer off having again been omitted from the England squad for June’s Nations League fixtures.

But Rashford’s upturn in form in recent months has caught Gareth Southgate’s eye, giving him a chance of being named in his World Cup squad after injury extinguished any hope of a September call-up.

“I feel like I’m getting there,” the England international said of his form. “But, yeah, I’m a lot more happy, I’m enjoying myself a lot more.”

Rashford will look to continue that progress when West Ham visit Old Trafford on Sunday, which marks the 85th anniversary of United starting an unbroken run of having academy graduates in every matchday squad.

“You know, we’ve got a lot of games in a short space of time but that’s why we have such a good squad.

“We conceded late on and we still had the courage and the determination to score again late on.

“We were disappointed with the draw, but when you look at the wider scheme of things it’s great character. We know that we’ve got it but to show it is another thing.”

Such character was conspicuous by its absence towards the end of last season under interim boss Ralf Rangnick, but an impressive team spirit has been cultivated under permanent successor Ten Hag.

“I think it’s a little bit of everything, but it’s definitely something that you have to build,” Rashford said.

“We’ve had some new signings come in the summer and we’ve just managed to make it work and build that team spirit as quickly as we did.

“I feel like the players have integrated well and we’re learning about each other more and more.

“But, yeah, definitely, the team spirit is very high and we want to keep that going.

“Good performances help but even in the bad times we are going to stick together.”

Recent results have improved the mood around Old Trafford, which witnessed an exciting full debut from 18-year-old Alejandro Garnacho in Thursday’s 3-0 win against Sheriff Tiraspol in the Europa League.

“I thought Garno was brilliant,” Rashford added. “He expressed himself on the pitch, which is always something that we encourage.

“He just came on and showed no fear. He got at his man, beat him, put crosses in, he pressed well.

“The only thing that was missing, really, was a goal but I think he can be proud of himself.

“He’s had a performance that he can build on now and hopefully he gets more and more minutes. If he plays like that, I’m sure he will.”