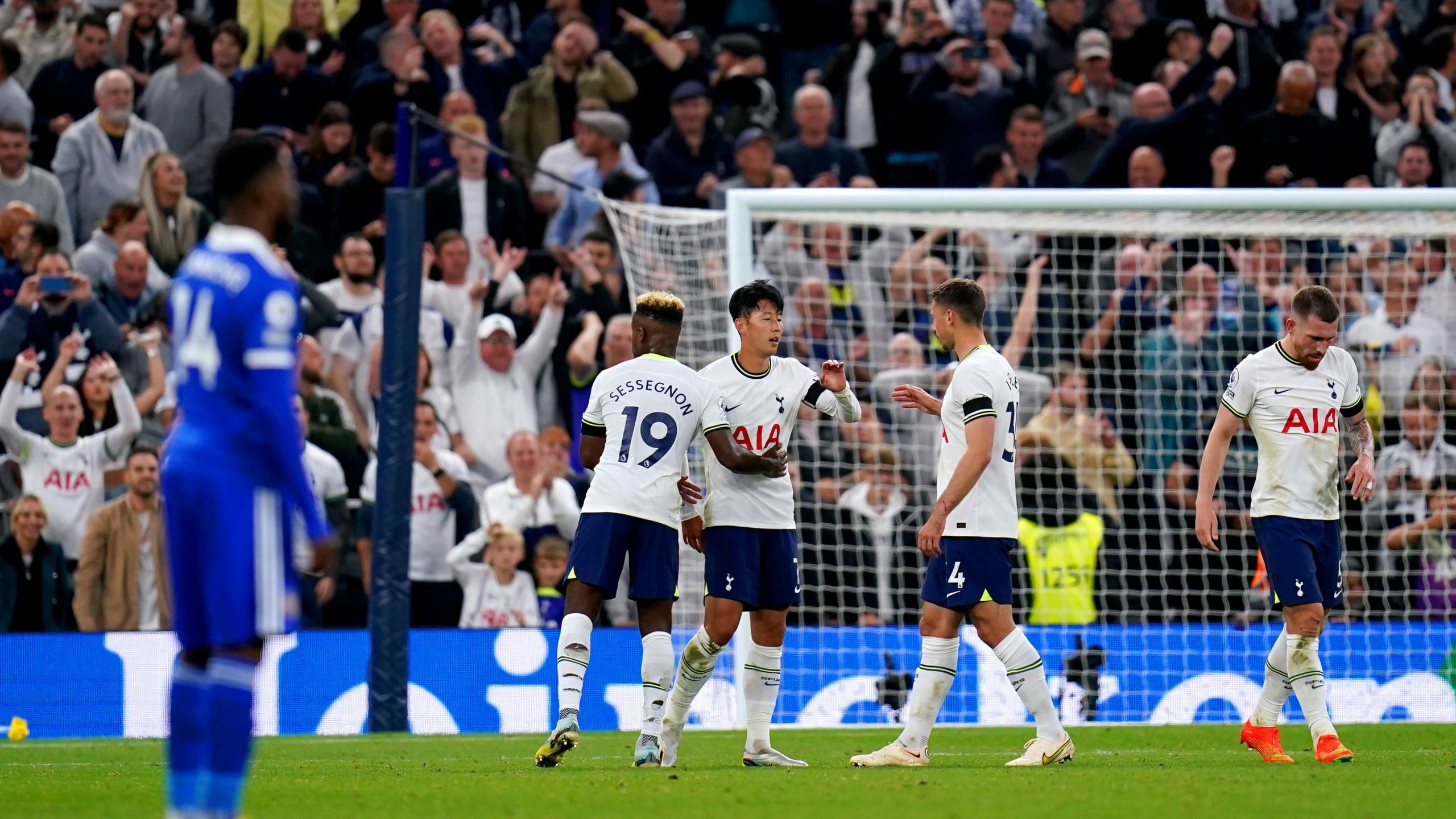 By Press AssociationSeptember 17, 2022No Comments

A frustrated Son Heung-min was glad to respond to being dropped with a sensational hat-trick to help Tottenham hammer Leicester 6-2.

Last season’s joint-top goalscorer in the Premier League had started the campaign with no goals from his first eight matches in all competitions and it saw him named among the substitutes for the visit of the struggling Foxes.

After watching Harry Kane, Eric Dier and Rodrigo Bentancur net during the opening 47 minutes, Son got the chance to get in on the act and responded with two stunning strikes before he completed his hat-trick late on when VAR ruled he was onside.

“It was a top performance and I was really frustrated as well,” he told Sky Sports.

“The way I play I can do much better than I have been. I have been disappointed, the team has been doing really, really good but I was disappointed with my performance.

“My finishing has been poor this season. I’ve also been a little bit unlucky with an own goal, two offside goals and hitting the crossbar. I knew goals were coming and I wasn’t worried.

“I’m really glad the ball finally went in! I was pretty sure I was onside for the hat-trick. I’m glad I’ve been able to help the team, that is really important and I can go to national duty with renewed energy.

“I’m getting emotional to be honest. There has been amazing support and I’ve always felt like I’ve disappointed my team-mates and fans with my performances. They have always been supporting me.”

Conte had hinted during his pre-match press conference that Son could be dropped, citing both him and Kane would be “rotated” at some point.

The Italian was happy to see it pay off after Son curled home in the 73rd minute from outside the area to end his drought in style.

But better was to come with a superb left-footed strike making it 5-2 before the treble was confirmed – albeit after a VAR check – with four minutes left when Son fired past Danny Ward.

“Every decision I am going to take is always an honest decision because I want to win, try to put my players in the best physical condition to put in the best performance for the team.

“For sure to see Sonny with the ball after the hat-trick, then also the trophy for the best player of the game was great. It was amazing for me, for the team-mates because we needed this.

“We, not only Sonny, needed this. I am happy but I repeat this is not problem. If we solve the problem in this way, for sure we have to repeat the situation in the next game with all the players.

“I think in the future, all the players ask me ‘please, please, please put me on the bench’ and then they come in and score three goals, but I am joking of course.”

Leicester shipped five goals at Brighton a fortnight ago but under-fire manager Brendan Rodgers insisted he was still confident of turning around their disastrous start to the new season.

He added: “It is a challenge I will relish because I have never had this spell before in my career. It is definitely something I want to continue.

“There is no doubt the first seven games we’ve had a tough start. We’ve had Tottenham away, Arsenal away, Chelsea away. Manchester United at home and couple of the others we should win.

“It is probably a good time for us to reset everything and break the cycle of the summer as well.

“The owners, they will do what it is they feel they need to do. I am not daft. I know football.

“The last six games, losing, it does not make good reading, but I have every confidence the team can push on and if they play like they did for large parts, cut out mistakes, then they can climb the table.”