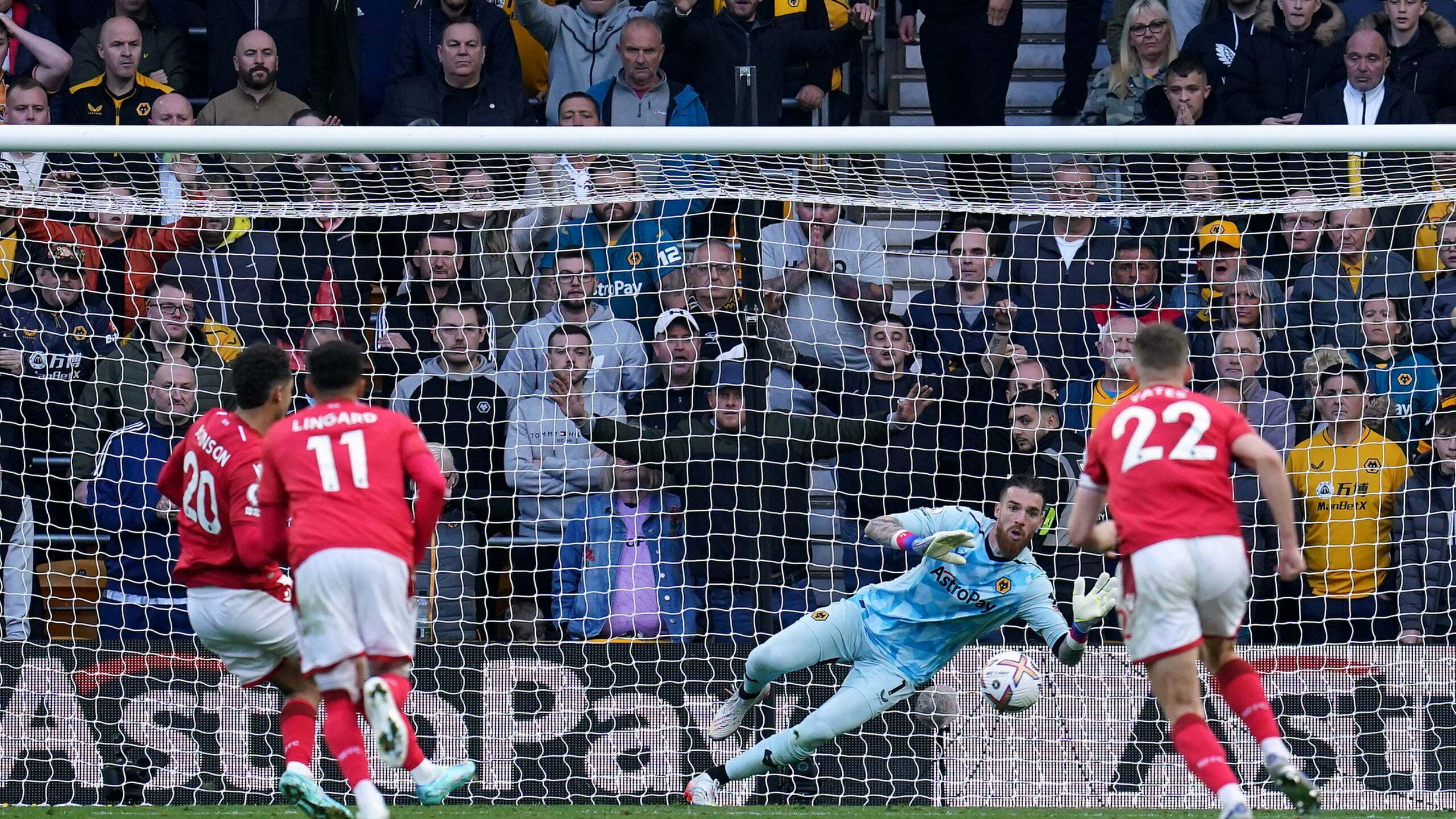 The goalkeeper has been playing with the injury since the second game of the season but saved Brennan Johnson’s late spot kick to secure a 1-0 win.

The midfielder scored just the hosts’ fourth goal of the season to secure a basement battle win and breathe fresh life into their survival hopes.

Despite the contentious nature of the winner, Wolves deserved the points and Max Kilman hit the post in the first half.

Forest, who remain bottom of the Premier League, were left fuming but can have few complaints after a insipid performance which any leveller would have masked.

With their third week without a replacement for Bruno Lage on the horizon, Wolves caretaker boss Steve Davis had underlined the need for improvement and they tried to force this issue without, again, end product.

Rayan Ait Nouri nodded over an Adama Traore centre before the Spain forward slashed wide in the opening 20 minutes but there was little serious threat.

The lack of goals meant the anxiety levels at Molineux rose earlier than usual and the nerves from the stands were obvious when hosts failed to move the ball or press quick enough.

A creaking Diego Costa was willing but impotent, looking like a 34-year-old who had barely played since January, while Traore continued to be wasteful.

To call both sides underwhelming this season could be seen as a complement and as for Forest, they were neat on the ball but lacked any punch.

Scott McKenna had nodded a Morgan Gibbs-White corner over early and they wanted a penalty when Neco Williams’ shot hit Toti’s arm but there was little to trouble Wolves.

Ait Nouri, often the hosts’ best outlet, drilled wide 10 minutes before the break yet it was Kilman who was inches away from an opener four minutes later.

Daniel Podence’s flick found Traore in space and he stood up a cross for Kilman to glance against the post, with the ball bouncing back into Dean Henderson’s arms.

Wolves could consider themselves unfortunate but they had still failed to manage a shot on target while powderpuff Forest needed to find some steel.

The hosts remained in the ascendancy after the break but finally broke the deadlock after 56 minutes.

Traore cut in from the right and his shot deflected behind after striking Toffolo’s arm. VAR official Lee Mason checked the incident but failed to make up his mind before passing the decision on to Bramall.

He then watched several replays before awarding the penalty – four minutes after the initial incident – which Neves emphatically buried.

Lifted, Wolves tried to find a killer second but needed Sa to be the hero 11 minutes from the end.

Again VAR intervened with Bramall eventually going to the monitor to rule Matheus Nunes had tugged back Ryan Yates.

But Sa, who has been nursing his injury since August, went to his left to save Johnson’s spot kick.