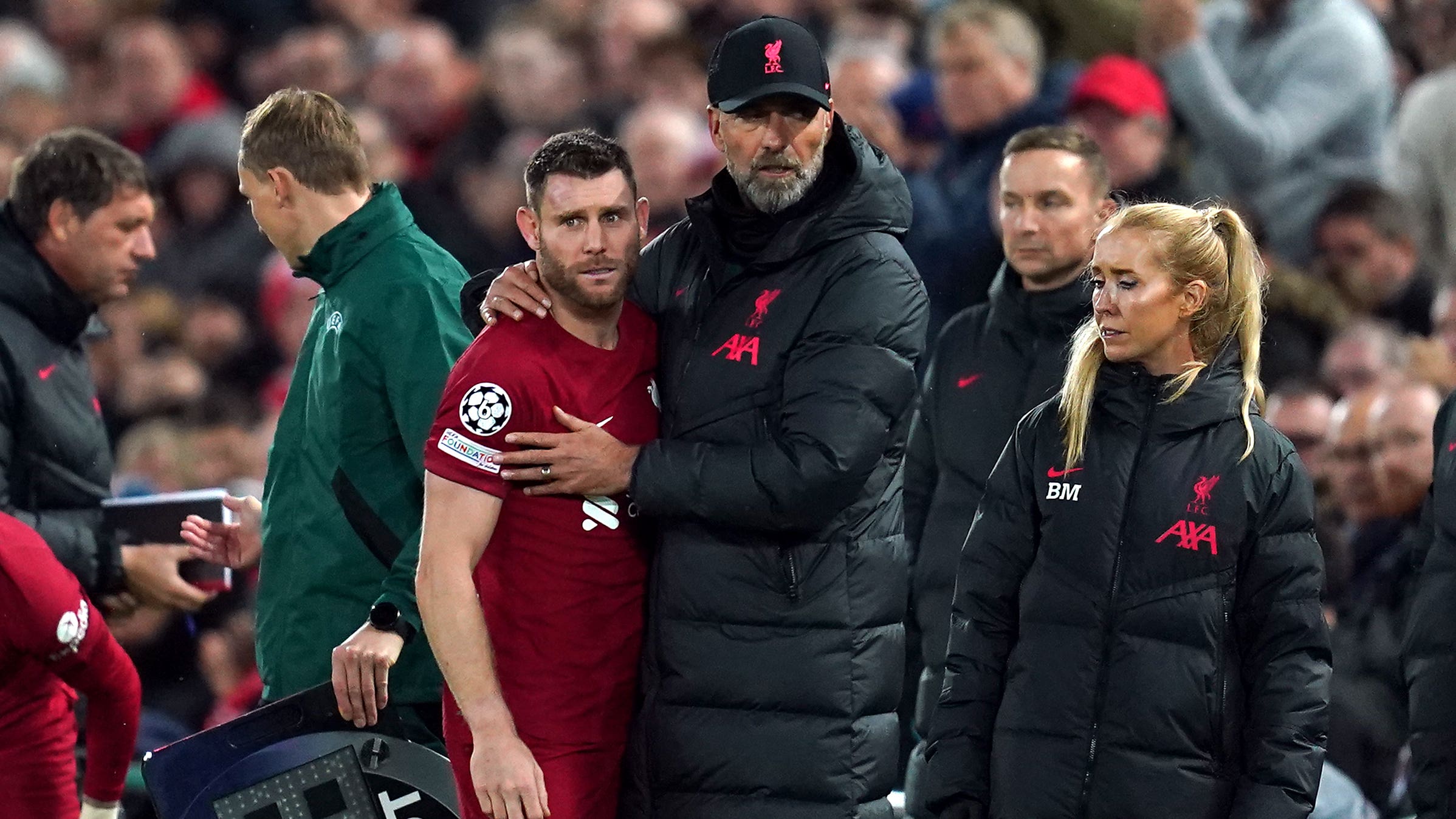 The midfielder is unavailable for Sunday’s trip to Tottenham after being forced off early in the second half following a head injury before the interval.

Klopp said all the necessary checks had been made and it was only when the 36-year-old returned to the pitch after the break that he reported a problem.

“It is difficult. It is not that easy because you need two sources, one is the doctor, one is the patient,” said Klopp.

“For me it was clear; he got a real check on the pitch and he was fine when it happened, in the dressing room in our meeting Millie was completely fine and, after calming down, came out into the floodlights and was like ‘Woah, what is going on here?’.

“He realised and then that is the most important source, the player realised ‘that is not good’ and that is when we stopped and he sat down and we took him off.

“If a doctor feels he is not all right, then he is immediately gone, there is no chance for the player to say ‘No, I am fine’.

“Everybody takes it really seriously. Nobody wants to push a player through with a concussion.

“It is a good joke but we don’t do that nowadays. We really take it seriously, that is definitely the case and it was the first moment we knew and then it was ‘here we stop’.”

Premier League rules allow for an additional permanent concussion substitute to the regular five replacements if a player sustains a head injury but there is currently no provision in European football.

The issue has prompted a debate about how to improve the handling of concussion in a game, with suggestions including having temporary concussion substitutes to allow a player to have a proper assessment.

But as Milner’s situation – and that of Aston Villa goalkeeper Emi Martinez last weekend when he received a blow to the head but continued for some time until reporting a problem – showed, the onset of effects can be delayed significantly and Klopp could not suggest any improvements to the current system.

“In a high performance sport on the pitch surrounded by 30, 40, 50, 60,000 people… I think it is difficult enough to do it in a close environment in a medical practice, to figure it out immediately, as you need a few tests,” added Klopp.

“Everybody takes it seriously. When a player is dizzy he is off the first moment, immediately. Done.

“When the doctor has a feeling he is not right then he is off. It is the quickest we can do. What else shall we do?

“I know you say about temporary subs. I am fine with the concussion sub, take him off and bring on another means you can still change five times after that and the other team has another sub.

“It takes quite a while between getting the concussion and it kicking in, I am not sure 15 minutes is the time to wait for it. People tell you after an hour it kicks in. The way we do it I think is the right way.

“It doesn’t happen that often, to be 100 percent honest. We can talk about it like it happens all the time and the boys are constantly in danger but they are not.

“But if it happens we have a solution for it, much better than ever before in football’s history. Is there space for improvement? Probably. But I don’t know how.”