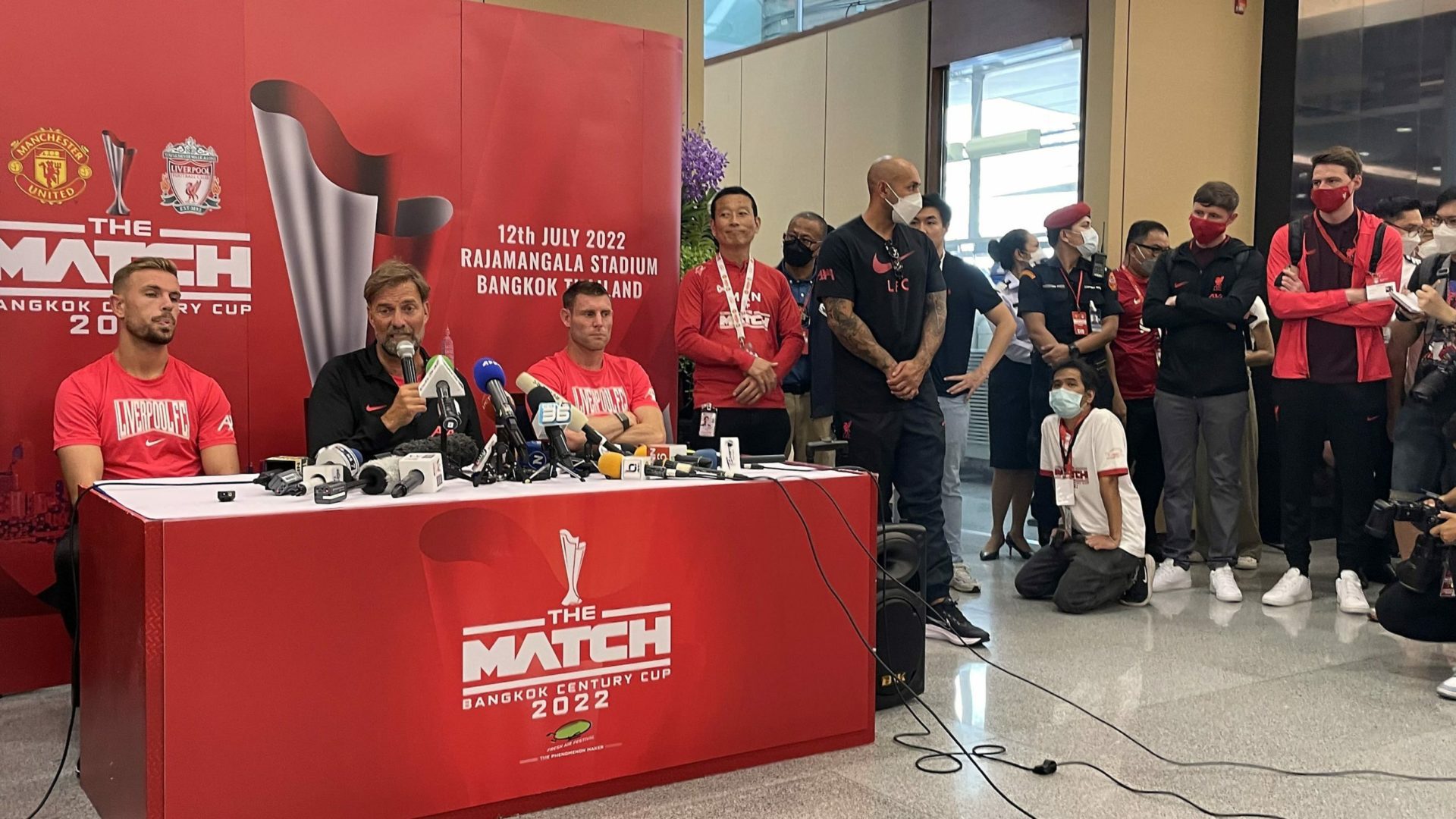 By Press AssociationJuly 10, 2022No Comments

Jurgen Klopp was blown away by Liverpool’s remarkable reception in Bangkok, leading him to jokingly ask whether rivals Manchester United had received a similarly fervent welcome to Thailand ahead of Tuesday’s glamour friendly.

The Reds headed straight from the plane into a wall of excitement in the Thai capital, where the bitter rivals will meet in hot and humid conditions at the cavernous Rajamangala Stadium.

A sell-out crowd is expected for a match that has captured the locals’ imagination, with more than a thousand Liverpool supporters flocking to Suvarnabhumi Airport on Sunday hoping to catch a glimpse of their heroes.

Klopp led the squad in a traditional Thai ceremony in the VIP arrivals area, before throngs of reporters and cameramen crammed into the room, which was hurriedly transformed into a chaotic press conference.

Jordan Henderson and James Milner looked taken aback as they took their seat alongside grinning Klopp, who was presented with a football featuring drawings of him and his players.

“First question I have, did it look like this yesterday when Manchester was here as well?” the German said before smiling and shaking his head.

Those comments were followed by a 10-minute press conference that was more a celebration of Liverpool’s visit to Thailand than a chance to quiz the manager and his players in any detail.

Henderson and Milner spoke briefly about the reception and ever-smiling Klopp took the chaotic set-up in his stride as he spoke about the glamour friendly against United.

“Usually football matches are the most important thing for us but in this specific case it is really more for the people,” the Liverpool boss said.

“We brought here 37 players, so we have all generations here and we have to use all of them because the boys who were on international duty in the summer only arrived today pretty much and they cannot play too long.

“But we will try to give them a few minutes as well, so it will be really exciting.

“Manchester United – a new manager, trained a little bit longer than us so might be, I’m not sure, in a better situation in the moment.

There was only a handful of questions before jet-lagged Klopp, Henderson and Milner were whisked out to the team coaches, where shrill screams followed Liverpool’s every move.

Many fans had been at the airport for more than four hours. Some held home-made banners and pictures, while others clutched shirts with their favourite players on the back.

Some even parked up on the motorway route out of the airport to wave at the coaches, with Virgil van Dijk looking on in amazement from the back of one bus.

There were many more Liverpool fans waiting for the team at their hotel and there will not be any let-up in that excitement heading into Tuesday’s friendly.

Asked about his confidence of winning trophies this season, Klopp said: “As confident as possible. You never know, obviously, but I saw today on the plane a squad full of quality.

“You always need a little bit of luck, how we all know, if you want to win a trophy.

“But to play a good season you need first and foremost consistency, that’s what it’s all about and that’s what we will try. I have no doubt about the quality of the boys.

“The boys will make pressure, which is important. We have five subs from now on in the Premier League as well – we have to get used to that, we have to adapt to that. I’m really looking forward to it.

“There are no guarantees in football but there’s a good chance that we (will) play another good season, I would say.”