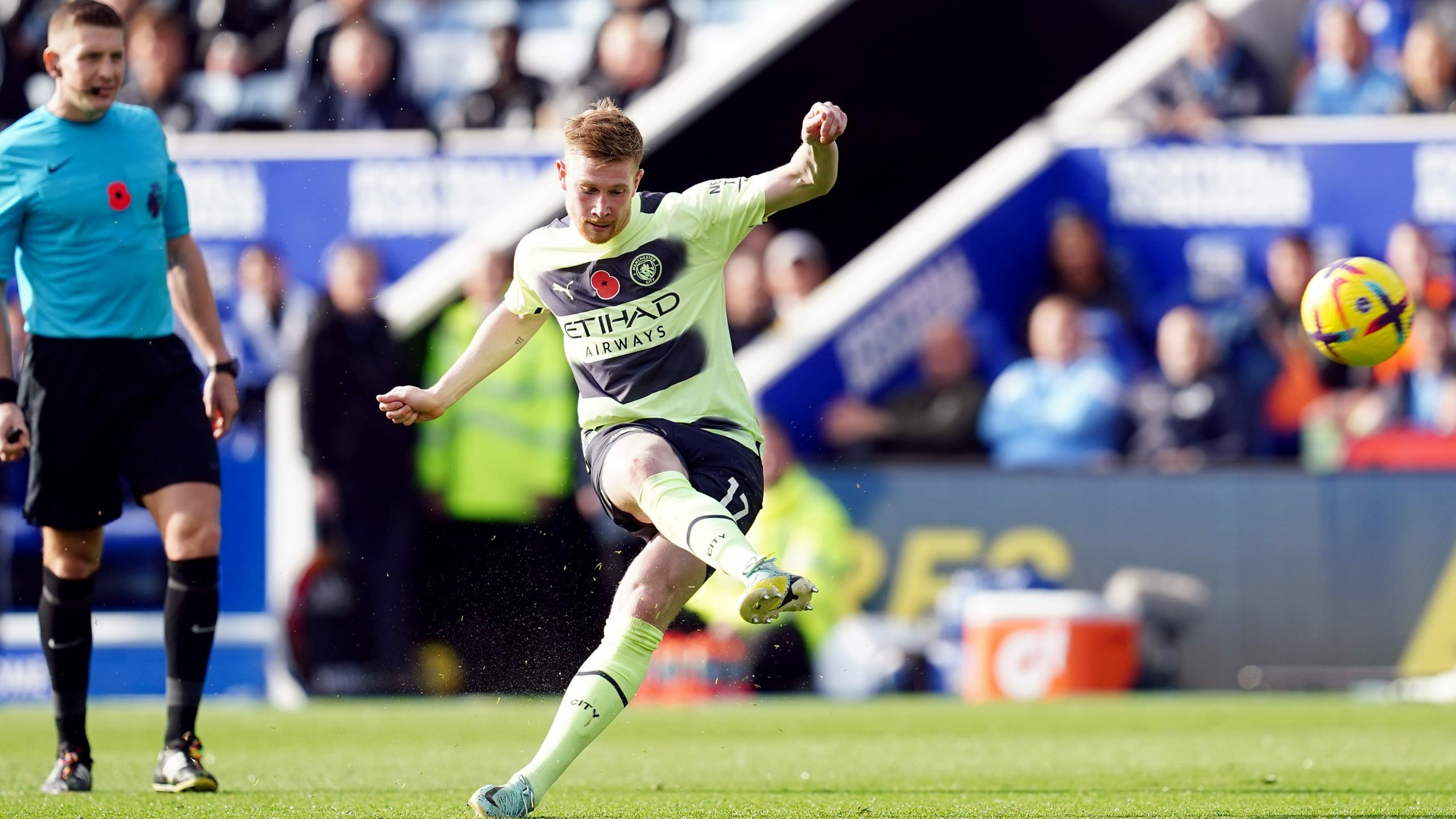 Kevin De Bruyne’s stunner fired Manchester City back to the top of the Premier League after victory at Leicester.

The midfielder’s sensational freekick broke the stubborn Foxes’ resistance as City, without the injured Erling Haaland, grabbed a hard-earned 1-0 win.

Youri Tielemans hit the bar for the hosts, who made City work, but Pep Guardiola’s men moved a point clear of Arsenal, who host Nottingham Forest on Sunday.

Leicester remain 17th but will take confidence from a dogged performance which can still give them the foundations to escape trouble.

Foxes boss Brendan Rodgers wanted 17-goal Haaland to play but will have undoubtedly been happy to see the red-hot forward absent, after failing to recover from a foot injury and virus, although City dominated the first half.

Rodri’s looping header was tipped over by Danny Ward while De Bruyne scuffed wide during an efficient, but relatively quiet, opening from the visitors.

Patient, they bided their time for an opportunity and it eventually arrived after 17 minutes when De Bruyne impressively plucked a ball out the air to tee up Bernardo Silva, who was denied by Ward’s legs.

The Foxes had almost been passed into submission but gave a glimpse of their own threat when Ederson saved smartly from Harvey Barnes’ angled drive after Jamie Vardy broke.

City remained undaunted though, De Bruyne firing at Ward as normal service quickly resumed with the visitors camped inside the Leicester half.

They were so high there was always scope for the Foxes to break but, such was City’s control, they never gave the hosts a glimmer.

To their credit, Rodgers’ side remained focused, keeping their concentration as City continued to probe for the right opening without finding the space they craved.

Caglar Soyuncu, in from the cold for his first league appearance since May, helped patch up a three-man defence while Ward, following four clean sheets in five games, continued to grow in confidence.

It was an impressive effort but the hosts were almost undone 32 seconds after the restart when Rodri guided Bernardo Silva’s ball inches wide.

As it was, City only needed three more minutes to find the breakthrough and, when it came, it was stunning.

Jack Grealish was felled by Nampalys Mendy 25 yards out and De Bruyne stepped up to fire a brilliant freekick into the top corner, via the post.

Leicester looked for a swift response and almost got it when James Maddison’s corner found Tielemans on the edge of the area and the midfielder cracked a perfect first-time volley which Ederson turned onto the bar.

It was a warning for City and, since Pep Guardiola took charge in 2016, no team had scored more top fight goals against them than Leicester, with 17.

The Foxes did mount a late rally as Timothy Castagne turned Maddison’s free kick over and Ederson comfortably claimed efforts from Patson Daka and Kelechi Iheanacho.

City hung on but only after Ruben Dias avoided an embarrassing own goal in injury time when John Stones’ clearance hit the defender and dropped wide.