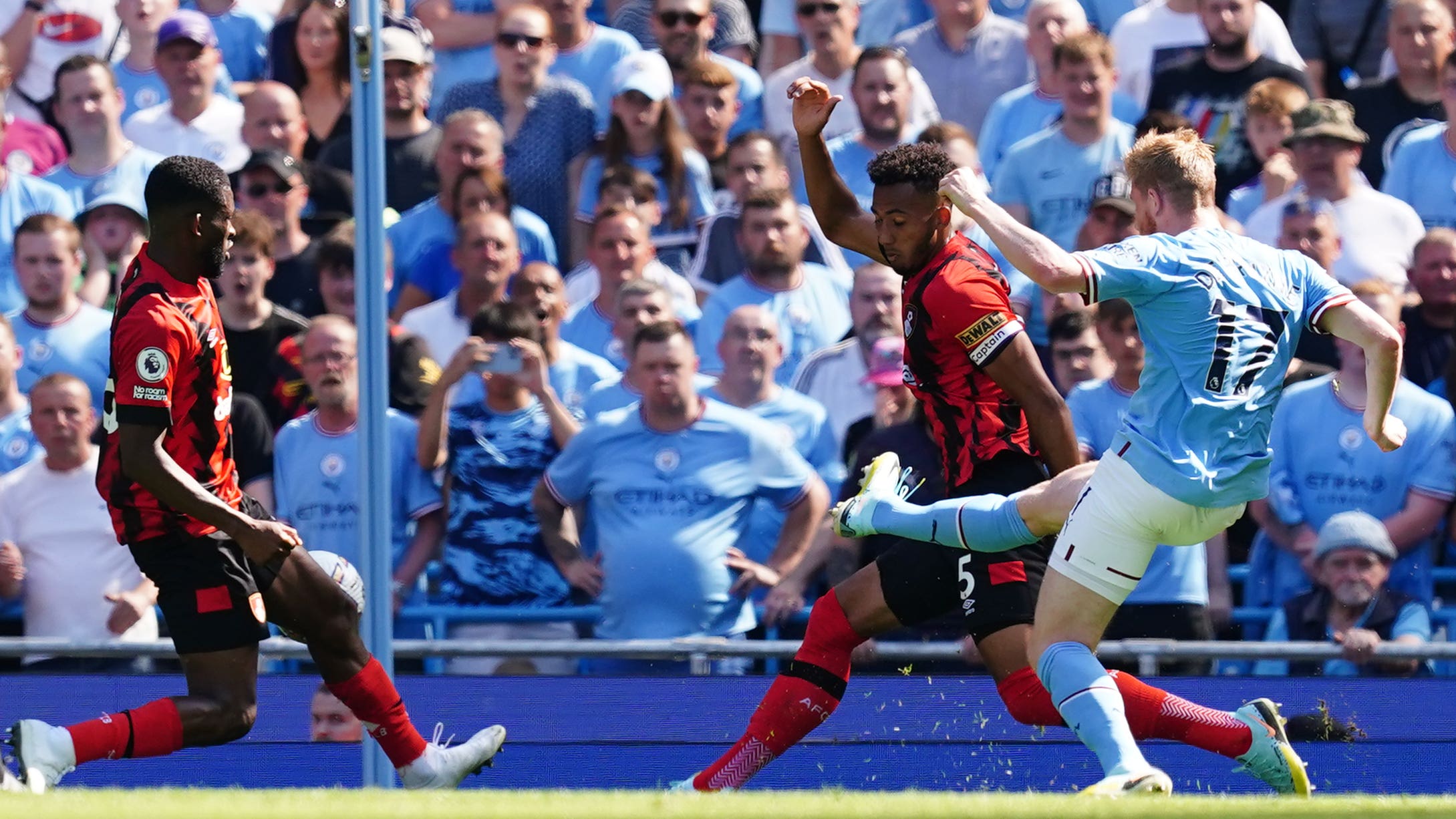 City went ahead with 19 minutes gone when Erling Haaland, who had only five touches in the entire first half on his home debut, slid Ilkay Gundogan in to score, and De Bruyne extended their lead 12 minutes later with a stunning finish.

The Belgium international turned provider eight minutes before the break when he played in Phil Foden to all but put the game beyond the Cherries.

City eased through the second half, during which Jefferson Lerma’s 79th-minute own goal extended their lead as they cruised to victory.

Former City frontman Gabriel Jesus endeared himself to Arsenal’s fans with a double in a 4-2 win over Leicester.

Summer signing Jesus needed just 23 minutes to mark his home debut with a goal when he curled a shot over goalkeeper Danny Ward, and he doubled his tally nine minutes before the break when he headed home after Jamie Vardy could only help on Gabriel Martinelli’s corner.

Ward denied the Brazilian a hat-trick seconds later, but the Foxes’ fortunes failed to improve with half-time fast approaching when referee Darren England awarded a penalty for Aaron Ramsdale’s challenge on Vardy, only to change his mind after being advised to review his decision.

William Saliba’s 53rd-minute own goal briefly gave Leicester hope, but Granit Xhaka restored the Gunners’ advantage within two minutes when Ward collided with team-mate Wesley Fofana as he attempted to collect a cross and dropped the ball at the midfielder’s feet.

James Maddison’s drilled 74th-minute strike again brought City back into it, but Martinelli made it 4-2 within seconds.

Kyle Walker-Peters snatched a point for Southampton as they came from behind to draw 2-2 with Leeds.

The visitors got their noses in front a minute into the second half when Rodrigo tapped home Jack Harrison’s cross, and he made it 2-0 on the hour when he stabbed Pascal Struijk’s header across the line.

Saints’ substitute Joe Aribo reduced the deficit within three minutes of his introduction and Walker-Peters levelled with nine minutes remaining.

Buendia’s strike five minutes from time handed Villa a 2-0 lead over Everton after Danny Ings had opened the scoring and, although the visitors pulled one back courtesy of Lucas Digne’s own goal, a late blitz failed to yield an equaliser.

Aleksandar Mitrovic passed up a golden opportunity to fire promoted Fulham to victory at Wolves when he saw his second-half penalty saved by Jose Sa.

Mitrovic, who was later involved in an angry bust-up with Morgan Gibbs-White, was handed his chance with nine minutes remaining after Bobby Decordova-Reid had been brought down by Rayan Ait-Nouri, but Sa saved the Serbia international’s spot-kick with his legs to earn his side a 0-0 draw.

The German miskicked in his attempt to convert Kaoru Mitoma’s 85th-minute cross to let the Magpies off the hook.