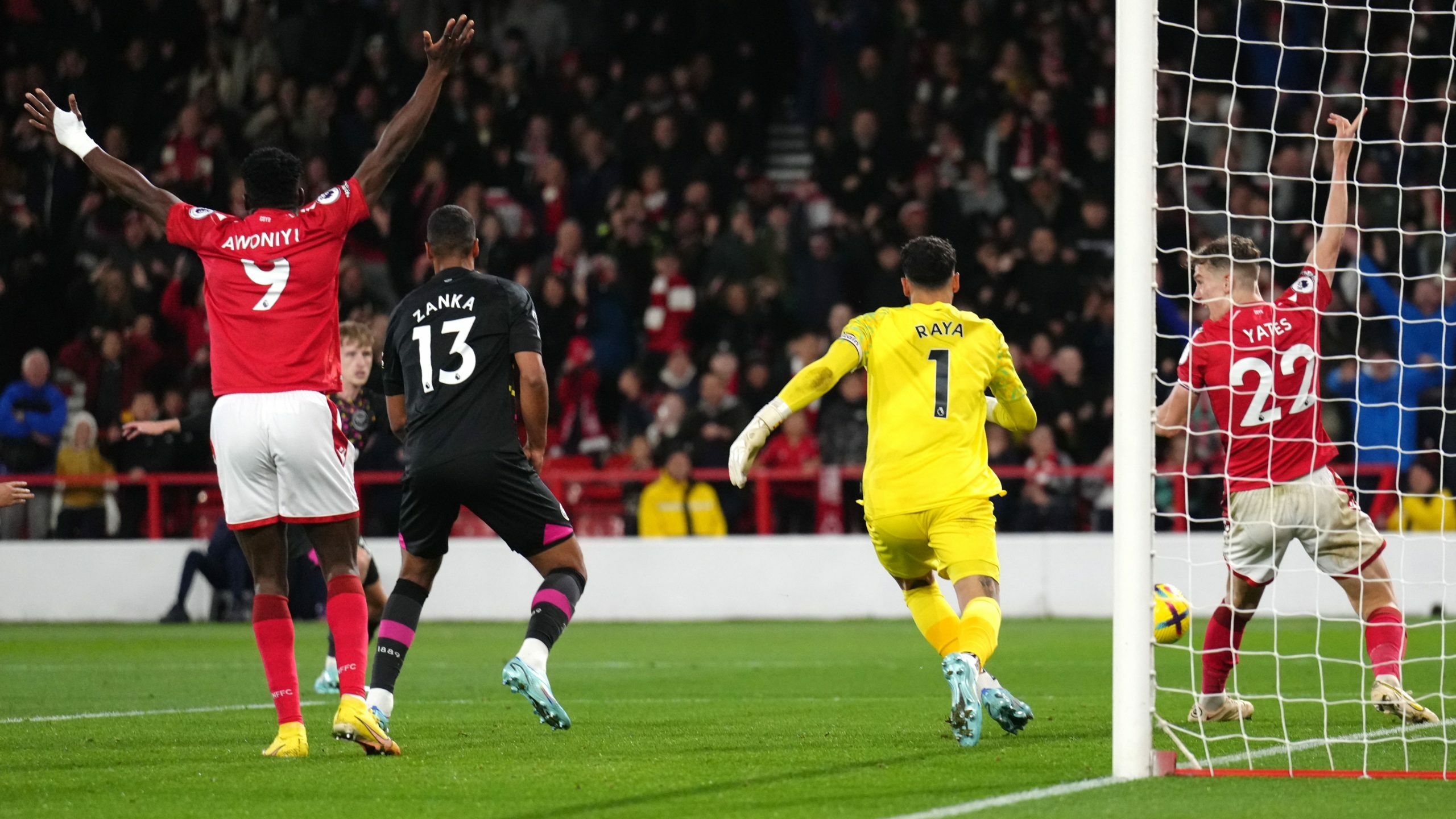 A stoppage-time own goal from Mathias Jorgensen allowed Nottingham Forest to steal a 2-2 draw with Brentford in a game with yet more VAR controversy.

Jorgensen saw a clearance deflected off him and go over the line in the sixth minute of time added on to earn Forest a deserved point.

The hosts looked like going home empty-handed as goals from Bryan Mbuemo and Yoane Wissa put the Bees on course for a first away win of the season after Morgan Gibbs-White had put Forest ahead.

But Mbuemo’s goal on the stroke of half-time was full of controversy as it came from the penalty spot after referee Andre Marriner eventually ruled Dean Henderson fouled Wissa after checking it on the pitchside monitor, even though he did not give it live and the goalkeeper appeared to have played the ball.

Forest’s sense of injustice, with two credible penalty shouts ignored by VAR, was heightened when Wissa scored with 14 minutes remaining but there was one moment of drama left with Jorgensen’s own goal awarded by goalline technology.

This may yet prove to be an important point for Forest in their battle for safety as although they remain bottom, they are only two points adrift of safety with another home game before the World Cup break.

The Bees, meanwhile, will be nervously looking over their shoulder as they are now without a win in four.

It had all started so well for Forest and it was only down to David Raya that they were not ahead as the Premier League’s most worked keeper was kept busy.

No other stopper in the division has had to make more saves than the Spaniard and he was twice forced into good saves from Brennan Johnson, who was played in by Gibbs-White on both occasions, while also fielding a Neco Williams effort from distance.

Forest were relentless and were rewarded with a deserved lead in the 20th minute.

Emmanuel Dennis nipped in from behind to steal possession, passed to Gibbs-White and the record signing weaved past three defenders before finding the bottom corner with the aid of a deflection.

The hosts were full value for their lead and went for a second and were unlucky not to get a penalty after Ryan Yates was appeared to be pushed over by Josh Dasilva but neither Marriner nor VAR thought it was a foul.

Gibbs-White was Forest’s biggest threat and could have doubled the tally but he shot straight at Raya when well placed in the area.

Brentford had been non-existent as an attacking threat but went in at half-time level after some VAR controversy in added time.

A misplaced pass by Forest saw Wissa played through and as he rounded Henderson he tumbled over and could not get a shot on goal.

Marriner did not think it was a foul live and only after a lengthy dissection by VAR official Lee Mason was he invited to look at the pitchside monitor, where he opted to change his decision and give a foul.

That goal changed the complexion of the game and Brentford played the game on their terms at the start of the second half, keeping the ball well and Forest had lost their momentum.

The visitors went ahead with a 76th-minute goal as Mathias Jensen played in Wissa, who raced clear and lobbed Henderson.

But Forest did not give up and earned a point with the last meaningful kick of the game as Gibbs-White’s shot was cleared off the line but it hit Jorgensen and went in.