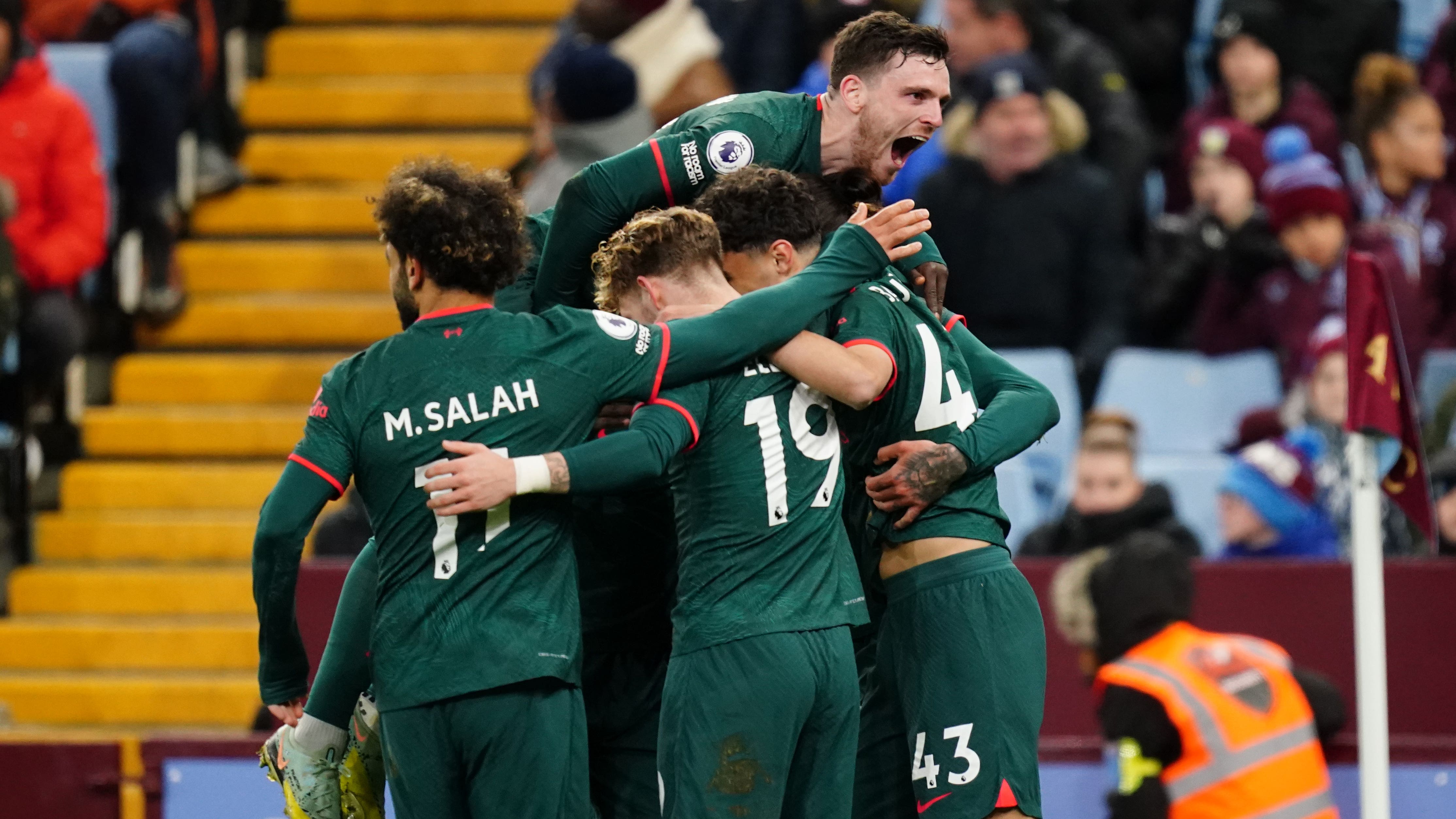 Mohamed Salah and Virgil van Dijk struck in the first half before Stefan Bajcetic’s first senior goal made it 3-1.

Victory moved them five points adrift of the Champions League spots, remaining sixth, ahead of Friday’s visit of Leicester.

Yet they rode their luck against mid-table Villa, who put up a fight but missed chances and lacked the quality when it mattered most despite Ollie Watkins’ strike.

Jurgen Klopp had seen second-placed Newcastle move 11 points clear with a stroll at Leicester so knew victory was imperative not just to keep in touch with the Magpies but reel in the top four.

It looked like it may be a difficult night when Emi Buendia teed up Watkins inside the opening 60 seconds but he lacked the power to beat Alisson Becker.

It was a miss which summed up Villa’s attacking threat – all promise and no quality – and one they would quickly rue.

If the stoppage unsettled Villa, it failed to deter the visitors who took the lead once play resumed on five minutes.

Robertson’s corner was only cleared to Trent Alexander-Arnold 40 yards out, he bent a brilliant pass to Robertson who nipped in ahead of John McGinn and rolled a perfect ball for Salah who could not miss.

Yet there was still encouragement for Villa with Watkins again escaping the defence to be denied by Alisson before the offside flag was correctly, but belatedly, raised.

Liverpool hardly looked secure at the back and Leon Bailey miscued from 12 yards as Villa Park’s usual frustration raised its head early. More consternation followed when Watkins’ tame header was easy for Alisson.

The difference was Liverpool’s ruthless quality and they almost had a second after 21 minutes when Joel Matip headed in Alexander-Arnold’s free-kick, only to have strayed fractionally offside.

There was space to exploit at both ends and Nunez twice underlined the point by heading over before seizing on Ezri Konsa’s slice by firing straight at Olsen.

But, from the resulting corner, the hosts failed to clear and Salah teed up Van Dijk to rifle in, via a small deflection off Konsa.

Nunez should have added a third before the break, instead steering at Olsen from close range, but a two-goal cushion gave the Reds a perfect second-half platform.

It was one which suddenly looked unstable when Watkins drilled into the corner seconds after the re-start, but was offside, and McGinn fluffed a stooping header.

Liverpool, though, should have killed the game after 50 minutes when Salah broke quickly from a Villa free-kick only for Olsen to deny him.

The Reds needed to calm the game as Villa remained a threat but they failed and Watkins pulled a goal back after 59 minutes, nodding in Douglas Luiz’s cross.

A frantic match moved up a notch with Villa Park reenergised but it was the erratic Nunez the next to miss when, put through by Salah, he dragged woefully wide of the far post with 15 minutes left.

Finally, Liverpool took the sting out of Villa and eventually ended their hopes with nine minutes left when Bajcetic showed impressive composure to round Olsen and squeeze a shot through Mings’ legs after Nunez’s cross.