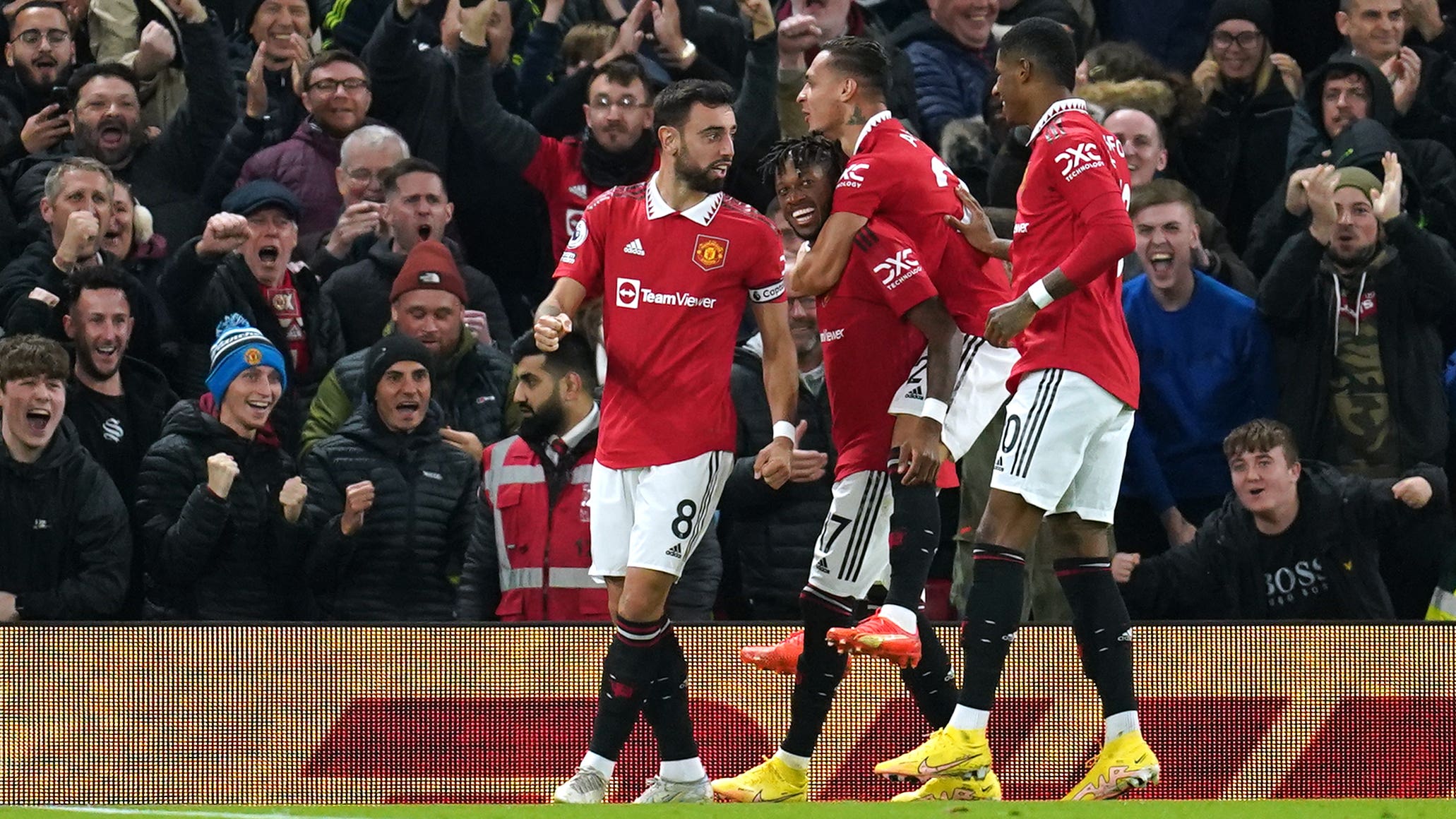 Three days on from the frustrating scoreless home draw with Newcastle, the Red Devils produced an exceptional display to see off Champions League qualification rivals at a rocking Old Trafford.

Antonio Conte’s Spurs were on the backfoot from the outset and United ran out 2-0 victors as impressive Fred’s deflected strike was followed up by an excellent curling effort from captain Fernandes.

This was the best performance of summer appointment Ten Hag’s reign and began with Antony hitting the outside of the post, before Tottenham captain Hugo Lloris produced a string of key saves.

The hosts continued to play with confidence and put the game to bed in the 69th minute, when Fernandes coolly guided a curling effort past Lloris on a night when abject Spurs were fortunate not to lose by more.

Both sides made a change apiece for Wednesday’s match as Yves Bissouma replaced injured Spurs forward Richarlison and Marcus Rashford came in for Cristiano Ronaldo.

Conte shared a warm embrace with former Tottenham midfielder Christian Eriksen – who he coached at Inter Milan – as the teams made their way out for kick-off, with Rodrigo Bentancur having the first shot of the evening.

But it proved a false dawn for Spurs as they spent the opening period hanging on for dear life.

Lloris played a key role in keeping the hosts at bay but was breathing a sigh of relief early on, with his first save his most unconvincing of the night as he just about stopped Antony catching him out of position.

The 35-year-old pushed over a Fred drive from the resulting corner and Antony soon went close with a curling effort from the edge of the box, clipping the outside of the post after being allowed to cut onto his left foot.

Matt Doherty curled wide on a rare voyage forward by Spurs, who were being pinned back and were thankful to Lloris for producing a big save when Fred smartly slipped Rashford behind.

The France international produced another important stop to prevent a 25-yard Fernandes free-kick finding the top left-hand corner, then tipped over a fizzing Luke Shaw volley as the one-way traffic continued.

Conte and Bentancur had a heated exchange on the touchline towards the conclusion of a half that ended with Harry Kane having Spurs’ first shot on target just before the break.

The match was scoreless at half-time, but United’s breakthrough came just after the restart.

Jadon Sancho laid back for Fred to get away a shot that hit Spurs defender Davies and wrongfooted Lloris in front of the elated Stretford End.

Rashford raised the volume soon after, showing excellent skill and poise when marshalled by two Spurs defenders to make space and force Lloris into a save.

Kane’s effort wide at the other end was a shot across the bows, as the England skipper’s attempt from an acute angle that David De Gea saved unaware the offside flag would be raised.

United broke after that chance as referee Simon Hooper let the play continue and extended their advantage.

The ball was bouncing around and Fernandes kept his cool when Fred saw an effort blocked, steering a curling effort past Lloris from just inside the box.

The Spurs goalkeeper saved a daisy-cutter from Fernandes and produced a strong one-handed stop to thwart Rashford as United continued in the ascendancy.

Fernandes thought he had scored a beautiful second in the 81st minute. The Portuguese sat Lloris down and skipped beyond him to slot into an empty net, only to see the flag raised for offside.

It would have been the cherry on the cake for United, who were unable to celebrate with Ronaldo at the final whistle.

The unused substitute made his way down the tunnel before the clock struck 90, potentially producing an unnecessary sideshow at the end of a superb night for his team.