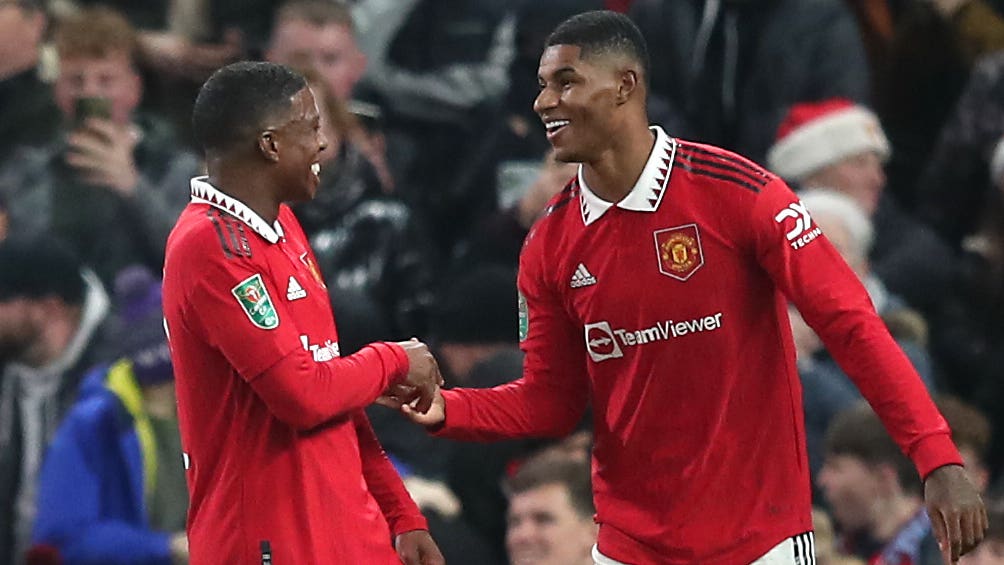 Marcus Rashford continued his rich vein of form as Manchester United closed in on the Premier League top four with a 3-0 win over Nottingham Forest.

Rashford, fresh from an impressive World Cup campaign with England, scored the opener and made the second for Anthony Martial as United moved to within one point of fourth-placed Tottenham.

He was off the pitch by the time that Fred added late gloss to the victory that Rashford spearheaded.

The 25-year-old has been back to his best this season and scored his eighth goal in 13 games for club and country, looking a real threat throughout the match.

The way he combined with Martial and Antony in attack suggests that United will fare just fine without the departed Cristiano Ronaldo.

And with the possibility of additions next month, Erik ten Hag’s side will be making a real push to break into those Champions League places and stay in them through the second half of the season.

For Forest, who had a goal ruled out by VAR, this match went a little better than the last time they played United when they lost 8-1 in 1998, but they remain in the bottom three and with Chelsea to come on New Year’s Day it does not get any easier.

Having conceded six at Manchester City and five at Arsenal, Steve Cooper’s side will have arrived at Old Trafford with a sense of trepidation about what was to come.

They had a taste of what might be in store as early as the fourth minute as Wayne Hennessey – making his first Premier League start since January – turned a Tyrell Malacia shot onto a post.

The next 15 minutes were actually of promise for Forest as they probed United without the prospect of creating anything and then it all fell apart inside the space of four minutes.

The hosts took the lead in the 19th minute with a goal straight off the training ground as Rashford darted to the front post to meet Christian Eriksen’s low corner and swept into the far corner to draw level with Eric Cantona on 64 Premier League goals for United.

A mere 185 seconds later it was 2-0 as United produced a scintillating counter-attack with Rashford this time the provider, breaking at pace and then squaring for Martial, whose low shot squirmed through the hands of Hennessey, who will not be too keen to see any replays.

Unfortunately for Forest, VAR official Robert Madley watched plenty of replays of the goal Forest thought they had scored five minutes before the break.

Renan Lodi whipped in an inviting cross that Ryan Yates appeared to head into the far corner.

However, Madley first checked for a handball on Yates as his arm was outstretched and then when it became apparent that the ball deflected off Willy Boly on the way in, he ruled the defender was in an offside position and Forest were denied a first away goal since August.

Forest needed a goal early in the second half and they briefly threatened, but it was United that continued to create the meaningful chances.

Rashford was at the heart of another lightning break, feeding Bruno Fernandes, who teed up Antony, but Hennessey made a good save.

The goalkeeper, playing his first game since being sent off for Wales at the World Cup, was being kept busy and went some way to atoning for that first-half error making a string of stops to keep it at two.

He denied Rashford with his feet, kept out Martial with a smart stop and then tipped over from Casemiro’s chipped effort.

It looked like Ten Hag’s men would have to settle for two, but Fred killed the game in the final five minutes, coolly converting after Casemiro’s clever pass.