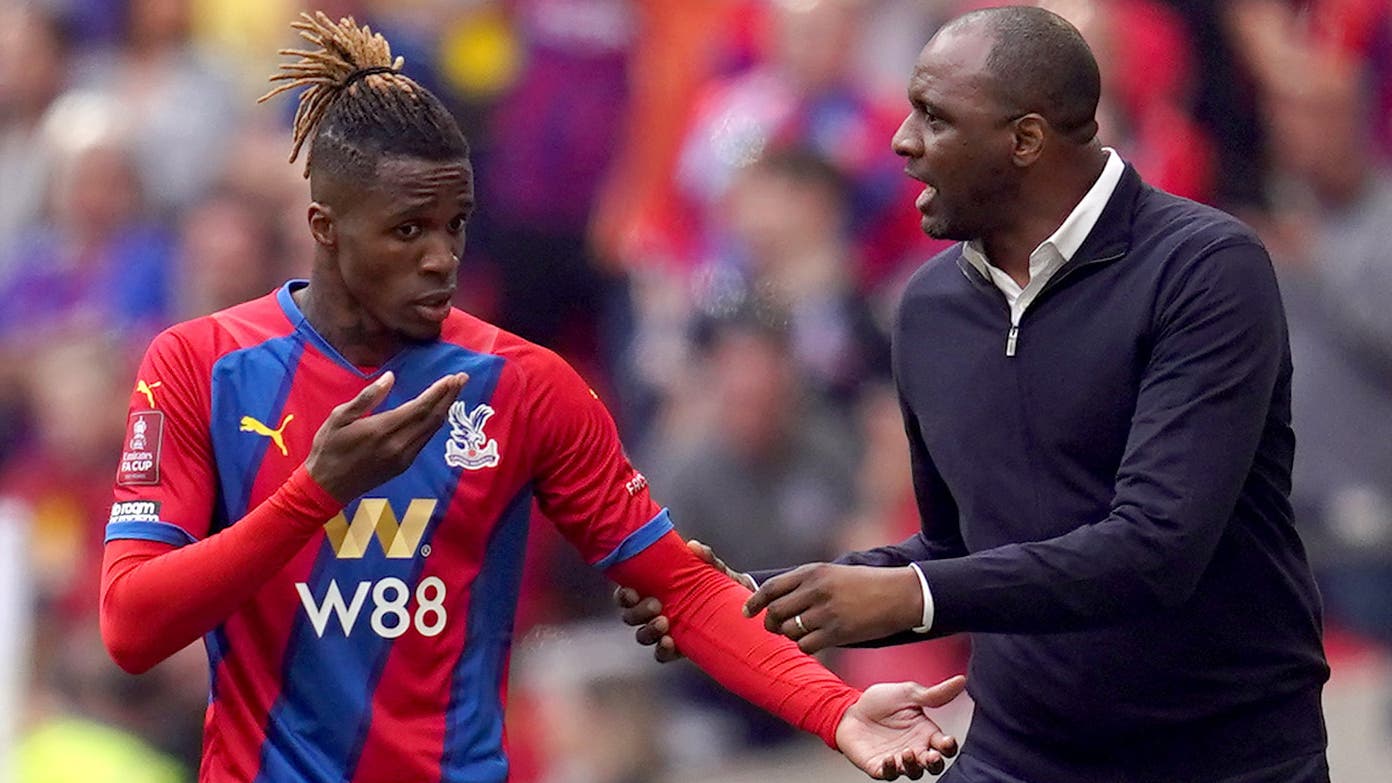 Crystal Palace boss Patrick Vieira hopes Wilfried Zaha will continue to feel the love at Selhurst Park for a while yet as the club look to match his ambitions.

Zaha scored his fifth goal of the campaign as the Eagles came from behind to beat strugglers Wolves on Tuesday night.

Afterwards Zaha, 29, talked of how much he is enjoying playing alongside talented youngsters like Ebere Eze and Michael Olise.

The Ivory Coast international’s five-year contract with Palace comes to an end next summer, but both parties appear relaxed about what the future will hold.

Palace have been given the go-ahead by Croydon Borough Council to build a new main stand to boost Selhurst Park’s capacity to more than 34,000.

It is all part of the club’s long-term development plans, which follows on from major investments at the training ground and Academy.

Vieira knows the importance of both keeping Zaha at the centre of his squad – but also showing the club continue to strive forwards, on and off the pitch.

“There is always speculation on all good players who are at the end of the contract,” Vieira said.

“The only things that we can do is to show him the love that we have for him – and the way he has been playing, I think he is sending back the love as well, so there is no trouble, there is no losing energy on that situation.

“We know how important he is for us and I think he understands that he is a big player in this football club and we expect a lot from him.

“Wilfried loves to have those kinds of pressures on his shoulders, so we will see what will happen but of course we will do everything to keep him in our football club.”

Vieira told a press conference: “I don’t have any doubt about him wanting him to stay, but at the same time as a football club we have to show to him how ambitious we.

“When you are looking at the talent that we have on the field with those young players around him, that shows as well as the ambition of the football club.

“He loves the way we play because that has allowed him to to score goals, to show how good he is and he is taking responsibility as well.

“That responsibility takes the best of him, and he understands that he has an important role to play on and off the field as a positive example. He has always been a leader.

“We have so many young players around him who came up from the Championship and they need to understand what is the Premier League is about and how they need to keep working every week to keep developing themselves.

“When you look at him, what he has been doing in the Premier League the last couple of years, I think the young players are in really good hands.”

Palace head to Everton on Saturday with Frank Lampard’s side having lost three successive league matches, after the 1-0 reverse at Newcastle on Wednesday night.

“We know how difficult it is to go there,” the Palace boss said. “There is pressure, there is an atmosphere and we have to be prepared.

“We have to be ready, ready to compete and perform the best that we can.”