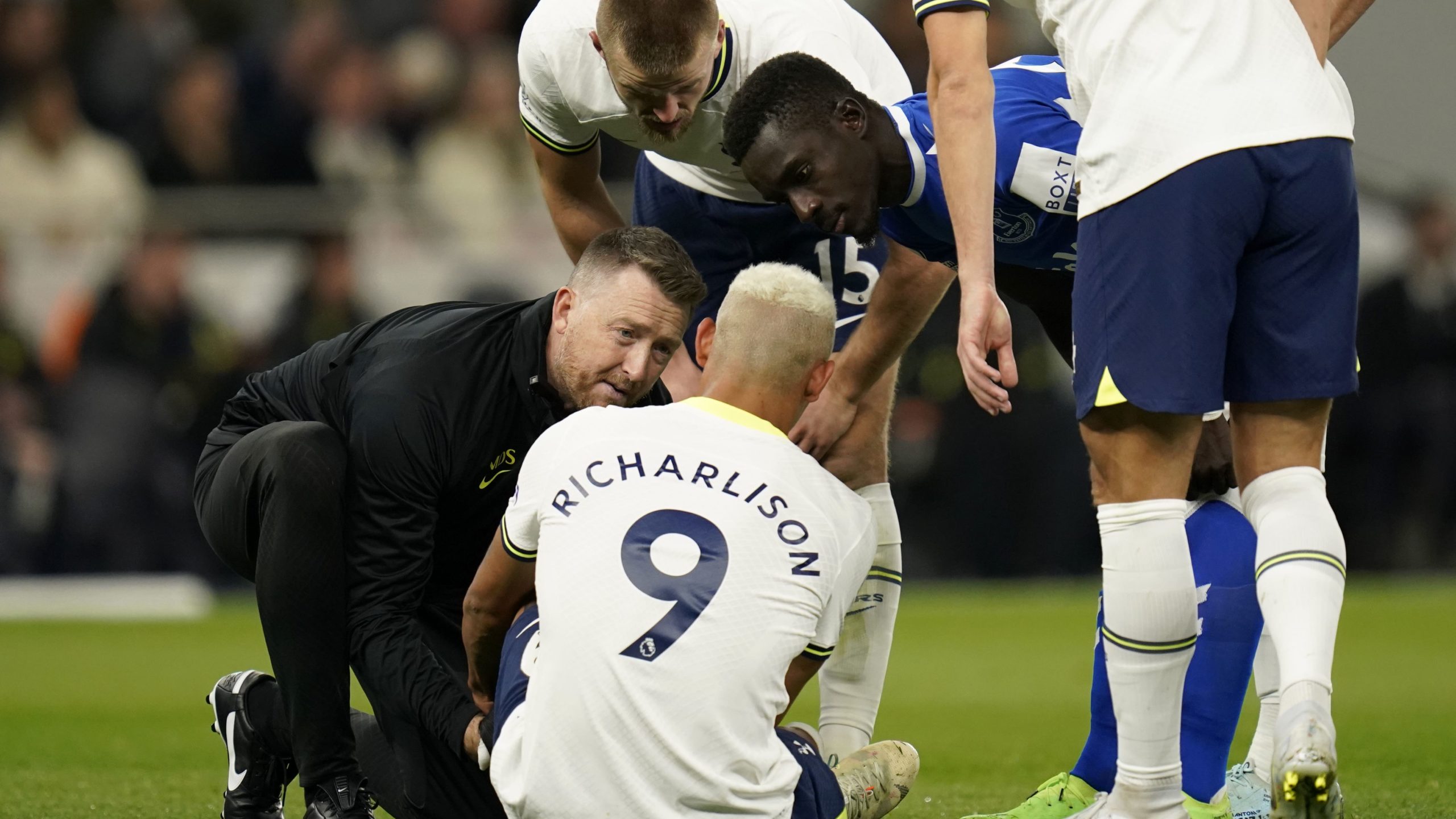 Tottenham boss Antonio Conte admits the team’s growing list of injuries is a genuine concern ahead of a packed stretch of matches.

Spurs sealed their 10th consecutive home victory with a 2-0 win over Everton thanks to second-half goals from Harry Kane and Pierre-Emile Hojbjerg.

But it was not all good news for Conte, who was forced to substitute Richarlison in the 52nd minute, the striker later appearing in the mixed zone on crutches and fighting back tears.

“For sure against Manchester United he’s out,” said the Spurs boss, looking ahead to his side’s trip to Old Trafford on Wednesday.

“He felt something in his calf and he won’t be available for the game against United and I don’t know but I think he needs a bit of time to recover.

“It’s a pity because we are talking about a player that gives us a lot of quality, but at the same time also he is strong and improves our intensity.”

And with Dejan Kulusevski (hamstring) also ruled out of the Everton clash and doubtful for United after undergoing another MRI on Friday, Conte was feeling the pressure of a rapidly shrinking bench.

He said: “The problem that Kulusevski has, I think also he needs time to recover and fingers crossed for the next games, because we have to play many, many games in a short period.

“And if you have the squad penalised with injuries it becomes a bit difficult, but today we showed that we are ready to overcome every difficulty.”

There were chances for both sides in a first half that saw Spurs nod a few early attempts over the crossbar before staging a late surge which Everton did well to fend off.

The Toffees had a chance to break the deadlock after Amadou Onana pounced on a loose ball and drove into the area, but the midfielder skied his effort to send the sides goalless into the break.

Jordan Pickford made a brilliant stop to deny Kane’s half-volley in the 58th minute but soon found himself at the centre of the visitors’ undoing.

The Everton keeper blocked Matt Doherty’s effort from the back post but could not hang on and collided with Kane as the England captain tried to recover the rebound.

Kane took full advantage of the resulting penalty and broke the deadlock in the 59th minute of his 400th appearance for Tottenham before Hojbjerg put the game away with four minutes left in normal time.

Everton boss Frank Lampard was quick to defend his keeper despite the costly second-half error.

He said: “Of course every goal you concede is disappointing. Jordan is an amazing goalkeeper for us so the circumstance is what it is and the second one really we’re pushing to try and get back into the game to some extent.

“We were very competitive in the game, in the way we played, and on another day we take our chances I think it looks different.”

Lampard admitted it was always going to be a tough test to face an on-form Spurs side, who were third in the Premier League table after Saturday’s victory and leapt to the top of their Champions League group on Wednesday with a 3-2 win over Eintracht Frankfurt.

“The reality is you can come to Tottenham and lose,” he said. “It’s a Champions League team, a really strong team.

“What is important is that with training, with consistency and momentum, we pick up points now going forward in games that we should be stronger in and show we’re a stronger team.”