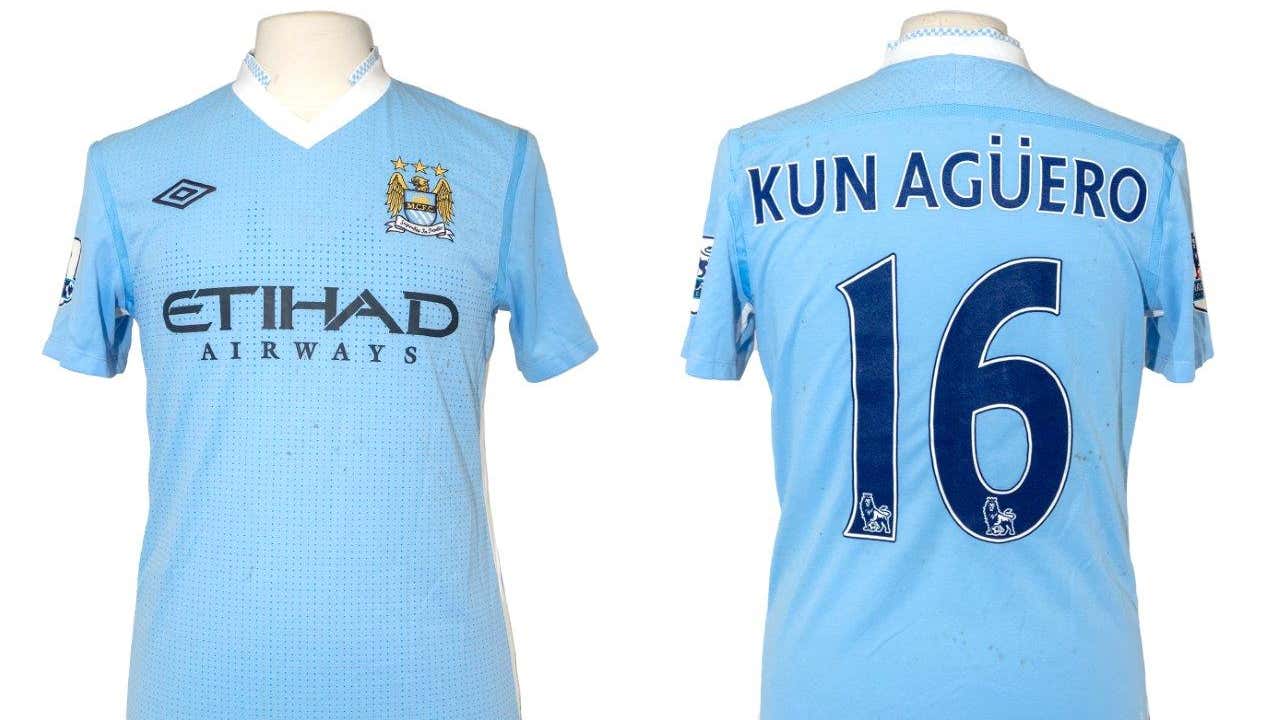 The shirt worn by Sergio Aguero as he scored Manchester City’s famous title-winning goal against QPR 10 years ago is going under the hammer.

The unwashed and champagne-stained number 16 jersey, which bears the name ‘Kun Aguero’ – his childhood nickname – is expected to fetch at least £20,000.

Aguero sent the Etihad Stadium into raptures in the final moments of the last day of the season on May 13, 2012 after finding the corner of the net with a low drive, before pulling off the shirt and victoriously whirling it around.

The result of the championship had been resting on a knife-edge, with results in other games meaning United had been poised to win the title before Aguero struck.

It was Manchester City’s first league title since 1968, ending a 44-year wait, and prompted broadcaster Martin Tyler’s famous “Aguerooo!” commentary line, with the stunning finale widely considered one of the Premier League’s most memorable moments.

The player retired from football in December 2021, having been diagnosed with a heart condition, but his scoring record shows the impact he had – netting 184 goals for Manchester City in 275 games, in a club stint just shy of 10 years before heading to Barcelona.

And there can be little doubt which strike was the most crucial.

Speaking just hours after netting the winner against QPR, Aguero said: “In my career so far it’s the most important goal.

“You score the goal in the last minute to win the title. You’re not sure if that’s ever going to happen in your career again.”

The shirt is due to go for auction at Hansons Auctioneers in Etwall, Derbyshire, on November 3.

David Wilson-Turner, Hansons’ head of sports memorabilia, said: “It was arguably the most important goal in the club’s history.

“Former Manchester City player Mario Balotelli asked Aguero for the shirt as a souvenir but left it behind with his bag.

“It was obtained by a former Manchester City kitman, who donated it the National Football Shirt Collection which loans sporting memorabilia to museums.”

Collection owner Neville Evans, from Wales, added: “After Balotelli left the stadium without his bag – and the shirt – the items were transferred to the club’s training ground. However, they were never claimed.

“After some time had passed, the former City staff member who found the shirt gifted it to the National Football Shirt Collection via my curator.

“I never planned to sell it but my curator is currently undergoing medical treatment.

“The auction proceeds will be shared between him and two charities important to him, Testicular Cancer UK and the Stroke Association.”

Charles Hanson, owner of Hansons, said: “I am delighted to be involved in a bid to help these important charities.

“Coincidentally, the year Aguero scored that goal – wearing that shirt – I was diagnosed with testicular cancer.

“Some football fans may recall the Aguero shirt being offered for sale earlier this year. Bids were pouring in, but due to unforeseen circumstances it had to be withdrawn.

“Now there is nothing to stop any keen collector making it their own.”