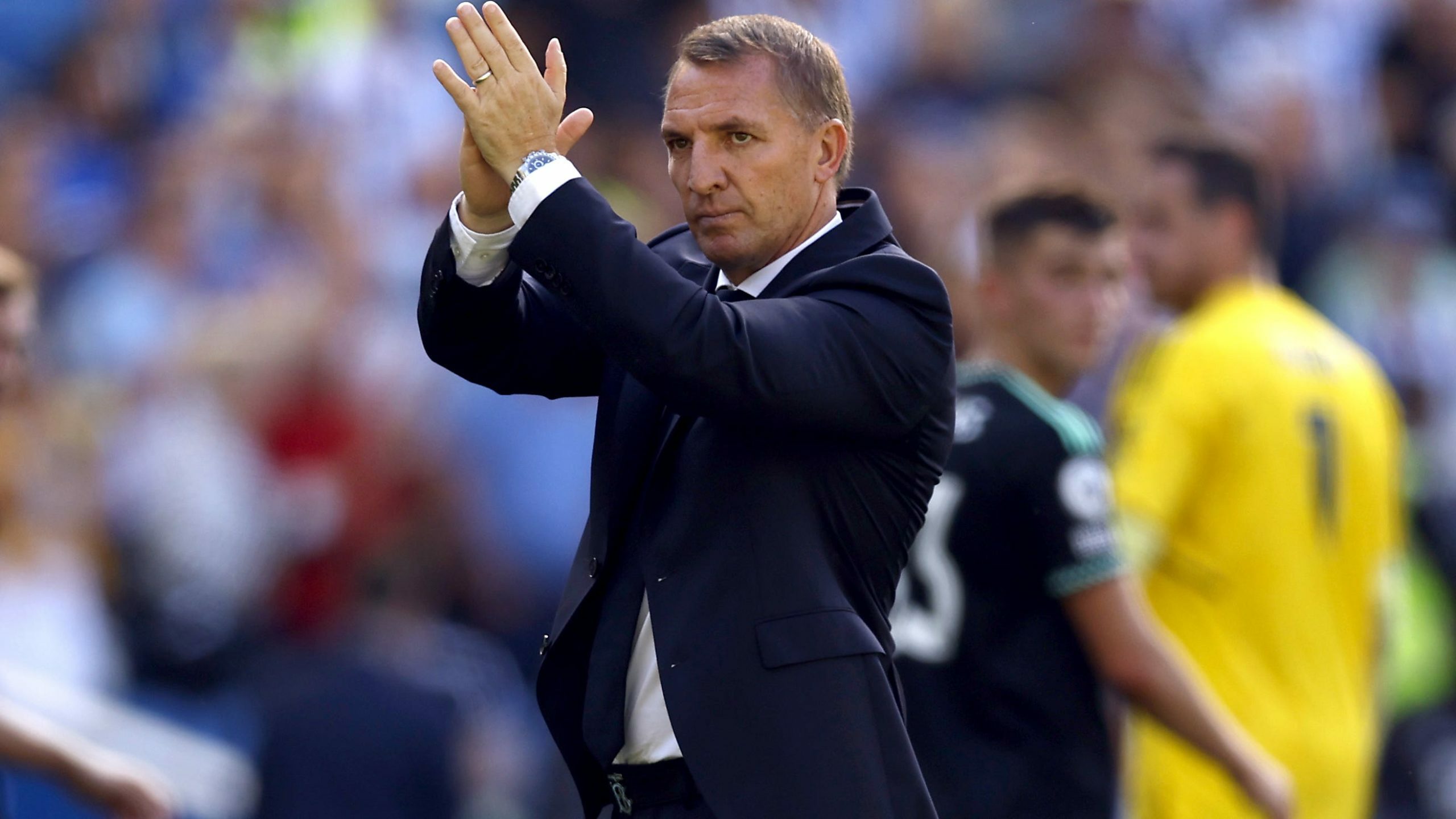 Beleaguered Leicester boss Brendan Rodgers is adamant his underperforming players are “very much together” and “giving everything” despite the club’s worst start to a Premier League season.

The struggling Foxes remain bottom of the table with just a single point after Sunday’s 5-2 hammering at Brighton condemned them to a a fifth consecutive top-flight defeat.

Sections of City’s travelling support turned on their under-pressure manager at the Amex Stadium, unfurling a ‘Rodgers Out’ banner at full-time and chanting for him to be sacked.

“I’m happy when that happens because they’ve got to tell each other,” Rodgers said of the disagreements. “You can’t hide behind a rock and pretend it’s not happening.

“The group is very much together, that’s the beauty of it. The spirit’s there, a great bunch of guys that have talent but, at the minute, collectively we’re not quite showing that talent and that’s (due to) confidence.

“We’re very much together, there’s no doubt about that. But the telling things to each other on the pitch, I like that.

“The players are giving everything and fighting.”

After coming 12th the season after their shock 2016 title success, Leicester have registered five successive top-half finishes in the Premier League.

But, following a frustrating transfer window in which he was unable to significantly add to his selection options, Rodgers has already warned that avoiding relegation is the main aim this term.

The Northern Irishman feels it is “a constant challenge” to plug gaps in his team after likening his squad to a jigsaw with missing pieces.

“We have the players that we have, that have the skill set that they have and we have to try and maximise what we can get out of them,” said Rodgers, who is favourite to be the next Premier League manager to be sacked.

“For us, it’s like a jigsaw, we’ve got pieces missing and it is a constant challenge to try and fill the gaps where the pieces are missing.

“That’s the reality of where we’re at but it won’t stop us trying and fighting and working to get the best results we can.

“Football can change very quickly. We get one result and that will breed a lot of confidence into the players and then we can move on from there.

“It’s my job and the staff’s job to keep them up there, keep them fighting, keep them working.”

Leicester led after just 51 seconds through Kelechi Iheanacho and, following Luke Thomas’ own goal and a strike from Moises Caicedo, were level at the break thanks to Patson Daka.

But the visitors were outclassed in the second period.

Leandro Trossard restored fourth-placed Brighton’s lead before Alexis Mac Allister shrugged off the disappointment of having a stunning strike ruled out for offside following a lengthy VAR check by adding a penalty and a brilliant late free-kick to take his tally to four goals in as many games.

“Of course I was annoyed,” Argentina midfielder Mac Allister told Albion’s website. “It was a fantastic goal and I’m not sure if I will score another goal like that in my life, but it’s football and we have to accept it.

“We have to get used to VAR, it’s part of the game now and of course sometimes it helps us with a decision.

“It was a fantastic performance by the boys. Apart from Fulham (a 2-1 loss in midweek) it’s been a good start for us and we’ll try to do even better in the next game.”