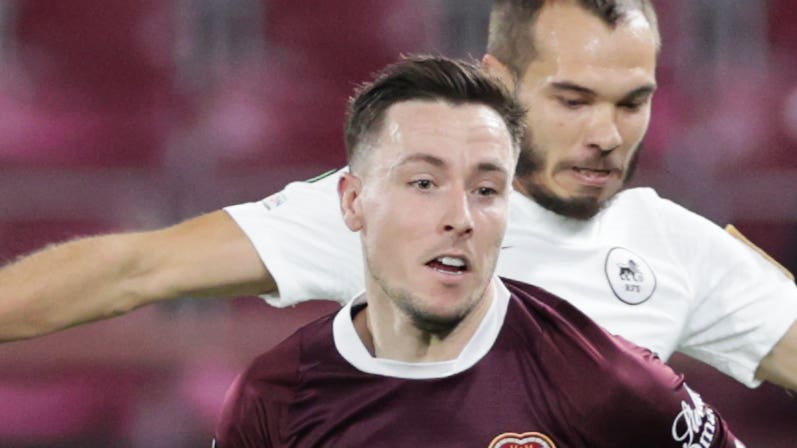 Hearts attacker Barrie McKay feels like he he has rediscovered his spark in time for Monday’s Edinburgh derby against Hibernian.

The 28-year-old was one of the outstanding players in the cinch Premiership last term and earned a Scotland call-up in September, but the little playmaker appeared to become less effective in the months prior to the World Cup break.
However, after being relied upon heavily in most matches while his injury-hit team competed in the Europa Conference League group stage, McKay – who scored a stunning goal in Wednesday’s 3-2 win away to St Johnstone – believes the recent shutdown has helped him regain his sharpness.

“It’s probably been a bit hot and cold,” said McKay, reflecting on his own season so far. “I think before the break I was maybe a wee bit off it.

“Before the break we were playing a lot of games against tough opposition and I was trying to do the best I could. Sometimes it works, sometimes it doesn’t. It’s just about keeping going and not letting the head go down.

“I’ve felt good since I’ve come back after the break. I feel like I’ve got my spark back.”

Hearts – plagued by injury and the demands of European football – are widely deemed to have had an underwhelming campaign so far, but they kick off 2023 three points ahead of their rivals in the battle for third place in the cinch Premiership.

“It’s massive to be three points ahead in third,” said McKay. “We’ve not been at our best this year but we’re still up there.

“It shows that we’ve probably been better than we’ve given ourselves credit for. It’s all about building on it and getting a consistent run together. I think that’s what we did really well last year, and that’s what we need to do now.”

Hearts are unbeaten in their last seven meetings with Hibs and McKay is relishing the chance to try to extend that run.

“We go into every game to win it, and the derby is no different,” he said. “Hopefully we can play our game and the result will take care of itself. The Edinburgh derby’s been great. My first game for Hearts was the derby at Tynecastle and the atmosphere was brilliant.”

McKay feels it is testament to Hearts’ squad depth that they are clear in third place despite being plagued by fitness issues this term. Their win at St Johnstone came on the back of a Christmas Eve showdown at Dundee United in which they lost key trio Craig Gordon, Craig Halkett and Stephen Kingsley to injury.

“It’s a really good squad,” said McKay, a regular starter who was used from the subs’ bench on Wednesday. “Not everybody is guaranteed to play but it’s all about being there for each other, pushing each other and getting the best out of each other.

“It’s a shame the injuries we’ve had but the boys who have come in have done really well. It shows the squad we’ve got that boys are able to come in and come out, and when you’re a sub, it’s important you come on and impact the game.”