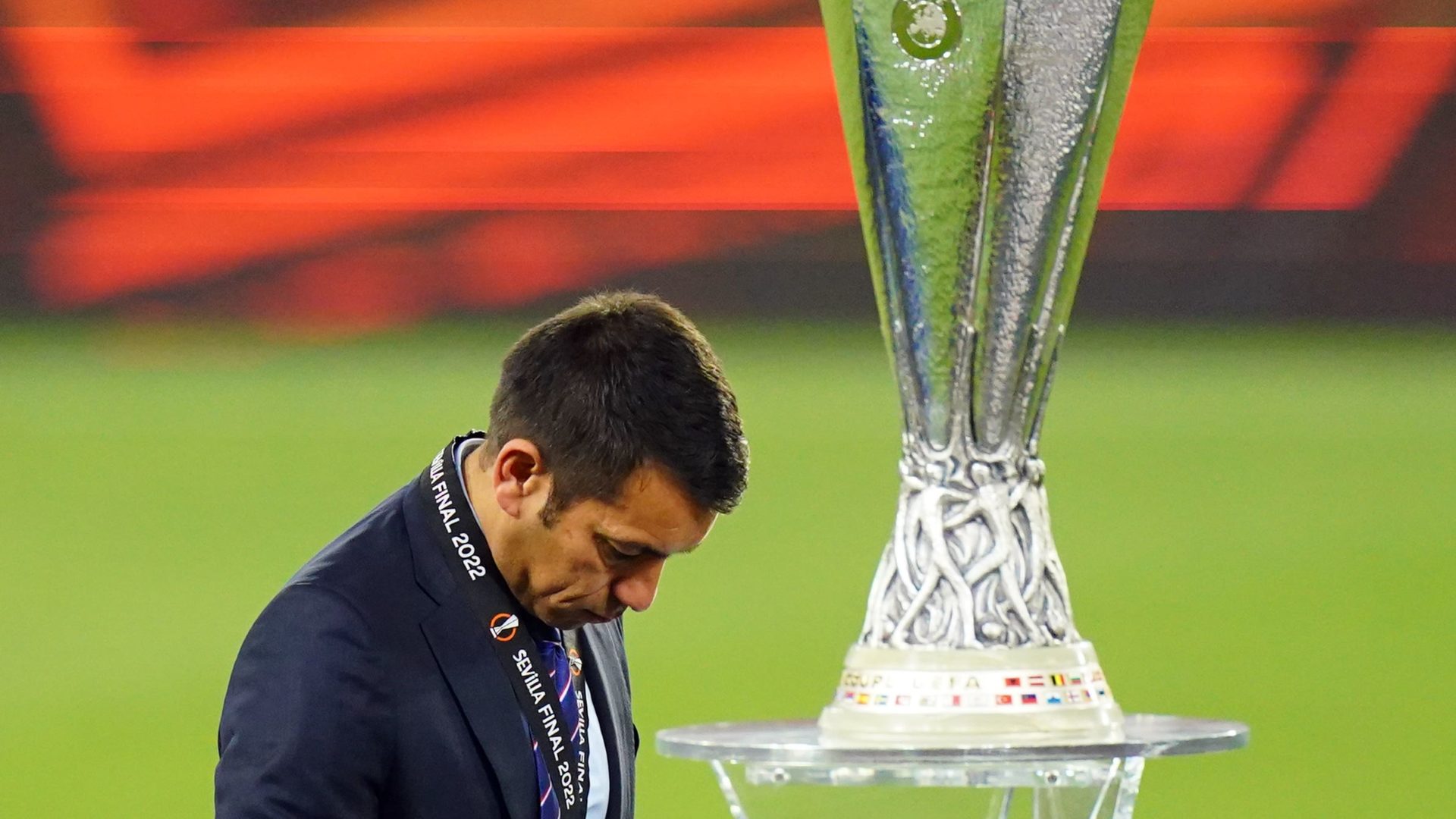 Giovanni van Bronckhorst: Rangers on wrong side of football fortune in Seville

Giovanni van Bronckhorst claimed Rangers were on the wrong side of football fortune after losing their penalty shoot-out to Eintracht Frankfurt in the Europa League final.

Joe Aribo opened the scoring in Seville in the 57th minute but Colombian forward Rafael Borre levelled in the 68th minute to take the game to extra-time where Frankfurt keeper Kevin Trapp made a fantastic last-gasp save from Ryan Kent.

Then came penalties where substitute Aaron Ramsey had his spot-kick saved by Trapp, the hero of the night.

Gers skipper James Tavernier scored as did substitutes Steven Davis, Scott Arfield and Kemar Roofe while Christopher Lenz, Ajdin Hrustic, Daichi Kamada, Filip Kostic and Borre scored their penalties for  a 5-4 win for Frankfurt, who celebrated while Rangers licked their wounds ahead of the Scottish Cup final against Hearts at Hampden Park on Saturday.

Former Netherlands captain van Bronckhorst said: “It was of course a big disappointment. If you lose a big final in Europe it will hurt.

“You do everything you can to win it and in the end it is a lottery and tonight we weren’t on the good side.

“But I can’t complain with what my players gave and before tonight but in the end it was a really tight game, it went all the way to penalties and we lost.

“It is a big disappointment because you are so close to winning a trophy but that’s also football.

“If you play a lot of big games, big finals, we will have memories that last for ever when you win them but when you lose it will hurt a lot.

“I lost the World Cup final – the biggest game there is and also a huge disappointment – but we have to move on, we have a big game on Saturday and next season we have to start all over again.”

The Gers manager brought on Ramsey and Kemar Roofe late in extra-time with an eye towards penalties and refused to point any blame on the Wales international.

He said: “We prepared well for penalties. Borna (Barisic) had to go off and he is one of the first penalty kickers.

“We had players who wanted to take a penalty and some who didn’t and we had our list ready and we had to adjust it because of the substitutes.

“It is never nice to lose, everyone is hurt and disappointed.

“Aaron, of course, was disappointed but he took responsibility to take the penalty.

“You can make it or miss it and unfortunately for us he didn’t make it but you want players taking penalties who are ready and comfortable also.”

Van Bronckhorst noted the significance of Trapp’s extra-time save from Kent’s close-range shot.

He said: “We had a big chance in the end, it was a great save.

“Especially in those minutes toward the end of the game any goal is decisive.

“It was a big chance, but in the end when you have chances you have to take them but again Ryan did everything he could to score.”