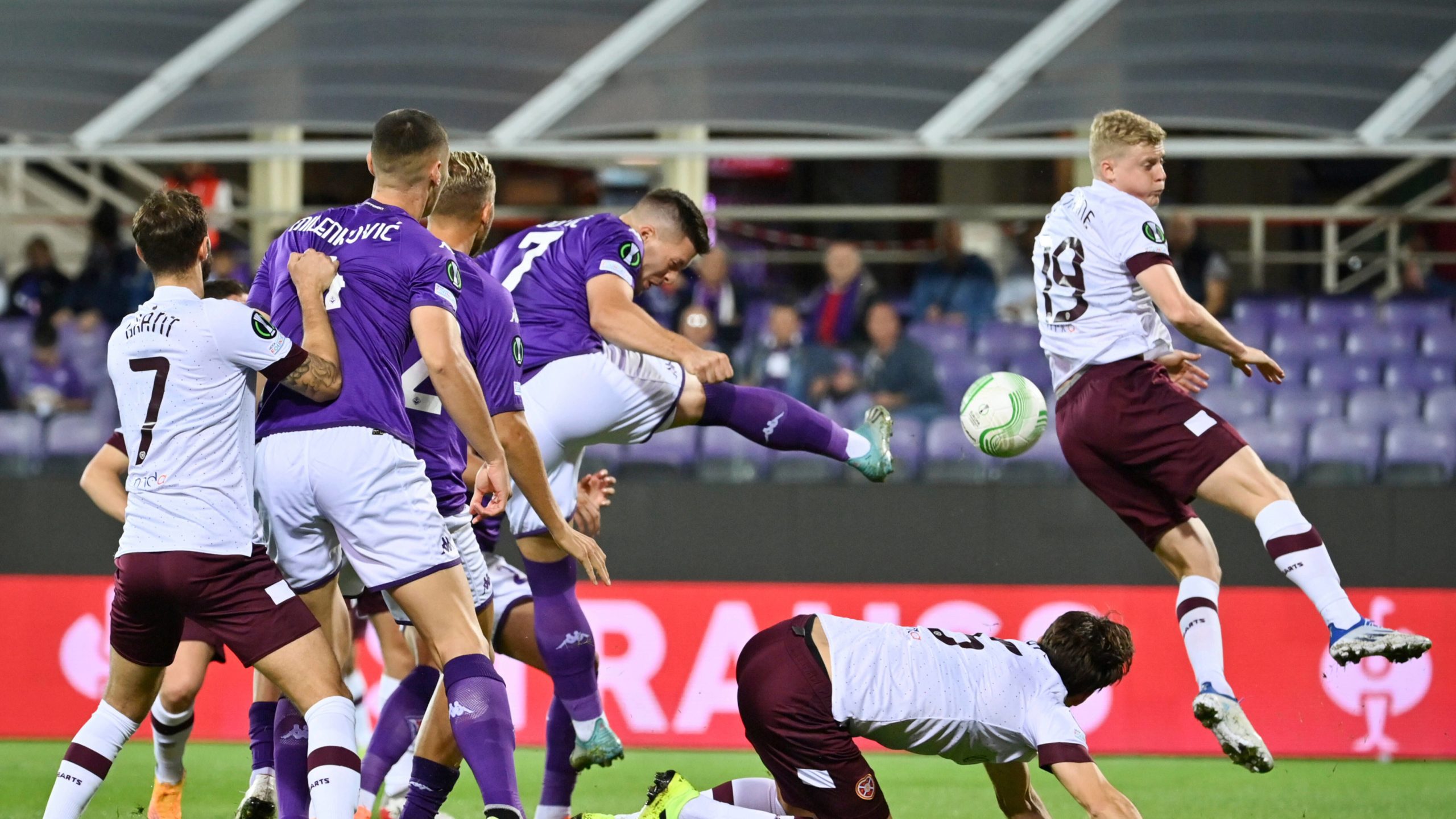 Hearts at least steadied the ship in the second half in the Europa Conference League in Florence after appearing to be on course for the sort of 7-1 thrashing handed out to Rangers 24 hours earlier by Liverpool.

Stephen Humphrys made it 4-1 early in the second half to give about 4,000 Hearts fans in the Stadio Artemio Franchi something to cheer before the home side restored their four-goal lead with a late penalty.

Hearts also suffered another defensive injury blow when Nathaniel Atkinson went off in the first half.

Robbie Neilson’s side retain slim hopes of progress from Europa Conference League Group A if they go on to beat RFS and Istanbul Basaksehir but would need Fiorentina to slip up in their final two games.

The Hearts manager had called for his side to press the Serie A side more aggressively higher up the pitch following a 3-0 defeat at Tynecastle last week and the tactic almost paid off inside 30 seconds.

Barrie McKay won the ball deep in the home half and Humphrys hit the post from nearly 25 yards before Jorge Grant’s follow-up was saved.

Atkinson crumpled in a heap with a lower leg injury as he defended the set-piece and he was off the pitch receiving treatment as Fiorentina took the short corner which led to Luka Jovic beating Alex Cochrane to the ball to head inside the post in the sixth minute.

Rolando Mandragora thumped an 18-yard strike off the post following another corner and Fiorentina doubled their lead midway through the half when skipper Cristiano Biraghi curled home a brilliant 20-yard free-kick after McKay was harshly penalised after pulling out of a challenge.

Gordon made a good stop from Nicolas Gonzalez but was soon beaten by the same player in the 32nd minute as Hearts were pulled apart.

The travelling fans might have feared following Dundee United and Rangers in seeing their team concede seven goals in Europe this season when Antonio Barak finished off a one-two with Kouame in the 38th minute.

Humphrys had pulled a shot past the post in the midst of the first-half rout and the on-loan Wigan striker pulled a goal back in the 47th minute. McKay sent Halliday on the overlap and the left-back squared for Humphrys to finish.

The visitors were much more competitive in the second half and looked to have closed the back door until Cochrane brought down Riccardo Saponara after selling himself on the edge of the box. Gonzalez converted the 79th-minute spot-kick.

Substitute Lawrence Shankland came close to a consolation when he chipped the goalkeeper from 45 yards, the ball landing on the roof of the net as Pierluigi Gollini scrambled back.