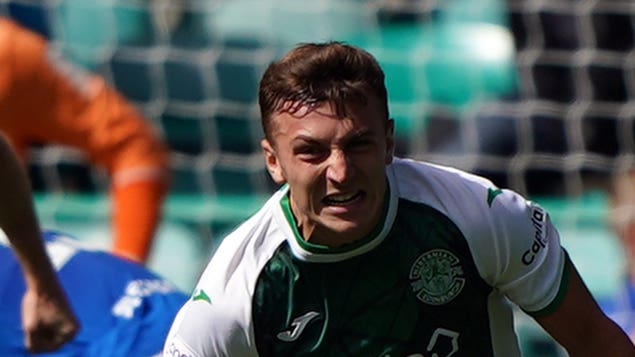 The midfielder scored twice in the second half to seal a second successive win for the Easter Road side.

Luis ‘Duk’ Lopes had put the Dons in front before they lost Liam Scales to a red card just before half-time. Martin Boyle’s penalty drew the home side level and then Campbell won it with two neat finishes.

His manager Johnson said: “Josh is trustworthy, one of the first names on the team sheet. He trains well every day, is a very fit player and a great lad.

“I think simplifying his game is important so he can be that Lampard-type character with less touches, getting more in the box and getting up with the front man.

“He is a very fit player who can make a lot of runs in behind the back four.

“He’s been exceptional. He’s a young man who has come through the academy and that’s what we’re looking for.”

Johnson admitted to having mixed feelings about the impending international break but hoped it would give the club’s longer-term injury casualties more time to recover.

He added: “The international break is a catch-22 because you want the momentum but it does buy us a couple of weeks to get players back.

“We have good players to come back, ones who will be like new signings.

“(Kyle) Magennis, (Kevin) Nisbet, (Elias) Melkerson, (Aiden) McGeady isn’t a million miles away, Kevin Dabrowski, Rocky Bashiri as well – you look at the squad and it’s going to be strong.”

Meanwhile, Aberdeen manager Jim Goodwin has called for the introduction of professional referees.

The Irishman accused Hibs’ Ryan Porteous of cheating to win a penalty and believes VAR and a better standard of officiating are both necessary.

He said: “We’ve spoken about VAR being brought in to assist referees because of the big mistakes that were made last season. And then there has to be an argument for full-time referees as well.

“We must be one of the only top leagues in Europe that is still kicking around with part-time referees.

“Let’s look at finding the money to make it a full-time job and then they can sit down like we do as professionals and really analyse the game, good, bad and ugly. As I don’t know when they get the opportunity to really do that.”