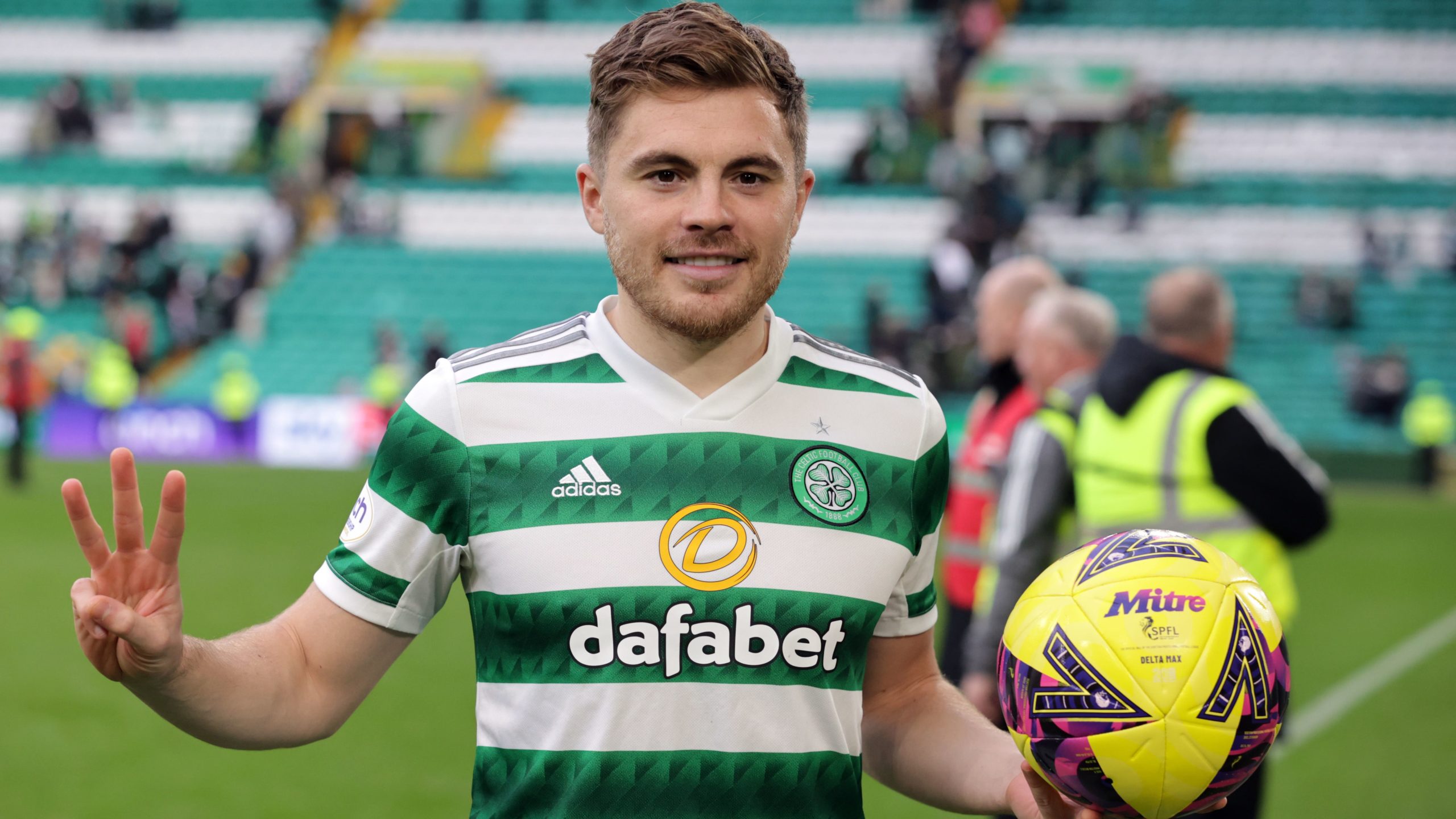 James Forrest took his tally of Celtic goals to a 100 with a hat-trick in the 6-1 cinch Premiership hammering of Hibernian.

The 31-year-old Scotland winger has dropped down the pecking order at Parkhead but in his first start of the season he scored either side of a Giorgos Giakoumakis strike to give the league leaders a commanding interval lead.

Half-time substitute Elie Youan pulled a goal back in the 56th minute for the visitors before Forrest, who came through the ranks at Celtic, completed his hat-trick two minutes later with further strikes from Giakoumakis and substitute Daizen Maeda underlining Celtic’s superiority.

Ange Postecoglou’s men may be struggling for points in the Champions League – they have one after four group games – but they remain the team to beat domestically and they moved five points ahead of second-top Rangers who play Motherwell at Fir Park on Sunday.

Amid a hectic period of Celtic fixtures, Forrest, Giakoumakis, Anthony Ralston, Alexandro Bernabei and Aaron Mooy were all back in the side.

The typical early Parkhead onslaught brought rewards in the eighth minute when Sead Haksabanovic’s cross from the left was met by Forrest and he knocked a volley back across former Celtic keeper David Marshall and in at the far post.

The Edinburgh side, with Harry McKirdy making his first start and veteran defender Lewis Stevenson back in the side, tried to respond but Celtic were in rampant mood and went further ahead in the 18th minute when Bernabei’s cross from the left was buried from 10 yards by Giakoumakis.

The third goal followed six minute later when Haksabanovic’s cut-back from the left ended up at the feet of Forrest, who took a touch and fired in a decent shot which Marshall saved, only to let it fumble out of his grasp and over the line.

It was all over bar the scoreline.

Midfielder Reo Hatate had the ball in the Hibs net just before the break but the offside flag was already up while a penalty claim, when Hibs defender Ryan Porteous, challenged Giakoumakis inside the box was ignored by referee Steven McLean.

Haksabanovic was replaced by Maeda which meant little respite for the visitors on the left flank.

However, seconds after Bushiri had blocked a goal-bound shot from Forrest, Hibs raced up the park with Martin Boyle playing in Youan to beat keeper Joe Hart at his near post with a powerful drive.

But any notions of a comeback were soon dispelled when Mooy took advantage of a Nohan Kenneh mistake in midfield to play in Forrest whose deflected strike from 16 yards sped high past Marshall.

Forrest was soon replaced by Liel Abada with Oliver Abildgaard on for Matt O’Riley.

Substitute Kyogo Furuhashi, on for Hatate, rattled the Hibs post with a drive from just inside the box, and Marshall saved a one-on-one against Abada, before Maeda converted a Mooy cross for nimber six in the 89th minute, to seal a comprehensive win.