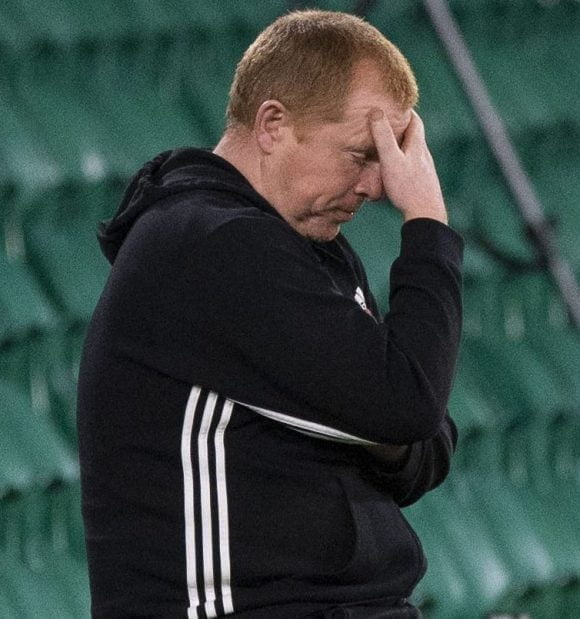 PETER MARTIN: Celtic fans’ standards have slipped and their obsession lies with ten in a row

Celtic only have themselves to blame for their Champions League exit.

Yet again their calamitous defence found wanting and exposed brutally with one great strike in the first half and the eventual winner, a big punt up the park and El Hammed outrun and outfoxed by Tokmac Nguen.

The manager revealed after the game that some players approached him to say if there was no Champions League football they wanted out. Great!

Hire a minibus and book seats for Julien, Ajer, Edouard and Ntcham, because I don’t believe for a single minute that any Scots player with a modicum of arrogance would have the balls to go up to Lennon and say that.

I’ve named those four players because in my mind two of them clearly think they are reincarnations of Franco Baresi and Franz Beckenbauer.

Ajer and Julien are suspect and give teams countless opportunities to score. The manager says Julien is rusty and takes time to get going.

Yes, you are 100% right Neil, but when he’s warmed up he performs like a 1970’s Austin Allegro! The other one thinks he’s a Rolls Royce, but looks like a Ford Mondeo pulling a caravan.

Edouard is a fans favourite, but he wants to go and Ntcham is in the same boat, so get them out and get new blood in to go again in the mediocre Europa League.

Let’s not be building up Ferencvaros as a good outfit after the event. They are a team Celtic should have taken three or four off, but the same old problems surfaced yet again.

An unsettled team with not enough signings in the right place in on time and ready to hurdle these unfair Champions League qualifiers.

The manager came into the after-match press conference and says he has to shoulder the blame. He’s right. The buck stops with the manager and he certainly raised a few a few eyebrows with no Odsonne Edouard in the line-up and no striker to replace him.

Patrik Klimala and Albian Ajeti warming the bench while Ryan Christie led the line with Elyounoussi, Forrest and Ntcham trying to support the attack. Why buy the strikers if you are not going to play them?

He said they were not fit. Really? He was saying for the last couple of weeks that Klimala had worked hard and was flying. Maybe just not good enough was the term he should’ve used.

And let’s not mention Leigh Griffiths because his absence has once again left Celtic wanting. I would punt him now! Tying scarves around a post doesn’t get you into the Champions League group stages.

Celtic fans feel like this is groundhog day in August and they are right. Coronavirus or not, there was more than enough cash and time to get a team capable of winning that match.

The players are not good enough for the Champions League and it could be a good few years before any Celtic fan hears that theme at Celtic park the way things are going.

As the rest of Europe’s elite move further and further away from Scottish football, some Celtic fans standards have slipped and their obsession lies with ten in a row and ramming it down the throats of their rivals from across the city.

If that’s the level of your ambition for your club, the baw’s burst!

The 0-0 games on Sky sports this weekend will be at Accies v Rangers and Hibernian v Aberdeen over Saturday and Sunday. That is exactly what commentator Ian Crocker and the Sky executives will be thinking as yet another weekend of Scottish football passed by with dire performances over 90 minutes with a style of play that would get football purists looking for the sick bin.

The image of our game has been well and truly tarnished over the five months since the start of lockdown.

If ever there needed to be further proof of why so many clubs wanted changes to the size of our Premiership, the evidence has been played out to empty and soulless stadia up and down the country.

Livingston find themselves at the foot of the table because they are the worst culprits of football from a bygone era. Booting the ball up the park to nobody or a big tall guy called Dykes is now a thing of the past.

Hopefully, Anthony Stokes might force them to try and play some of the better football they are capable of on the deck.

Honestly, the first forty-five minutes of Aberdeen v Livingston was murder! St Johnstone v Hibs, marginally better, with a late penalty to keep Hibs up at the top with Rangers.

The managers will make no apologies for the way they go about their business trying to avoid defeat and trying to get three points.

Survival is the name of the game and my heart sank on two occasions when two managers I interviewed both said staying in the division was their first ambition and both these guys were in charge of teams that finished top six last season.

This league from 3rd downwards is all about survival and that needs to change. We also need someone to lead from the top and have enough power to stop the self interest brigade from dragging our game further into the gutter.

Can you name me the head of sales and marketing at the SPFL? The guy who is supposed to go out and land a major sponsor for the league? Don’t worry if you can’t, because I don’t have a clue either!

We need to pay for someone with the same qualities as a Barry Hearn. Someone who can sell sand in the desert or cow dung to a farmer in the case of the SPFL at the minute.

We need goals this weekend and entertainment to try and at least show we have something to offer the viewing public. Not that it will matter to the Sky executives because on the 12th of September the EPL is back.

Scottish football will then be ranked alongside the lower leagues of England and a feature on their main news channels just after the cricket, a feature on tennis and bowls.

Finally, let’s have no more comments from Jack Ross telling us to talk the game up in Scotland.

How about you and your fellow managers giving us something to shout about on the field.

Painting pictures of a Monet when the reality is a crap sketch from a ten year old in art class is not what we are paid to do in the press box.