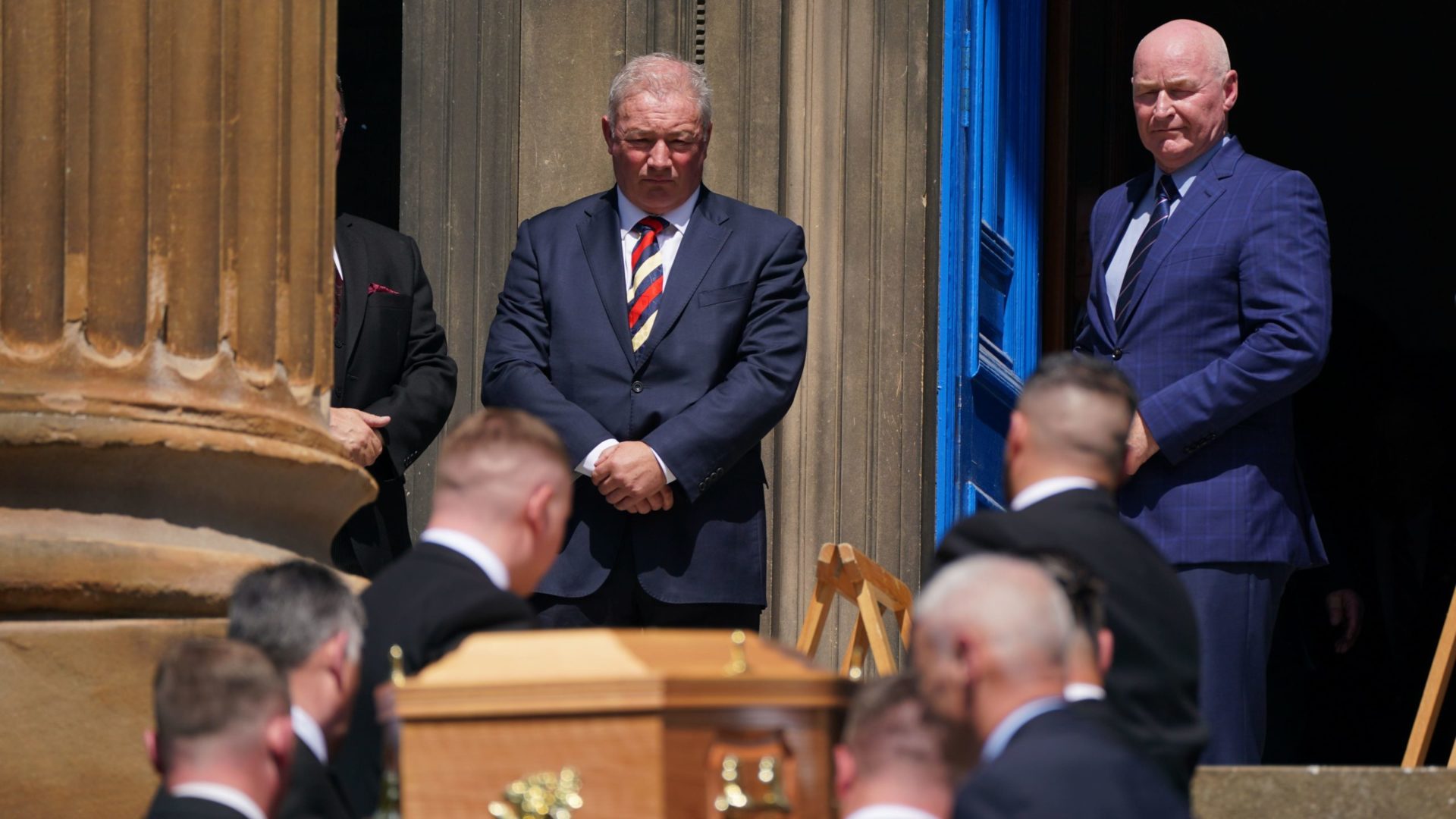 By By Gavin McCafferty PAJuly 18, 2022No Comments

Andy Goram got the farewell he requested as former Rangers team-mates Ally McCoist and John Brown paid tribute to him at a funeral service in Glasgow.

Former Ibrox director Donald Findlay QC also spoke at the service at Wellington Church in the west end of the city.

Sir Alex Ferguson, the man who gave goalkeeper Goram his Scotland debut and signed him for Manchester United, was among the mourners at the church in the environs of the University of Glasgow.

Before arriving at the church, the funeral cortege drove by Ibrox Stadium, where hundreds of people lined both sides of Edmiston Drive to pay their respects.

Floral tributes were left on the main steps of the stadium, including one in the shape of a pair of goalkeeper gloves and others that spelled out ‘Goalie’ and ‘Papa’.

A lone piper played ‘Scotland the Brave’ as Goram’s coffin was carried up the steps of the church. McCoist, Brown and former goalkeeper Alan Rough, who played alongside Goram for Scotland and Hibernian, were among those carrying the coffin into the church.

Brown said: “He was a guy who was loved by everyone. Even opposing players and managers, they respected Andy Goram. He was an outstanding goalkeeper.

“Not only that, he was a wonderful personality. He wrote me a letter, which I still have, when he was leaving the (training) camp in America, and it’s a delightfully written piece of prose, and from his heart. And I think you could sense today that he was in everyone’s heart.

“It was a superb celebration. The sincerity, the touch of humour, it was very apparent.

“It was a unique service, I haven’t been at a similar service in the past. Andy had a big say in that apparently. He knew what he wanted for his service and I think he got it.

“There were very good speakers, eloquent guys. We were treated to several outstanding contributions from outstanding people.

“When Donald Findlay speaks, for example, you could be in the courtroom, because he is very compelling. Everyone was.”

About 20 fans who had gathered to pay tribute outside the church were ushered inside to hear the service after the coffin was carried in.

“He was very close to the fans,” Brown said. “He was so likeable. He was a wonderful personality and that’s the main thing I remember about him, apart from his outstanding goalkeeping.

Former Ibrox managers John Greig and Alex McLeish, who played alongside Goram for Scotland, were also present as was Archie Knox, the assistant of late Rangers manager Walter Smith, who signed Goram.

Former Scotland team-mates included Jim Leighton, who vied for the goalkeeper’s jersey with Goram for more than a decade, and Tosh McKinlay, a former Celtic left-back.

A floral tribute from Sir Rod Stewart was placed inside the hearse.

Bury-born Goram started his career with Oldham before following in the footsteps of his father, Lewis, and becoming a Hibs goalkeeper.

He signed for Rangers in 1991 and won five Scottish titles and five domestic cups, helping the team to a record-equalling nine consecutive league triumphs.

After leaving Ibrox and quitting international football in 1998 with 43 caps and appearances at European Championships in 1992 and 1996, Goram went on to play for Notts County, Sheffield United, Motherwell, Manchester United, Coventry, Queen of the South and Elgin City.