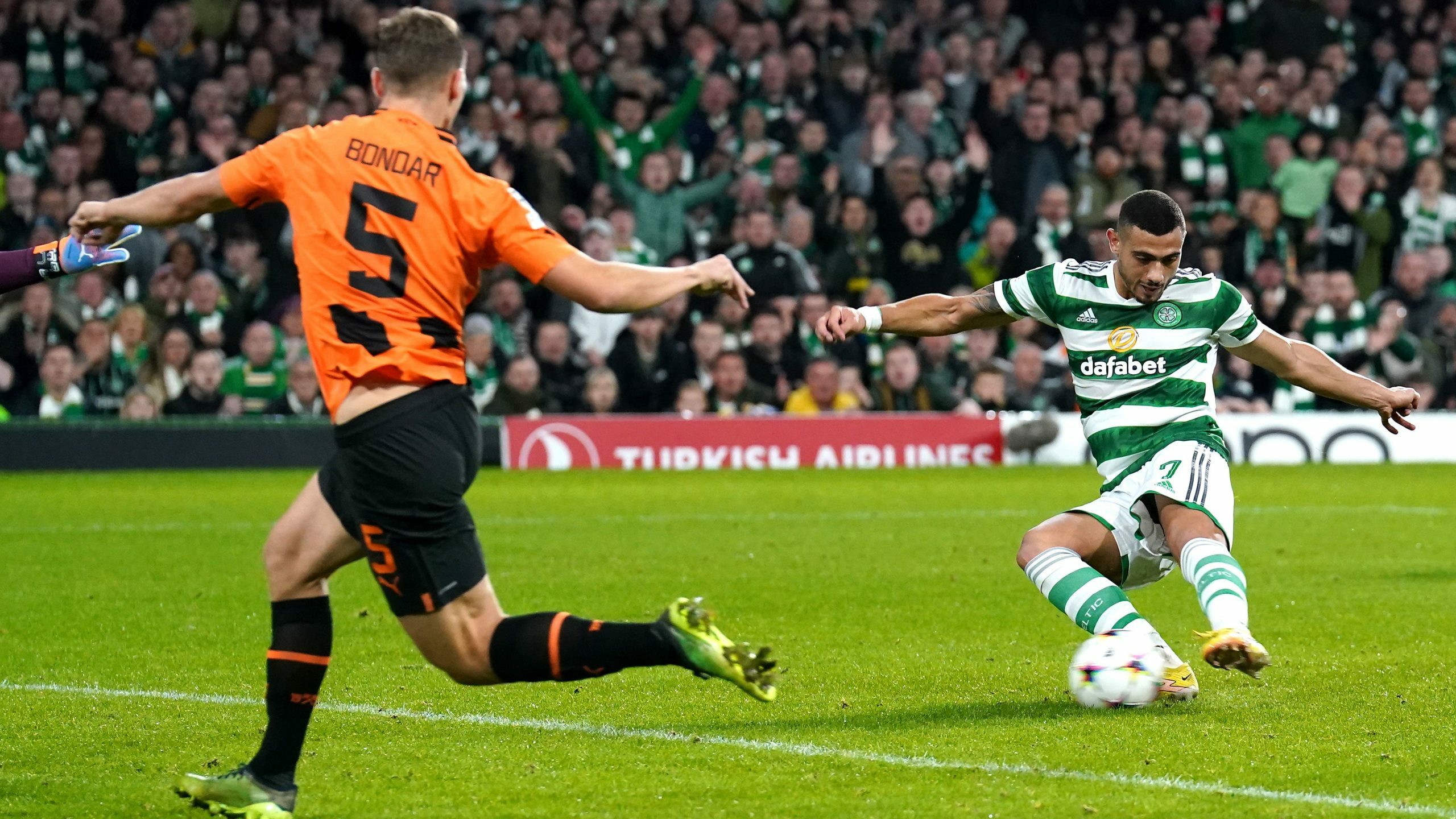 By By Gavin McCafferty PAOctober 25, 2022No Comments

Celtic will not play in European football beyond the World Cup break after being held to a 1-1 home draw by Shakhtar Donetsk.

Giorgos Giakoumakis gave the hosts the lead at half-time but a brilliant finish from exciting young talent Mykhailo Mudryk earned the visitors a point and made it 10 Champions League home games without a win for Celtic, a run which stretches back nine years.

The result consigned Celtic to a bottom-placed finish in Group F ahead of their final game against holders Real Madrid in Spain next week and blocked their escape route to the Europa League.

The Scottish champions did not quite create the quality of chances they had in earlier group games but Kyogo Furuhashi missed an excellent opportunity to put them back in front. However, the visitors subsequently produced a strong contender for miss of the season.

Celtic’s tally of one point and two goals from their opening four matches was scant reward for their attacking ambition and Ange Postecoglou was even bolder in his approach for their final home match in this season’s competition.

The Celtic manager employed a 4-2-4 formation with Giakoumakis and Furuhashi starting together for only the second time, and the first since a 2-0 win over St Johnstone 12 months ago. Sead Haksabanovic and Liel Abada were out wide with creative midfielders Reo Hatate and Matt O’Riley behind them.

Furuhashi dropped deep to engineer Celtic’s first shooting chance, which led to Giakoumakis hitting a first-time effort over from 25 yards.

Shakhtar took the sting out of the game early on and Celtic needed some good covering from Greg Taylor to stop the visitors’ main threat, Mudryk, dribbling through on Joe Hart.

Giakoumakis headed off target and O’Riley curled not far wide from 20 yards but Celtic took the lead in the 34th minute through their first real opportunity.

Haksabanovic struggled to make set-pieces count in the first half but he made the difference by getting to the byline and driving in a low cross. Abada’s effort was blocked and Giakoumakis turned the ball home from seven yards.

Celtic kept the pressure on and both O’Riley and Giakoumakis forced saves from long range.

But the hosts had Hart to thank for going in ahead at half-time. Mudryk was played through by Lassina Traore and the goalkeeper did well to narrow the angle and block the Ukraine international’s shot with his chest.

Mudryk was at the heart of another chance for the visitors which ended with Oleksandr Zubkov sliding in to hit the side netting, and the 21-year-old soon did it all himself in the 58th minute.

Celtic lost the ball just inside the Shakhtar half and Mudryk was soon sprinting towards the home box. The wide player cut inside and made space for himself to fire into the roof of the net from 20 yards.

Celtic had an excellent chance to swiftly regain the lead when Giakoumakis played in Furuhashi but the Japan forward scuffed a weak effort straight at the goalkeeper.

The home side had a huge let-off following another blistering break from Mudryk, who squared for what looked like a certain goal for Danylo Sikan. But the substitute casually side-footed wide of an open goal from six yards.

O’Riley forced a decent stop from long range and stroked a first-time effort wide from 15 yards but Celtic were generally lacking in conviction in their passing around the Shakhtar box, despite some decent crosses from substitute James Forrest.

The visitors knew a point would be enough to give them the chance of a second-placed finish despite RB Leipzig’s win over Real Madrid and they soaked up some late pressure.