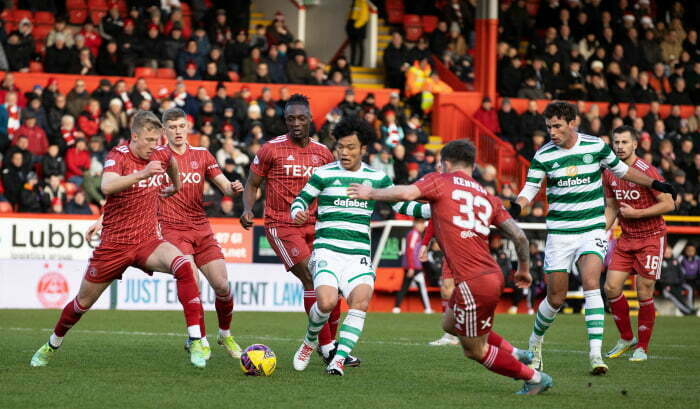 By Blair MalloyDecember 17, 2022No Comments

Celtic travelled to Pittodrie looking to maintain a 12-game unbeaten run in the granite city. Aberdeen meanwhile had a formidable home record this season, which had seen only Motherwell take all three points away.

Jota asked the first question of Aberdeen goalkeeper Kelle Roos after 13 minutes. The Portuguese winger cut inside before unleashing a curling effort that the Dutchman palmed away comfortably.

Reo Hatate posed the next threat on the home goal. The Japanese midfielder’s long-range shot seemed to squirm away from Roos, before finally being hacked clear.

Postecoglou’s side dominated the ball in the opening half hour, with the home side contained to attempting quick counter attacks any time they found themselves in possession, often to no avail.

Jim Goodwin had his side drilled to frustrate Celtic for as long as possible. The question remains if they can hold out for long enough?