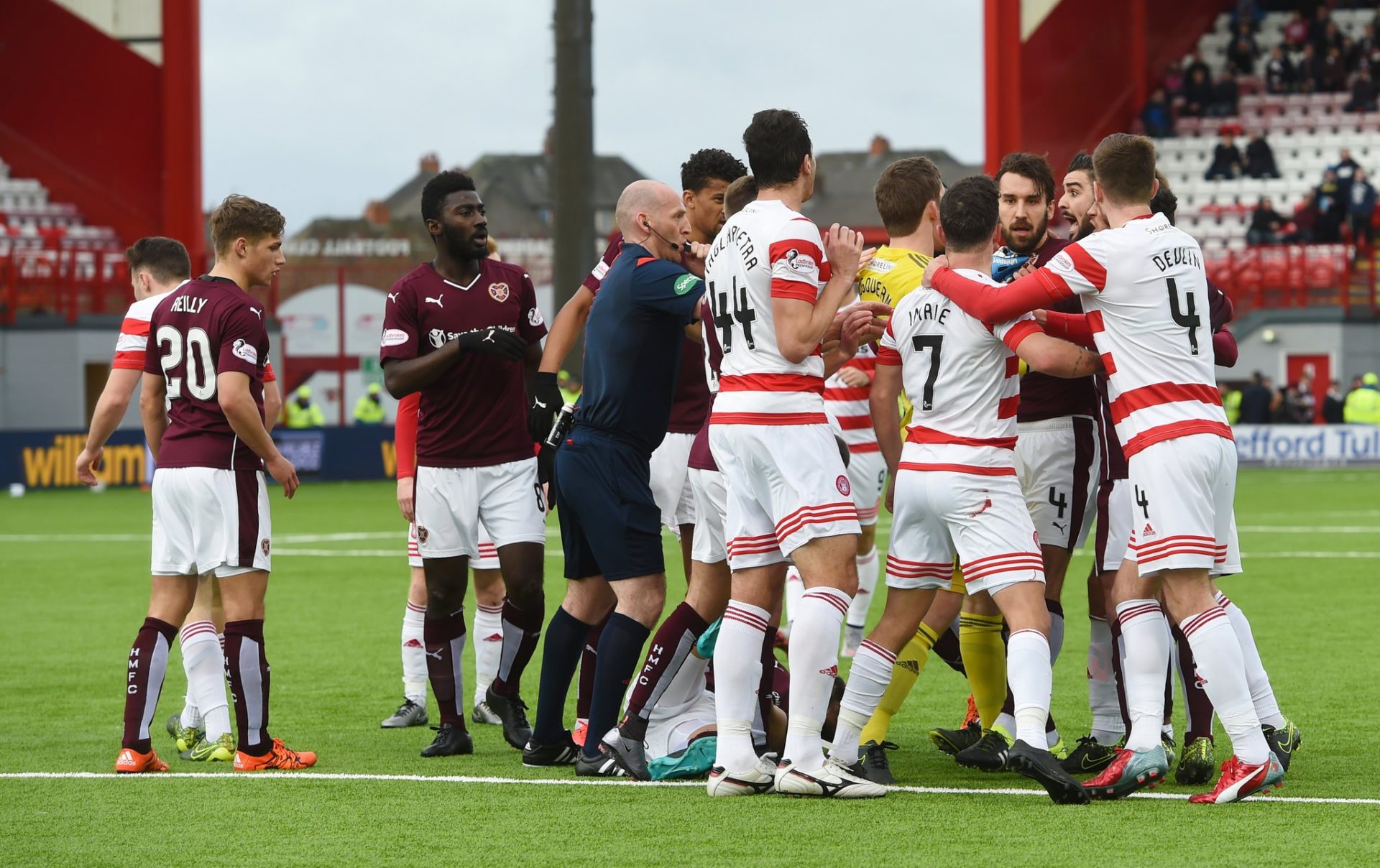 Hamilton held Hearts to a goalless draw at a windy New Douglas Park in an action packed game that saw both sides reduced to 10-men.

The Jambos started the brighter of the two and came close on 18 minutes when Igor Rossi struck the post and Michael McGovern saved from Calum Paterson on the rebound.

It was McGovern to the rescue again on 37 minutes when he palmed away a Billy King volley.

However when the ball broke to the edge of the area Rossi lunged in with both feet on Accies’ Darren Lyon. It sparked a mass brawl between both sets of players. Referee Bobby Madden showed the Brazilian a straight red while Prince Buaben, Alim Ozturk and Darian Mackinnon were all cautioned.

Hamilton began to impose themselves more on the game in the second-half and came close on 64 minutes when Mikey Devlin had a header expertly saved from Neil Alexander.

The Jam Tarts were still a threat though and Blazej Augustyn came within inches of breaking the deadlock fifteen minutes from the end when his header rattled off the crossbar.

Accies found themselves down to 10-men three minutes from time when substitute Jesus Garcia Tena was given his marching orders for a tackle from behind on Arnaud Djoum.

And the Jambo’s were denied a last-gasp victory when Dario Zanatta headed off the crossbar and McGovern saved from Juanma from point-blank range.

After the game, under-fire Hamilton boss Martin Canning was pleased to bounce back from Tuesday night’s 8-1 thrashing at the hands of Celtic.

“We’ll have ups and down’s, the most important thing is how you react to a down and that was a good reaction.

“It would have been nice to have won the game with us playing the game against 10 men for 50 minutes but when your an experienced team like Hearts its difficult to go and break them down.”

Meanwhile Hearts manager Robbie Nielson was satisfied with a point.

“It was probably the most eventful game without goals, this is one of the hardest places to come but I thought if we stayed with 11 men we would have won the game.

And he had no complaints over Rossi’s sending-off.

“I think its the right decision, he goes in with two feet and when you do that its a red card end of story. It was a silly challenge and hopefully he won’t do it again.”