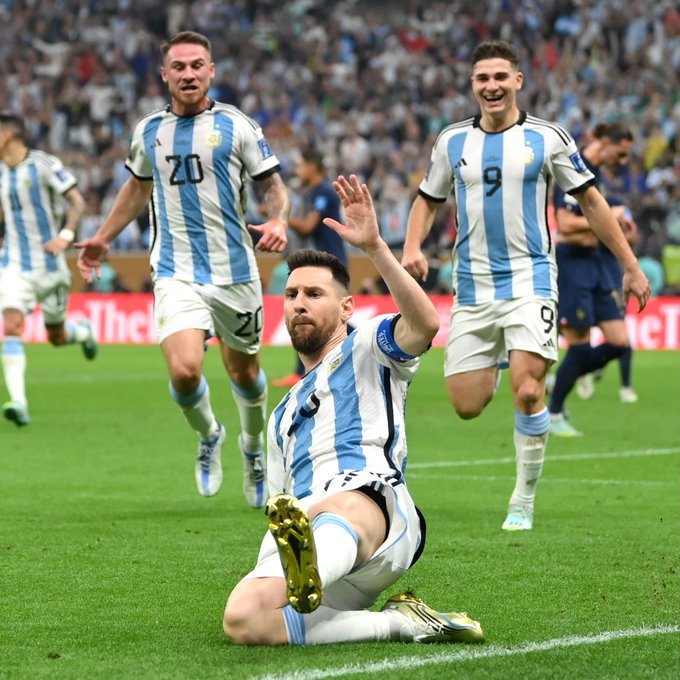 By Blair MalloyDecember 18, 2022No Comments

Argentina have beaten France on penalties to be crowned World Champions, after a 3-3 draw in a World Cup Final for the ages.

Lionel Messi scored a double on his way to finally becoming world champion and completing his astonishing collection of honours.

Angel Di Maria also got on the scoresheet to put Argentina 2-0 ahead, as they looked to have the game sewn up with 10 minutes of normal time left. However, Kylian Mbappe was always going to have a say and scored a quick fire double to send the game to extra time.

In a stunning end, to an incredible game, Messi scored what he thought was the winner with minutes left before Mbappe completed his hattrick to send the game to penalties.

From there Lionel Scaloni’s men were dominant, running out 4-2 winners to claim their crown.

Both managers had gone to great lengths to play down this final as a straight shootout between Lionel Messi and Kylian Mbappe. Given what both were on the cusp of achieving, it was hard not to make it all about the Paris teammates.

The imperious Mbappe was looking to add a second World Cup to his trophy cabinet before the age of 24. Messi meanwhile, on the cusp of immortality with Argentina and potentially taking the crown of greatest player ever to set foot on a park.

Both players had more than capable supporting casts, however. Argentina have uncovered gems in the form of Manchester City forward Julian Alvarez and dynamic midfielder Enzo Fernandez, both graduating the River Plate finishing school before lighting up the world stage.

France meanwhile looked towards players at the other end of their career, with 31-year-old Antoine Griezmann enjoying an Indian summer and in the process becoming a player of the tournament contender.

Argentina were having the better of the opening stages as Messi began to orchestrate the waves of attacks. Angel Di Maria fired well over just after the 15-minute-mark, as France looked like they had yet to put the key in their ignition.

Before Les Bleus could get going they found themselves behind. Di Maria danced into the box from the left-hand side, before Ousmane Dembele was judged to have brought the Juventus man down.

There was only one man to step up, Argentina’s number 10. Messi rolled the ball past Hugo Lloris with the coolness of a man playing in the park on a Sunday morning, as he took one step closer to greatness.

With 15 minutes left in the half, Argentina punished France again and took a commanding two goal lead. Messi lit the touch paper on a devastating counterattack finished by fellow veteran Di Maria, who fired the ball into the bottom corner to spark emotional scenes in the Argentine end.

Things were getting drastic for France as they could feel the final slipping away from them.

Didier Deschamps reacted by making a double substitution before half time, with Olivier Giroud and Ousmane Dembele being withdrawn for the energy of Randal Kolo Muani and Marcus Thuram.

Argentina and Messi began the second half the same way they ended the first, playing with a verve and fluidity as they looked for a third to kill the game as a contest. As the clock struck the hour mark, France still waited for their first shot on target.

Argentina seemed to be running at double the pace of their opponents, even as the clock wore on towards the 90.

Mbappe seen his first sight of goal with 20-minutes left but could only find the stands.

With 10 minutes left however, France were given a lifeline as Randal Kolo Muani was taken down in the box. Kylian Mbappe stepped up and pulled a goal back for his side, as they somehow had a route back into this match.

Almost unbelievably, less than two minutes later and Deschamps’ side were level. The ball fell to Mbappe on the left of the penalty box, who rifled in an incredible low volley to level the score, as millions watched on in disbelief.

The engravers would have been forgiven for already starting the ‘ARG’, such was the completely one-sided nature of this game, yet somehow it had become a contest for the ages.

Lionel Messi almost provided the show stopping climax seven minutes into injury time, but his long-range effort was palmed away by Hugo Lloris.

France looked the better of the sides as the game entered extra time, but it was Argentina who has the first real chance. Lautaro Martinez came off of the bench to find himself through one on one against Lloris. Bayern Munich defender Dayot Upamecano done enough though to come across and block the danger.

Three minutes into the second period of extra time and this pulsating game took another twist. Lionel Messi broke the French offside trap by the narrowest of margins, before feeding Martinez, who’s parried shot fell back to the talismanic number 10. Messi somehow managed to force the ball over there line in a haze of confusion and ecstasy in the stands.

In a game that had everything, the crowd were treated to even more drama, as France were awarded another penalty with four minutes left. Kylian Mbappe stepped up again and stroked the ball home to become the first player to score a hattrick in the final since 1966.

Both sides had gilt edge chances to win the game in the final minute of the match. First Kolo Muani was denied by a stunning Emiliano Martinez save, before Lautaro Martinez directed a free header wide at the other end.

It was Argentina who would take the game on penalties, with full back Gonzalo Montiel the unlikely hero as he dispatched the winning spot kick.