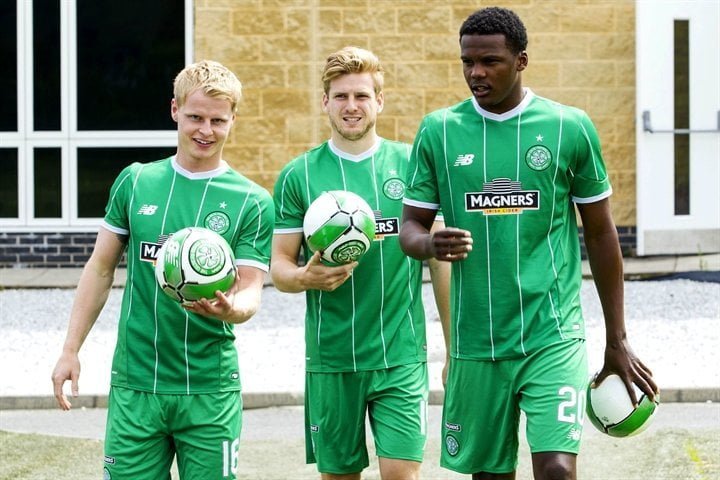 Stuart Armstrong knows only too well what it’s like to be the new guy at Lennoxtown – that’s why he’s helping out new team-mate Dedryck Boyata settle in at Celtic.

The defender completed his third day of training on Thursday with his new team-mates having arrived earlier this month from Manchester City.

And Armstrong, who joined the club in January from Dundee United along with Gary Mackay-Steven, has made sure the Belgium international Boyata is adapting to new surroundings.

“I’m giving him a lift in and out and he’s still not produced any money yet!” Armstrong said, jokingly. “But I’m sure he will, he is really nice guy, very chatty.

“It’s good because Gary and I know what it’s like being the new player, so we’re being friendly with him and he’s mixing in with all the boys so it’s good.

“Personally, it’s good to get that period out of the way where you get used to things: meet the boys, the fans and see the stadium. Now you can just focus on the football and not have to worry about being the new guy.”

Both Armstrong and Mackay-Steven were forced to hit the ground running after their moves from United as Celtic were involved in Europe with a last-32 leg against Inter.

The midfielder relished the opportunity of playing against the Nerazzurri and is desperate to sample more at Europe’s top table.

Icelandic outfit Stjarnan are just one of the teams that stand between Celtic and the Champions League and Armstrong is under no illusions of how difficult the task of reaching the group stages will be.

“These are very important games there’s no doubt about that. It’s more excitement rather than pressure for us.

“You grow up watching Champions League games and those are the games you want to play in. We had a little taster of European football last season and personally I want to taste more.

“I really enjoyed that game. I’d played in a couple of big games before – maybe not as big as that one.

“I think playing at that level will improve any player. It’s a great opportunity to experience different countries, stadiums and atmospheres. That’s the ultimate goal but it’s a tough ask for any club to reach that stage.”

Armstrong was in America along with Mackay-Steven during the close season and a chance meeting with a Celtic fan in New York made him realise the club’s worldwide appeal.

“It was quite surreal. We were sitting in a coffee shop and we saw a guy outside with the new Celtic top on. For a laugh we thought we’d go over and say hello,” he said.

“Gaz put on the worst American accent I’ve ever heard in my life for a moment I don’t think he knew who we were and then he realised and we had a nice wee conversation.

“It was his birthday and he’d got the shirt for his birthday. It was a good chat and it did hit home that Celtic are a worldwide club.”