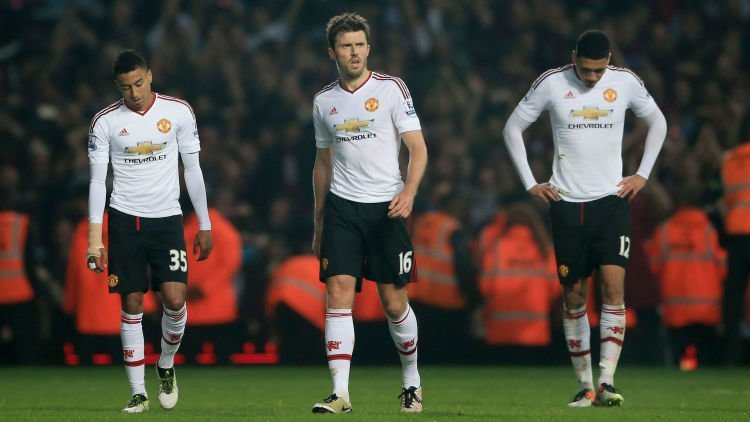 Louis van Gaal’s men arrived at Upton Park looking to be the party-poopers, knowing victory in the last-ever match at the Boleyn Ground would put the battle for Champions League qualification in their own hands heading into the season finale.

Anthony Martial’s brace after a deflected Diafra Sakho opener but United on course for a crucial three points, only for Michail Antonio and Winston Reid to see West Ham sign off with an unforgettable 3-2 win.

The loss leaves the Red Devils two points of City heading in the final match of the campaign. United need to beat Bournemouth and hope their neighbours lose at Swansea as their far superior goal difference means a draw at the Liberty Stadium would be enough for Manuel Pellegrini’s men.

“We have to (stay focused), that’s the situation that has presented itself now,” midfielder Carrick told MUTV.

“We were in control of it going into the West Ham game but we’ve let it slip. We have to win our last league game now and then see what happens.

“It’s no good for us. We got ourselves back in the game and then didn’t really help ourselves with giving away free-kicks. We have to be cleverer than that.

“We put ourselves under pressure by letting them put the ball in the box. In the end that’s won them the game and we’re very disappointed.”

It was a frustrating return to Upton Park for former West Ham midfielder Carrick, who was keen not to blame the pre-match trouble outside the ground for their loss.

“Whatever has gone on beforehand, you’ve just got to get on with it,” he said.

“We were here, we were ready and we had over an hour to prepare for the game. It’s no excuse.”