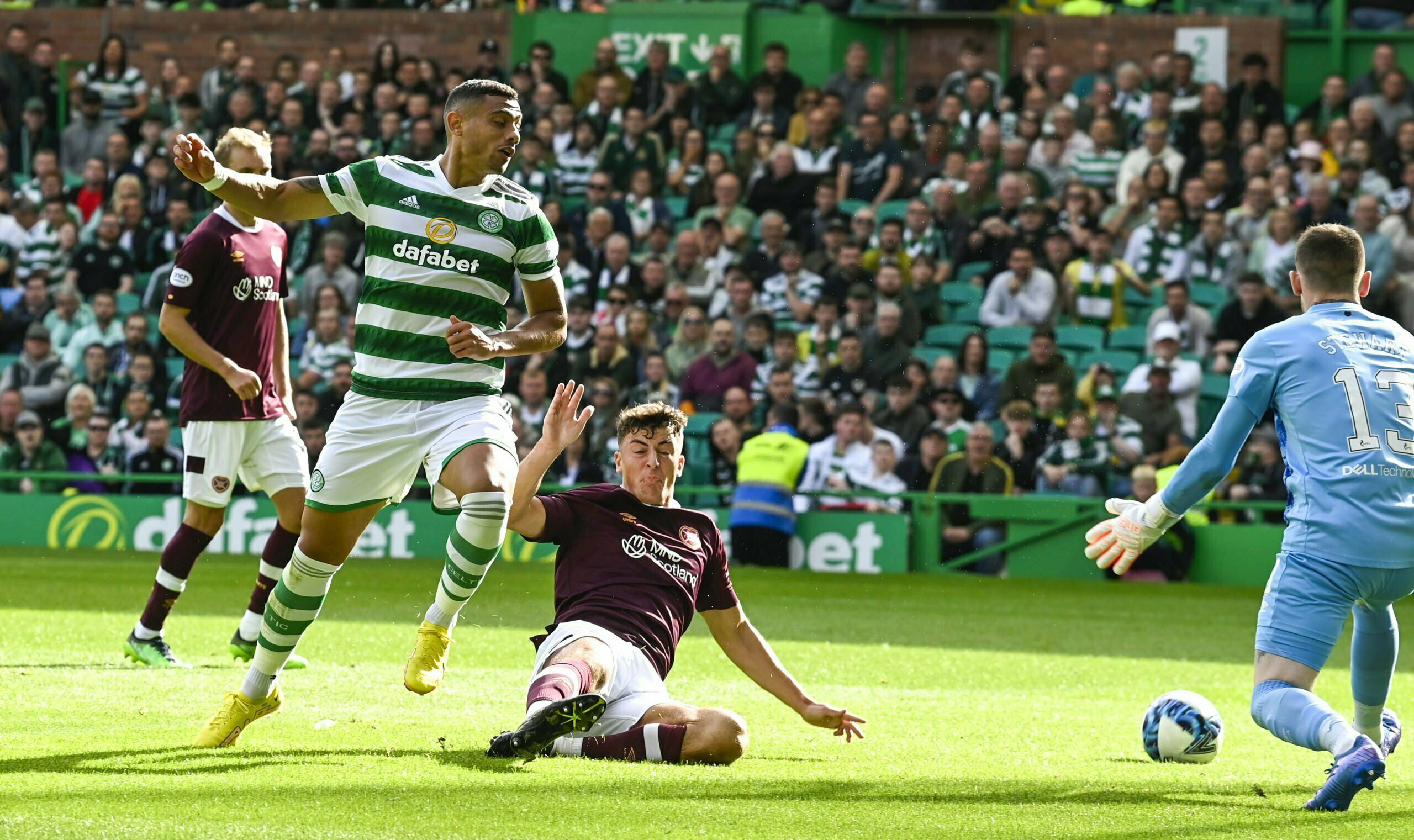 An early Kyogo strike and a late Giakoumakis goal sent Celtic back to the summit of the Premiership, as Hearts ended the game with 9 men after two late red cards.

In the battle of Glasgow vs Edinburgh, a team finished the game with nine men twice in as many days.

Celtic were looking to take advantage of Rangers’ slip up at Hibs yesterday and open up a two point gap at this early stage of the season.

Hearts meanwhile appeared to have one eye on their huge Europa League Play Off second leg against Zurich on Thursday, by making seven changes from last time out.

Captain Craig Gordon, talismanic forward Lawrence Shankland and the ever dangerous Barrie Mckay had all been omitted from the starting line up.

Prior to kick off the stadium paid their respects to the late John Hughes. ‘Yogi’, who was part of the Lisbon lions squad which won the European cup in 1967, passed away earlier this year.

It didn’t take long for Celtic to flex their attacking muscles as Kyogo Furuhashi put the home side ahead after 15 minutes. Some excellent work from Daizen Maeda out wide found his Japanese compatriot unmarked in the box, where the forward had a tap in.

The industrious Maeda continued to pressure the Hearts defence into mistakes as the home side began to turn the screw.

Postecoglou’s orchestra were dictating the tempo of the game and all of his front men were in tune as they waltzed the ball around the Hearts midfield.

Hearts finally made a clear opportunity on the half hour mark, but Josh Ginnelly couldn’t find a way past the advancing Joe Hart after some good work by former Celtic man Gary Mackay-Steven.

Despite Hearts holding strong, Maeda should’ve doubled the home side’s advantage 10 minutes before half time. The ball found him in the box but he could only direct his header straight into the arms of the grateful Ross Stewart.

Hearts would take confidence from the fact they were only one behind at the break, the question remained as to whether they would gamble on getting a result by rolling out their star turns from the bench with FC Zurich on the horizon.

The Edinburgh side went up several gears in the second half, pinning the champions back against their own box.

Celtic boss Postecoglou wasted no time in adapting to the Hearts dominance by reinforcing his midfield with the addition of Liel Abada and Reo Hatate.

On the 64th minute Hearts manager Robbie Neilson signalled his intent to get something from the game, introducing Shankland and McKay from the bench.

Despite a positive showing the second half, Hearts would rue their wasted set piece chances as they failed to give Joe Hart a proper test.

The away side’s frustration manifest itself in the 89th minute when they lost Alex Cochrane to a second yellow card as the midfielder was dismissed for a foul on Callum McGregor.

Before he could even get all the way down the tunnel, he was joined by team mate Toby Sibbick; the defender picking up a second yellow less than a minute later.

Celtic then swatted away any hope the visitors may have had of  an equaliser when substitute Giorgos Giakoumakis netted in the 92nd minute. The Greek forward got on the end of a Liel Abada cross, although it may have taken a deflection off Lewis Neilson on the way in.

What cannot be disputed though, is Celtic’s two point lead at the top of table. A gap that, even at this stage of then season, can provide a huge psychological advantage in the title race.