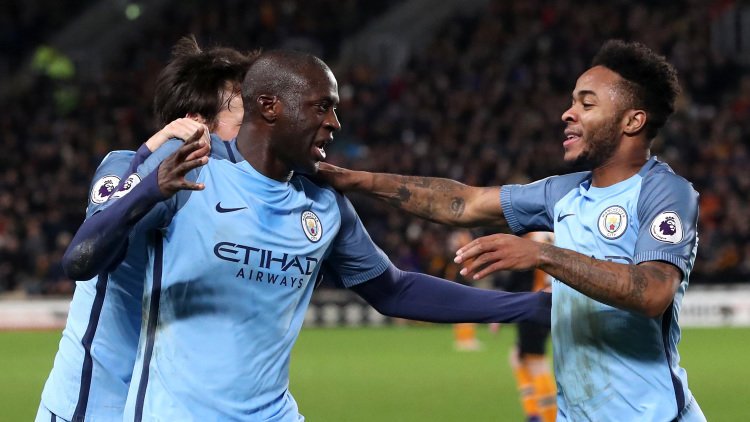 City grind it out at Hull

Three goals in the final 18 minutes saw Manchester City climb to second in the Premier League table courtesy of a laboured 3-0 win at Hull.

Mike Phelan’s Tigers frustrated Pep Guardiola’s title challengers for most of a drab encounter at the KCOM Stadium but Yaya Toure finally broke the deadlock with a 72nd-minute penalty.

Substitute Kelechi Iheanacho made victory certain by tapping in from close range six minutes later and the influential Raheem Sterling forced Curtis Davies to concede a late own goal.

Defeat was harsh on Hull, who have won just once in the league since August, after a battling display almost saw them take the lead when Bacary Sagna cleared off the line from Michael Dawson.

But the visitors could not afford to drop points, after leaders Chelsea won earlier in the day and with a tough trip to Liverpool next weekend.

Their quality came through in the end although, despite controlling possession, they lacked a creative spark.

With Sergio Aguero sitting out the final game of his four-match ban, they were also without a focal point.

They attacked at times with a four-man frontline of Kevin De Bruyne, Sterling, David Silva and Nolito, but chances still proved hard to come by.

Toure tested David Marshall from a long-range free-kick, Silva had another effort blocked, Nolito scuffed a shot and Sterling blasted over after a tricky run, but otherwise there was little goalmouth action in the first half.

Hull successfully soaked up a lot of pressure and looked to pounce on any City mistakes.

In a smart ploy, they also looked for Dieumerci Mbokani to run and test the perceived weak links of John Stones and Claudio Bravo.

Stones, however, after dealing with one tricky Mbokani charge, did not last on his return to the side. Recalled after sitting on the bench for the last two games, the England centre-back played just 18 minutes before limping off with what appeared to be a knee injury.

Hull did create a chance when the ball dropped to Jake Livermore outside the box but Bravo dealt comfortably with his shot.

The game livened up in the second half as City pushed for the breakthrough and Hull started to sense the possibility of an upset the longer it remained goalless.

De Bruyne went close to opening the scoring with a curling shot from the edge of the area which thumped against the inside of a post with Marshall beaten.

Hull threatened to make the most of the reprieve as a Robert Snodgrass free-kick caused panic in the City area and Aleksandar Kolarov unconvincingly turned behind.

Dawson beat Bravo with a looping header from the resulting corner but Sagna spared City by heading off the line.

Iheanacho came off the City bench to provide an outlet and got on the end of a De Bruyne cross but failed to trouble Marshall.

As in last week’s win over Arsenal it was Sterling who eventually forced the issue, cutting inside from the right and shaping to shoot before Andy Robertson took his legs.

It was a clear penalty and Toure made no mistake from the spot, sending Marshall the wrong way and allowing City to breathe a sigh of relief.

Iheanacho added the second as he finished off a slick move involving De Bruyne and Silva from close range.

Salt was rubbed into the Hull wounds in stoppage time as Davies turned into his own net from Sterling’s cross.