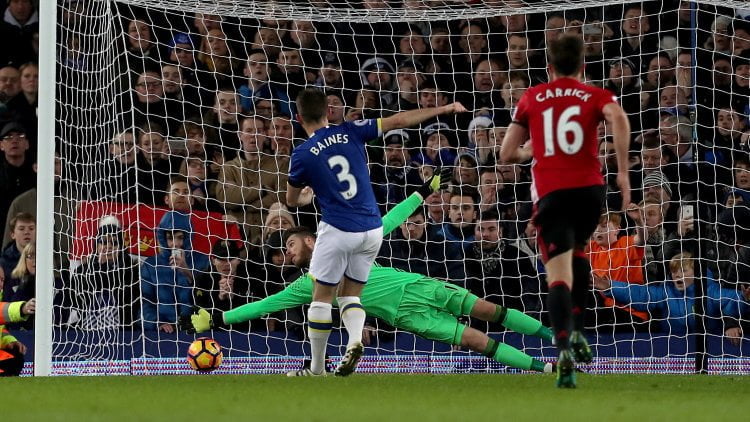 The summer appointments of Ronald Koeman and Jose Mourinho brought an injection of excitement to these clubs, yet both approached Sunday’s clash needing to kick-start their Premier League campaign.

Zlatan Ibrahimovic’s first-half lobbed effort looked set to have given United the victory, only for Marouane Fellaini’s calamitous challenge to gift former club Everton a penalty that Baines slotted home to secure a 1-1 draw.

It was a third straight draw in the league for Mourinho’s men, leaving them 13 points off the lead and nine points off a top-four berth.

Everton may have only won once in nine league matches but there was an air of relief around Goodison Park at the final whistle.

Marcos Rojo had somehow avoided an early red card for a two-footed lunge and Ibrahimovic put United ahead before the break, with his lob going in via the crossbar and post.

The veteran Swede may face retrospective action should he be deemed to have purposely caught Seamus Coleman’s head with his boot, but the main concern for Mourinho right now is another winless match.

It was solid end to a match that started poorly for the Toffees, with the first half punctured by groans from the Goodison Park faithful as their side struggled to muster a single shot on target.

United were not much better but Paul Pogba flashed an early strike over, before Anthony Martial, unaware the offside flag had been raised, forced Maarten Stekelenburg into a near-post stop.

Refereeing was the main talking point of a drab opening period as Gareth Barry somehow avoided a booking for a challenge on Ibrahimovic.

It was the 16th-minute decision to give Rojo a yellow card that was most perplexing, though. The Argentina defender started solidly, only to fly into a two-footed challenge on Gueye – a challenge that should have led to Michael Oliver dishing out a straight red card.

It was a reprieve for United, as was a Yannick Bolasie cross which evaded Kevin Mirallas at the far post, and one the visitors looked unable to build on before the break.

Barry’s belated booking looked to be the only thing for United fans to cheer until their side stepped things up before the break.

Ramiro Funes Mori, in for Phil Jagielka, got back brilliantly to thwart Henrikh Mkhitaryan, but Everton’s backline would be unlocked in the 42nd minute.

Martial hit a hopeful long ball from deep and Ibrahimovic kept his cool as Stekelenburg darted off his line, lobbing the ball from the edge of the box. The effort bounced onto the crossbar and post, before backspin took it over the line before Mori could hack clear.

A smattering of boos greeted the half-time whistle after another poor Everton display.

Koeman’s men certainly looked sharper and Mirallas forced a fine reaction save from De Gea after bursting into the box past Rojo.

Ibrahimovic saw a volley blocked having angered Everton players for a tussle with Coleman, catching the full-back’s head with his boot after tangling on the deck.

Whether it was intentional or not is up for debate, but Barry let the striker know his feelings.

The hosts’ anger was nearly compounded in the 60th minute as Mkhitaryan saw an effort blocked, before the ball was played out wide to Michael Carrick. The midfielder’s cross to the back post was chested by Ander Herrera and struck onto the post.

Koeman grimaced as Bolasie and Coleman were forced off in quick succession – but the Toffees rallied manfully in the closing stages.

A swerving Gueye strike stung the palms of De Gea, whose agility was put to the test when denying a Mason Holgate header.

A point-blank stop from substitute Enner Valencia followed as United looked set to hold out, only for Fellaini to cost his side victory.

Bringing down Gueye in the box allowed Baines the chance from the spot, which the left-back rifled home.

The home side pushed for a winner but had to make do with a hard-fought draw.