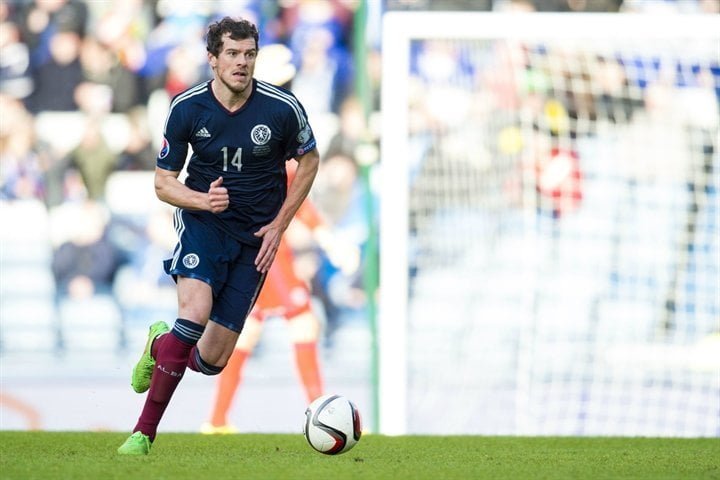 Greer: It will be great whoever turns up to watch Scotland

Gordon Greer has played down the significance of a Tartan Army boycott for Scotland’s match against Qatar at Easter Road on Friday, insisting it will be fantastic to represent his country regardless of the size of the crowd.

Much of the build-up has centred around the Scottish FA’s decision to go ahead with the game amid human rights issues and concerns about migrant workers’ conditions in the Arab nation, with Scottish fans threatening to stay at home in protest.

Nevertheless, Greer, 34, says it’s an honour to pull on the dark blue jersey alone and won’t be affected if there is a poor turnout in Edinburgh.

“When we’re up here [at Mar Hall] we don’t really read the newspapers. It’s not directly impacting us as such.
“We’re going to be playing the game and to represent your country in front of how many supporters it is, is fantastic at Easter Road.

“It will be great just to go out and play in front of whoever it is that comes to watch us.

“Hopefully there are a lot of Scotland fans there that get behind us at Easter Road and when we go to Ireland it will be mostly Irish fans.

“The away supporters have got a knack of out-singing the home fans so it will be a great game for us.”

Greer hasn’t had a competitive game since finishing off the season at Brighton in the English Championship on May 2 and he believes, ahead of the crucial Euro 2016 game against Republic of Ireland, that this match against Qatar is ideal preparation.

“I think it is really beneficial purely because I’ve had a lot of time off from playing. I think for a few of the boys who haven’t played in the Championship since May 2 or 3 it’s good to get a game before the Ireland game.

“Holding back? It’s a tricky question because sometimes when you go into games like that the thing you don’t want to happen ends up happening so you just go in and you give it your all.

“Hopefully we put in a good performance and everybody gets through it unscathed and we go into the next game ready for Ireland.

“After the campaign so far, it’s exciting for everyone to be a part of the squad. It’s an opportunity for all of us. We come up here and train hard. It’s up to us to show in training that we are ready for a game.

“I love playing for Scotland, I’d love to get another game but it’s up to the manager at the end of the day.”