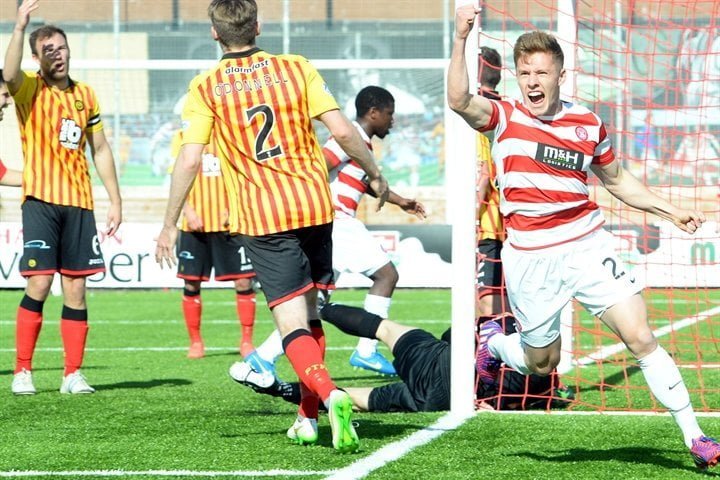 Hamilton Accies substitute Greg Docherty snatched a late share of the points against Partick Thistle with his first senior goal for the club.

The 18-year-old headed home from a corner five minutes from time to cancel out Stephen O’Donnell’s 71st minute opener at New Douglas Park.

The result keeps Accies on course to finish top of the bottom six.

Two injuries marred the first-half, though, as Mikey Devlin and Ryan Stevenson departed early through injury.

The Accies defender, who was stretchered off after five minutes, will go for a knee scan on Monday.

Thistle boss Alan Archibald was more optimistic about his player though, saying despite Stevenson catching his studs it wasn’t a bad knee twist.

Opening goalscorer O’Donnell felt the dry plastic pitch stopped the sides from playing. “I’m not a fan of a professional sport being played on plastic pitches at all,” he said.

“If it’s wet it’s ok but when you’re sliding you can rip your leg open.

“It was nice to get the goal,” he continued. “But I’m a defender and more importantly I was at fault for their goal so in the end mine meant nothing.”

Docherty, who has been at New Douglas Park since he was eight years old, was delighted with his goal.

“I’m speechless,” he said. “I can’t believe it’s happened. I didn’t know what to do when I scored.

“It’s brilliant, I’m so delighted. I now want to push on and establish myself at the club.”