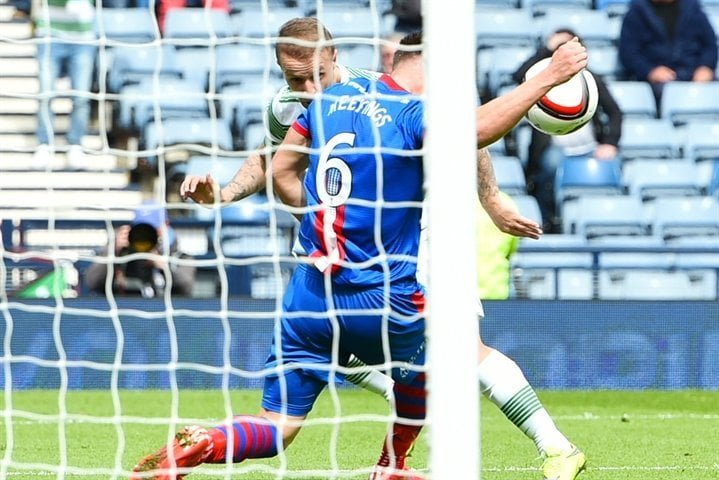 The head of referees John Fleming has backed his two officials after their Scottish Cup semi-final blunder in Celtic’s 3-2 defeat to Inverness CT.

With the Hoops a goal in front, Leigh Griffiths’ goal-bound header was blocked by defender Josh Meekings’ arm – a penalty and a red card offence had either referee Steven McLean or fifth official Alan Muir seen the incident.

Celtic wrote to the SFA demanding an explanation after they were inundated by fans but Fleming supported his two officials.

“I don’t think there was anyone in the ground who would have thought it was 100% a penalty and sending off until they had seen the replay,” he told the Evening Times.

“When you watch it again on TV you can see clearly that it has a handball, no question about that.

“But that is most apparent when the replay is slowed down and you watch it again.

“What we do is speak to the officials involved, we take their view on what happened, we look at a freeze frame on the incident in question and we then look at their positioning.

“Alan was a very short distance from the incident when it happened. For him to see properly when the ball was headed goalwards, he would have had to see through the head of the player [Meekings].

“So I can see why in real time it looked as though the ball hit his face.

“Steven could see through the gap in play as the game unfolded but there was a millisecond, a click of the fingers when his view was not 100%.

“In a situation like that when you cannot trust entirely what has happened you can’t give a penalty or a red-card.

“You need to be absolutely certain and if you’re not then you shouldn’t give it.”