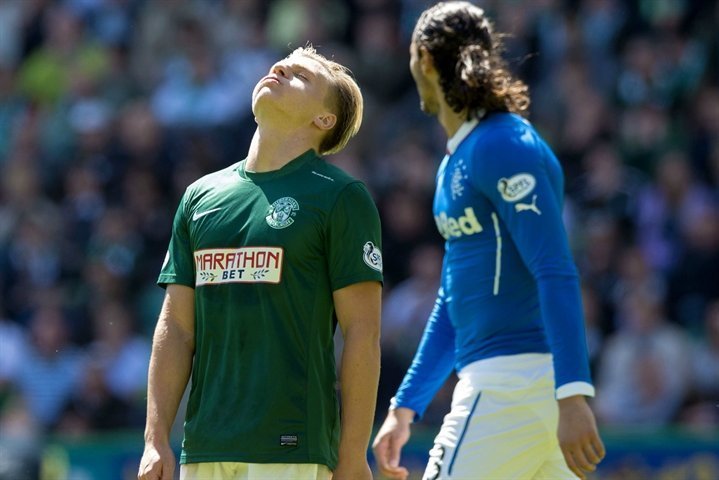 Hibernian 1-0 Rangers (1-2 agg): Cummings goal not enough as Gers go through to final

Jason Cummings’ wonderful late strike wasn’t enough for Hibernian as Rangers progressed through to the Scottish Premiership play-off final to face Motherwell after a 2-1 win on aggregate.

Alan Stubbs’ men trailed 2-0 from the first leg thanks to strikes from Nicky Clark and Kenny Miller but weren’t able to break down a resilient Rangers backline until in the dying embers of the game – and by then it was too late.

It was an uphill battle for the Edinburgh outfit, it was a match they dominated but they were toothless in attack with Cummings and Dominique Malonga passing up decent opportunities.

Cummings did grab his 21st goal of the season with an exquisite curling effort beyond goalkeeper Cammy Bell leaving Hibs and Alan Stubbs to ponder what might have been.

In the opposition dugout Rangers boss Stuart McCall admitted his team were drained after three games in six days.

“The good thing is the first game isn’t until Thursday,” he said. “The lads have just heard two words they’ve not heard for months – ‘day off’.

“They won’t be in tomorrow and even they are surprised at that.

“But Murray Park has fantastic facilities. They will get massaged, they will get looked after and will be ready to go on Thursday.

“They have got all June to be tired. We’re not celebrating now, we’re too tired to celebrate. We’ve done nothing yet, we’ve just given ourselves an opportunity.”

For Hibs it’s another 12 months in the Championship but manager Stubbs felt his side did enough over the two legs to win the tie.

“It always tough when you don’t progress. I don’t think anybody could have argued if it had been us going through,” he said.

“I didn’t think there was an awful lot between the teams. We just needed to score a bit earlier than we did.

“I thought the referee allowed them to take all the time in the world. It took 75 minutes before he cautioned a player for wasting time.

“These are just little things but they all add up. If I was in Rangers’ boots I’d have been taking my time but I thought the referee could have done something about it a lot earlier.

“However, for the amount of possession we had, Rangers defended well. I would have just liked to have scored a bit earlier and tested their resolve even more.

“I honestly feel if we can keep the team together, we’ll go up automatically next year. You know me, I’m not one for making predictions, I don’t believe in them but I honestly believe we’ll go up next year.

“I think the team’s good enough, I want to try to take all these play-off games out of the equation and do it the way Hearts have done it this year.”