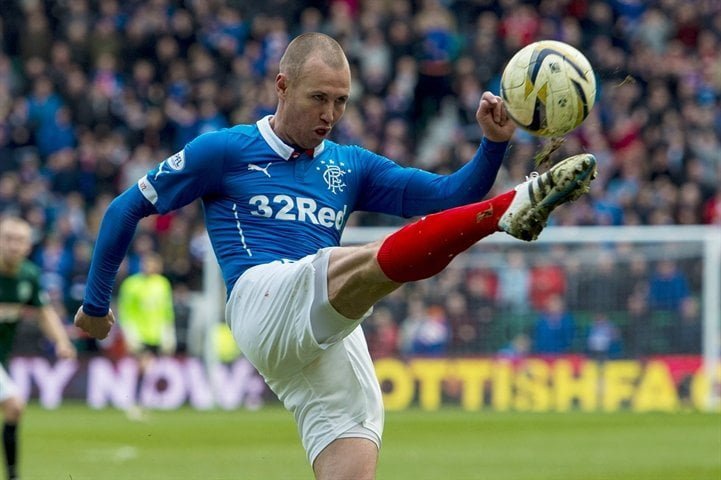 Rangers striker Kenny Miller says he’s desperate to stay at the club for another season and help return them to the top of Scottish football.

“I want to stay where I am. I’ve said before I love the place,” he told Peter and Roughie’s Football Show.

“My goal when I came back was to help the team get promoted and then ultimately get back to the top of Scottish football and challenging for that league.”

The 35-year-old also warned his side they cannot afford to let their standards slip in the play-offs.

The Light Blues take with them back to Ibrox a slender advantage after a 2-1 victory over Queen of the South at Palmerston in the first leg.

A draw or better against the Doonhamers will secure a meeting with Hibernian before the winner of that tie plays the side in 11th in the Scottish Premiership for a place in the top flight next season.

And Miller is under no illusions of what is required from Stuart McCall’s men.

“We need to string performances together because if we are under par against Queen of the South, Hibs, Motherwell, Ross County or Kilmarnock – whoever it’s going to be in the Premiership – we’ll get beat and get beat well as we seen down at Palmerston this year when we were slightly off it,” he told Peter and Roughie’s Football Show.

“We can’t allow that to happen at any stage in the play-offs. They’ve scored against us at Ibrox this season already.

“The way they play they are always going to cause teams problems. We are aware of that it’s not as if we’ve won 2-1 down there and think it will be a cakewalk.

“We’re going to have to be switched on because they are a dangerous team with very good players.”