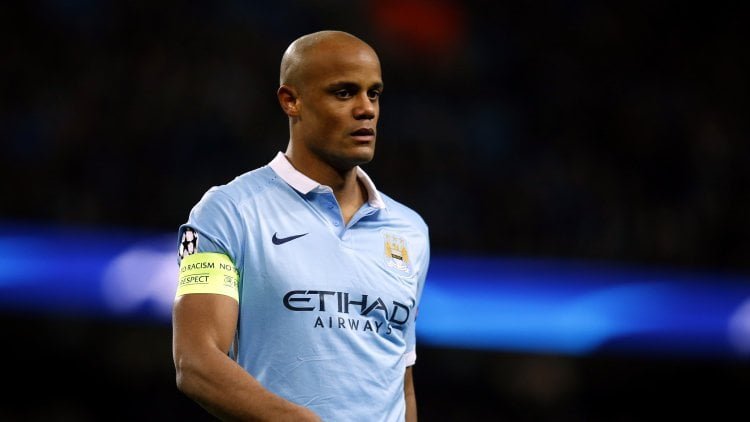 Kompany waits to find out extent of injury

Manchester City are waiting to learn the extent of Vincent Kompany’s latest calf injury amid fears he could miss most of the rest of the season.

The City captain pulled up just five minutes into the goalless draw against Dynamo Kiev on Tuesday that secured the club’s place in the Champions League quarter-finals for the first time.

Confirmation soon came that the 29-year-old had suffered yet another recurrence of the calf trouble that has blighted his career in recent seasons.

It is the 13th time the Belgium defender has been out with a calf problem since the start of the 2011-12 season, and the fourth during this campaign alone.

Manager Manuel Pellegrini said he would expect Kompany to be out for a “minimum of one month”, but feared it could be as much as “three quarters of the rest of the season”.

Even in the best-case scenario, that would definitely rule him out of the Champions League quarter-finals and up to five Barclays Premier League games. With City facing a challenge to hold onto their top-four place, it is a huge blow.

Kompany is vital to City’s success, and statistics this term underline just how much. In 19 games with him in all competitions, they have lost three and conceded 13 goals. In 27 without him, they have been beaten nine times and shipped in 39.

The game against Kiev was just his seventh appearance, and his sixth in succession, since returning from his previous setback.

Interestingly, he had been speaking about his numerous problems in an interview in the matchday programme.

He said: “I am philosophical. Setbacks are a part of life and I like to think that my nature means I can rise to any challenge.

“I don’t let myself get beaten down by anything, so I have viewed these injuries as just another challenge that needs to be won.”

The right-back said: “It is a shame. It has been a very disappointing season for Vinny, but we know Vinny. He will come back stronger than ever.

“I know these situations sometimes get people down, but not Vinny. Hopefully it is not too bad and he can recover as soon as possible.”

The injury to Kompany, and another less serious one to Nicolas Otamendi, took the shine off what was otherwise a good night – even though the game itself was a dull one. The goalless draw at the Etihad Stadium ensured last month’s 3-1 victory in Kiev was enough to secure progress.

Zabaleta said: “We are very pleased. We have been working really hard for this, to try to go through in the Champions League. We know how difficult this competition is.

“We need to be satisfied for this, but now we await the draw and to see who is the next team to play against.”