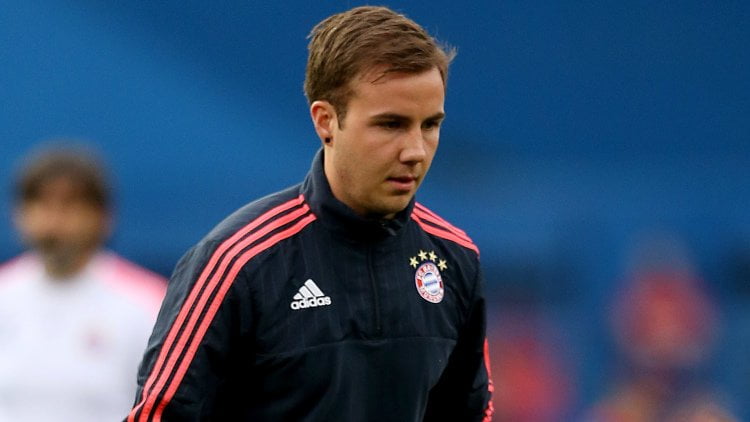 Liverpool given renewed hope over Gotze

Liverpool have been given renewed hope in their pursuit of Mario Gotze after Bayern Munich chief executive Karl-Heinz Rummenigge suggested the midfielder may struggle for pitch time again next season.

The 23-year-old, who is entering the final 12 months of his contract, made just 11 Bundesliga starts this campaign under departing manager Pep Guardiola.

And despite the Germany international stressing earlier this week he was looking forward to life under new boss Carlo Ancelotti, Rummenigge has cast doubt over how much he will actually play.

“We made everything clear to Mario,” he told German newspaper Kicker.

“Mario has to consider for himself whether he wants to constantly get minutes.”

Liverpool manager Jurgen Klopp has made Gotze one of his priority signings for this summer as he is keen to be reunited with a player who was so successful under him at Borussia Dortmund.

Klopp is also in the market for a left-back and while he is pursuing a deal for Leicester’s £4million-rated Ben Chilwell he also appears to be interested in Lorient’s Raphael Guerreiro, who would cost around £9million.

“He will only be transferred if a club makes an offer that we can’t refuse.

“For the moment four major foreign clubs, including Dortmund and Liverpool, have made an offer.

“The fourth one shouldn’t take too long to be made (officially) but for the moment none of them satisfy us.

“We’re calm. We don’t need to sell to balance the books.”

While Klopp is trying to bring in reinforcements he is also ready to offload a few players and AC Milan’s decision not to make Mario Balotelli’s loan deal permanent came as no great surprise.

Press Association Sport understands the club gave the striker’s agent Mino Raiola permission to seek out prospective suitors as long ago as February, with China and Turkey likely destinations.

“Besiktas is one of those interested in Martin but we’re haven’t reached a point where I can confirm Martin is going there, or anywhere else,” he told TV Markiza in Slovakia.

“But I can say that it is 90 per cent sure Martin will leave Liverpool, but it is far from closed.”

Liverpool have announced four pre-season domestic friendlies ahead of their trip to the United States in July.

They will face Tranmere on July 8, Fleetwood on July 13, Wigan on July 17 and Huddersfield – managed by Klopp’s close friend David Wagner – on July 20 before heading out to California where they will play Chelsea and AC Milan.

The Reds’ pre-season preparations conclude against Barcelona at Wembley on August 6.