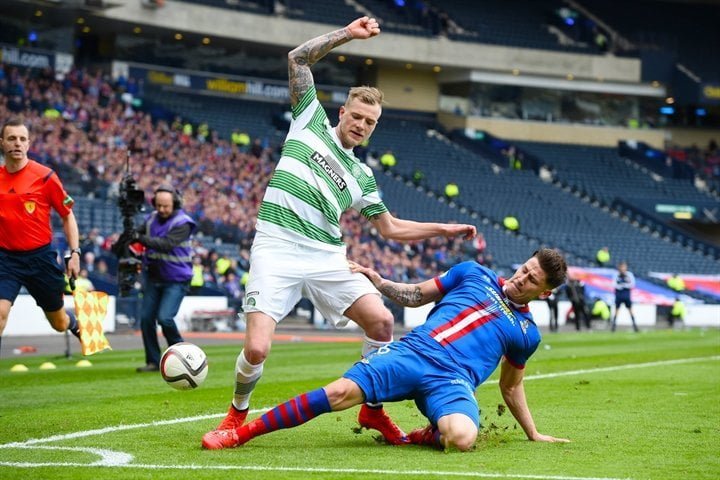 Inverness CT defender Josh Meekings has been cleared to play in the Scottish Cup final in May after his retrospective ban was dismissed at Hampden on Thursday.

Meekings was cited and offered a one-game suspension for “deliberate” handball in the Caley Jags 3-2 semi-final victory over Celtic by the SFA’s compliance officer Tony McGlennan after both the referee Steven McLean and fifth official Alan Muir missed Leigh Griffiths’ goal-bound header striking the arm of the defender.

In the aftermath Celtic wrote a letter to the SFA demanding why such an obvious handball had been missed by the officials before Meekings was served his notice of complaint by McGlennan.

That was met with further bemusement with Fifa’s vice-president and referees committee chairman Jim Boyce condemning the decision to punish Meekings.

But on Thursday the SFA disciplinary panel returned a verdict clearing the 22-year-old of any wrongdoing.

I have seen the support from various clubs fans and I’m very thankful. I can look forward to the final now, and get ready for Saturday!

Inverness chairman Kenny Cameron said: “The club is delighted for Josh that the judicial panel tribunal dismissed the complaint brought against him.

“Josh will now be available for selection for the Cup final on 30th May 2015 v Falkirk FC.

“The result means that the club can now fully appreciate the achievement of reaching its first ever Scottish Cup Final and focus on preparations for Saturday’s game versus Aberdeen FC.

“On a personal note, both Josh and I would like to express our gratitude to our legal team from Harper Macleod led by partner David Kerr, who worked tirelessly to ensure a favourable outcome.”

The Players’ Uniion PFA chief executive Fraser Wishart admitted concern that to take retrospective action for an issue like this was going into “murky waters”.

“This regulation changed just to take care of violent incidents,” he said.

“But when this was mooted to me 18 months ago, I did warn the SFA that I felt it was going too far. Originally it was about a tackle that the referee could see but just couldn’t see the contact.

“If you are going to legislate for every single incident, you are going to find yourself in murky waters. I did put that opinion forward, that it was going to cause more problems than it solves. You can’t just react to one incident and change the rules to suit.

“Sadly for Josh Meekings, he has been caught up in this storm.”