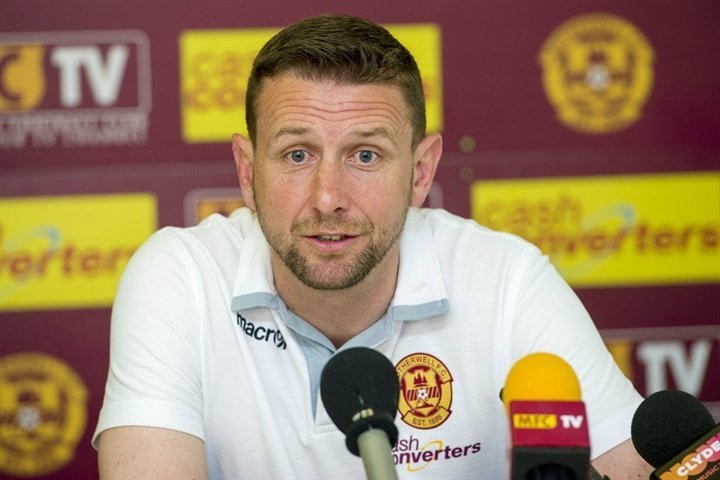 Motherwell boss Ian Baraclough has urged his side to thrive on the pressure of playing in front of a partizan crowd against Rangers.

The Steelmen face the daunting prospect of a first-leg play-off final against the Light Blues at a sell-out crowd at Ibrox on Thursday.

And Baraclough hopes his team will relish rather than feel overawed by the occasion.

“That is the home and away scenario. We know that it will be a fervent crowd and we are going to have to silence them as much as we can.

“But as a player I wanted to thrive on that, I wanted to silence the crowd and put them on the back foot a little bit and it can turn against the home team and that is what you want to do as an opposition.

“Not to be intimidated by it, but really inspired by it.”

The Lanarkshire outfit had hoped for nearly 2,000 briefs for the game but have only been allocated 950 tickets.

While Rangers have also had their ticket allocation slashed for the return leg as they will only be given 1500 tickets housed in the away stand at Fir Park which fills 4,500.

Nevertheless, Motherwell boss Baraclough refused to be drawn into the ticket feud.

“I’m not going to get involved in a ticket row. We have been what we have and we have to get on with that.

“Rangers have been given 1,500 or so, and that has to be dealt with in their own way.

“We asked for three per cent (but got 1.8 percent) of what their ground holds and we have given them 11 cent, that is quite fair isn’t it?”

The Fir Park boss hopes the home support can help give them the edge in the return leg.

“It depends on what noise our fans can generate and whether we inspire our fans to make a good noise and thart is our job.

“The crowd have really got behind the players when we have got on our game.

“I am envious. I wish I was a player at this time.

“Everyone wants to be involved in our game. We had rather have not been in the play-offs but we have to relish it. When you win it is a great feeling and I want us to experience that winning feeling.

“Are Rangers favourites? They are the bigger budget, the bigger club, financially, the new owner coming in there has given them a little bit of stability.

“A lot of media attention has been given them their place back where they should rightfully be and hopefully that is a little bit previous.

“And that comes across as something that has been given to them before they have earned it.

“There are two teams in this play-off and whichever teams comes out on top will have earned the right to be in the top division.

“I am sure that is what Stuart will be saying to his squad, he has been in the game long enough and I don’t think the players will be getting above their station, thinking that they are already there.

“A lot of the media build-up has been that possibly the winner of the Hibs v Rangers sem-final was going to be promoted.

“I think people have written us from the off on this one. And that feeling of upsetting the odds appeals to me. I would love to turn it on his head.”